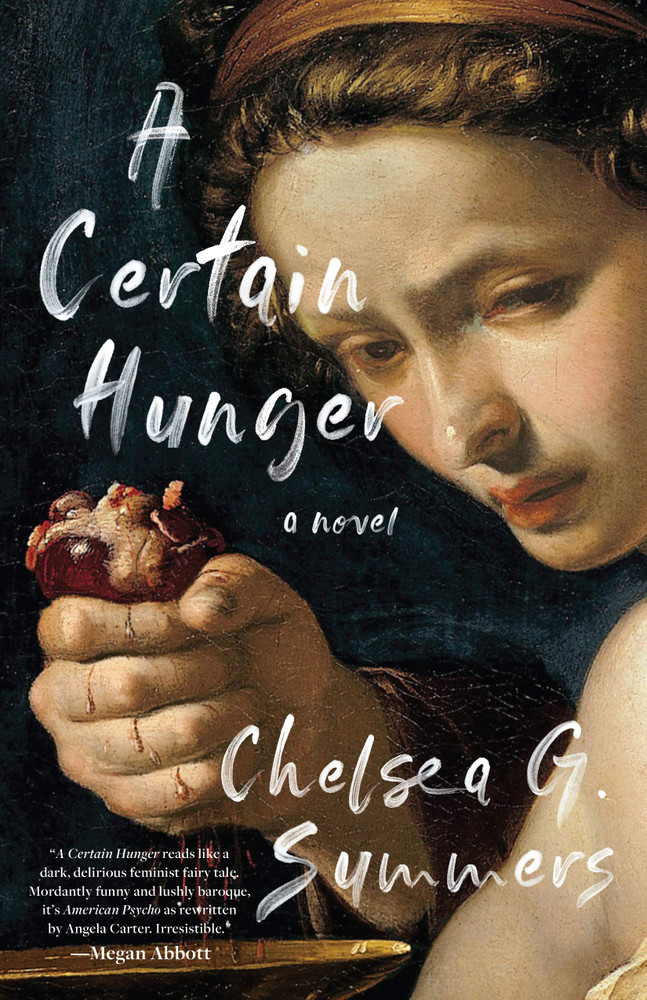 “One of the most uniquely fun and campily gory books in my recent memory... A Certain Hunger has the voice of a hard-boiled detective novel, as if metaphor-happy Raymond Chandler handed the reins over to the sexed-up femme fatale and really let her fly." ―The New York Times

Food critic Dorothy Daniels loves what she does. Discerning, meticulous, and very, very smart, Dorothy’s clear mastery of the culinary arts make it likely that she could, on any given night, whip up a more inspired dish than any one of the chefs she writes about. Dorothy loves sex as much as she loves food, and while she has struggled to find a long-term partner that can keep up with her, she makes the best of her single life, frequently traveling from Manhattan to Italy for a taste of both.

But there is something within Dorothy that’s different from everyone else, and having suppressed it long enough, she starts to embrace what makes Dorothy uniquely, terrifyingly herself. Recounting her life from a seemingly idyllic farm-to-table childhood, the heights of her career, to the moment she plunges an ice pick into a man's neck on Fire Island, Dorothy Daniels show us what happens when a woman finally embraces her superiority.

A satire of early foodieism, a critique of how gender is defined, and a showcase of virtuoso storytelling, Chelsea G. Summers’ A Certain Hunger introduces us to the food world’s most charming psychopath and an exciting new voice in fiction.

"In this magnetic and satirical debut, Chelsea G. Summers gives us a different kind of food narrative. Dorothy Daniels is a food critic, master cook, and lover of sex. She’s passionate about everything she does. Including, unfortunately, murder. This one isn’t for the squeamish, as cannibalism is involved, but it is a fairytale-like romp with feminist themes, so if you’re looking for a horror-ish yarn that also involves some great food scenes (and not just the human flesh kind), keep an eye out for this one – perfect for those dark winter afternoons." ―Shondaland

"A Certain Hunger is a hearty novel that, despite its graphic themes of murder, flesh eating, sex, and the dessert menu, is also quite funny. With direct jabs at toxic masculinity and razor-sharp awareness of feminist tropes, Chelsea G. Summers’s novel is a slasher-sexy, rich satire." ―Foreword Reviews

“For those who can stomach it, A Certain Hunger, by Chelsea G. Summers is a macabre banquet of a suspense novel serving up carnal and gustatory surprises...Dorothy speaks like Humbert Humbert and behaves like Hannibal Lecter."―Maureen Corrigan (of NPR's Fresh Air) in the Washington Post

"Chelsea G. Summers' A Certain Hunger is easily the most distinctive and unforgettable crime novel of this year, a delicious soupcon of satire." ―Sarah Weinman, author of The Real Lolita

"Food and murder and a female psychopath! These are all things I like and need to have on my bookshelf."―Lit Hub's Most Anticipated Books of the Fall

"This book is crazy. You have to read it."―Bon Appetit Magazine

"A Certain Hunger is as hot and mean and ruthless as its heroine. Summers’ novel is a lush banquet of sensory delights, but just under the surface, there’s a slick, hard, unassailable core of female rage. This is the monster I didn’t know I wanted.” ―Jude Ellison Sady Doyle, author of Dead Blondes and Bad Mothers: Monstrosity, Patriarchy, and the Fear of Female Power

"The perfect novel for smart, cultured, angry women everywhere. With wicked wit, A Certain Hunger educates, entertains, shocks, and delights, and―if you're not careful―may just tempt you to embrace your inner cannibal." ―Alma Katsu, author of The Hunger and The Deep

“Riotously funny and deliriously unhinged, Chelsea G. Summers's A Certain Hunger is the perfect send-up of foodie culture, media, and serial killers-as-sex objects. Patrick Bateman and Hannibal Lecter have nothing on Dorothy Daniels, a 51-year-old food critic, who has an appetite for food and life, sure, but also for killing men… an altogether delicious, deranged read.” ―Refinery29

"A Certain Hunger is as hot and mean and ruthless as its heroine. Summers’ novel is a lush banquet of sensory delights, but just under the surface, there’s a slick, hard, unassailable core of female rage. This is the monster I didn’t know I wanted.” ―Sady Doyle, author of Dead Blondes and Bad Mothers: Monstrosity, Patriarchy, and the Fear of Female Power

Chelsea G. Summers is a freelance writer whose work focuses on sex, politics, tech, fashion and culture. She is a former academic and professor with Ph.D. training in eighteenth-century British literature, a discipline that has proven to be shockingly useful when writing about contemporary culture. She was a columnist for the now defunct ADULT magazine, has a piece upcoming in Roxane Gay’s Medium series, and her work has appeared in VICE, Fusion, Hazlitt, The New Republic, Racked, and The Guardian. She splits her time between New York and Stockholm, Sweden, and can be found on twitter @chelseagsummers. This is her first novel.