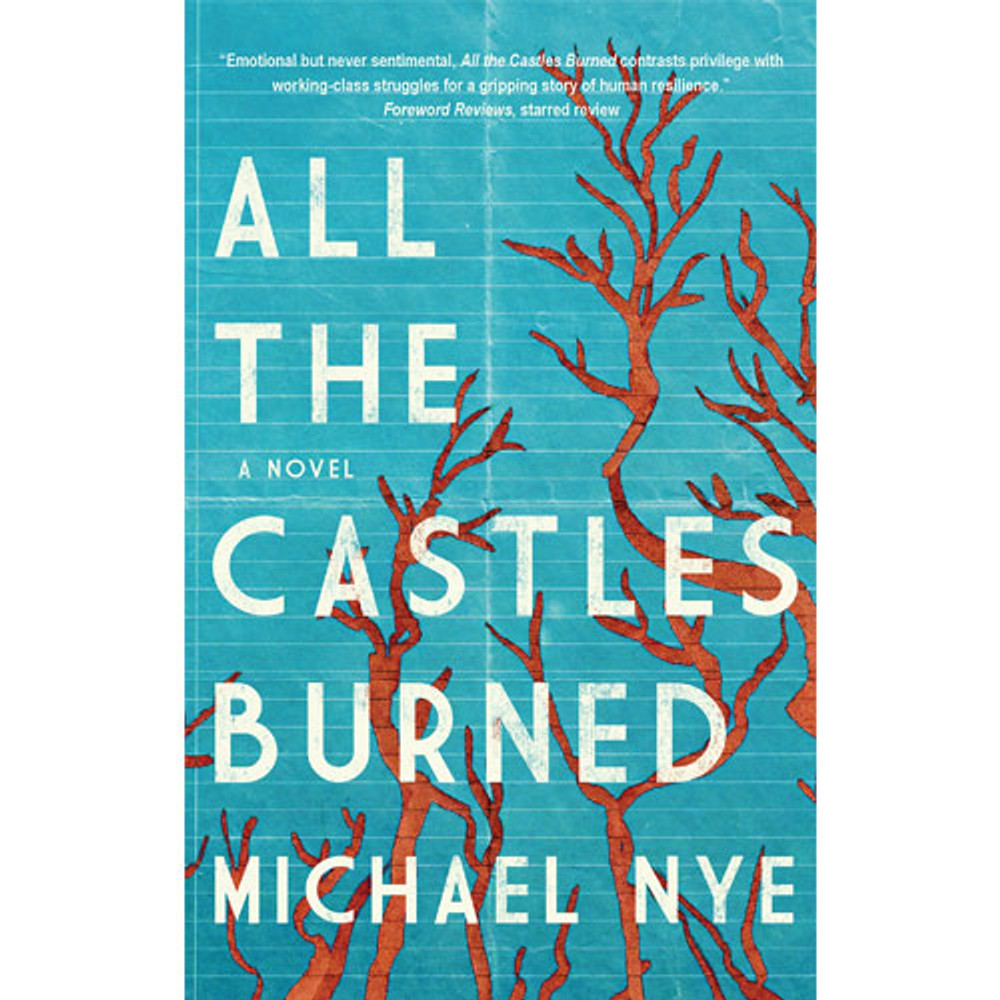 All the Castles Burned

When Owen Webb, the son of working-class parents, receives a scholarship to the prestigious Rockcastle Preparatory Academy, the mysterious and enigmatic Carson Bly, an upperclassman from a wealthy and powerful family, befriends him. Their friendship, deepened through a love of basketball, becomes an obsession for Owen, who is desperate to avoid the growing trouble at home between his parents. When Owen's father is arrested for a shocking and unexpected crime, his family is torn apart, and Owen's anger and fear are carefully manipulated by Carson's mercurial and increasingly dangerous personality. Owen, who has fallen in love with Carson's beautiful but troubled sister, quickly finds himself caught up in a complex web of lies that threatens his once-promising future.

"Emotional but never sentimental, ALL THE CASTLES BURNED contrasts privilege with working-class struggles for a gripping story of human resilience."―Foreword Reviews, starred review

“This is a coming-of-age story with mysterious twists, a sports buddy novel that is surprisingly sensitive, and a novel of manners contrasting the aspirations of a dysfunctional middle-class family in 1990s Cincinnati with the over-the-top wealth of another dysfunctional family. It is both an appealing read and an introspective examination of the turbulence of male adolescence. Just as Nye's characters are glued to the O.J. Simpson trial, readers won't want to look away.”―Kirkus Reviews

"To read Michael Nye's ALL THE CASTLES BURNED is to immerse oneself in a fully realized world, and a narrative so confidently executed by its author that upon finishing, one should expect a diploma from its Rockcastle Preparatory Academy. Owen Webb and Carson Bly should resonate with anyone who has fallen under the spell of a new friendship, replete with all of its mysteries, attractions, and anxieties. ALL THE CASTLES BURNED is the rare book that bonds itself to the reader immediately, and hangs on until the very last page."―James Scott, author of the national bestseller The Kept

"Michael Nye's ALL THE CASTLES BURNED is a kinetic, haunting, and gorgeously written debut novel. Nye accomplishes the tremendous feat of narrating the immediacy of youth alongside the long retrospective of nostalgia, drawing readers into Owen Webb's obsessive high school friendship with Carson Bly. Each page is marked by danger and a ratcheting sense of menace, and yet we also come of age with Owen and experience the heartbreak he feels. This novel is compulsive, harrowing and beautifully rendered, and I couldn't put it down."―Anne Valente, author of Our Hearts Will Burn Us Down

"With ALL THE CASTLES BURNED, Michael Nye claims his place as one of the best new novelists in America. This is an expertly written and crafted story about coming-of-age in a country where class and ambition still clash violently. The characters live and breathe with every page, and there's never a doubt that you're in steady hands."―Jared Yates Sexton, author of The People Are Going to Rise Like the Waters Upon Your Shore: A Story of American Rage

"Michael Nye’s sharp and vivid prose is as seductive as the promise of undiscovered truths that pulls his young protagonist into an older boy’s shadowy web. Artfully written and beautifully evocative, ALL THE CASTLES BURNED is a dazzling cautionary tale of adolescent longing for friendship and love, adventure and rebellion. I loved it."―Alex George, author of Setting Free the Kites and A Good American

"ALL THE CASTLES BURNED pulses with hostility, deceit, and our propensity to fit in at all cost. It demands we see the outsiders and everything else we all too often willfully disappear, like honor and love. It hums with the hope that we can recover ourselves, if we dare.”―Ethel Rohan, author of The Weight of Him

"A eerie kind of sensitive menace looms over every page of ALL THE CASTLES BURNED and Michael Nye builds this beautiful and full-throated story of boyhood friendship and jealousy and anger and love, and then tears it down as these boys call forth the fierce changes they've been longing for all of their lives."―William Lychack, author of The Architect of Flowers

"An erudite tale of boyhood, class struggle, and heartbreaking nostalgia."―Levis Keltner, author of Into That Good Night

"Michael Nye's work is like a richly detailed tapestry, the weaving intricate and compelling. The characters cause the actions because of who they are, and are revealed by what they do and what they fail to do. In other words, as in the best works in our literary canon, Nye's characters and plots cannot be separated, and we would never want such a separation."―Mary Troy, author of Beauties and Swimming on Hwy N

"One of the best coming-of-age novels I've ever read. Nye captures the real and tragic-beauty of growing up in America. From the classroom, to the basketball court, to the first kiss, ALL THE CASTLES BURNED will stay with you long after you finish the last page."―William Jensen, Pushcart Prize-nominated author of Cities of Men

"ALL THE CASTLES BURNED is a fierce and gleaming testament to what is possible when an outsider steps into the world of the privileged elite. A mind-blowing debut."―Fred Venturini, author of "Gasoline" (Chuck Palahniuk's Burnt Tongues collection feature) and The Heart Does Not Grow Back

"As Michael Nye’s protagonist Owen figures out who he is and who he wants to be, the reader gets to share in all the danger and emotional suspense of that becoming. I want to say this book is a love letter to a sport, a city, and a boy’s teenage years, so full of both possibility and uncertainty. But the love here is complicated, with a deep and moving understanding of how a place, a sport, a life, can be filled with desire and anger and fear, and the potential for violence."―Caitlin Horrocks, author of This Is Not Your City

"The joy of reading this novel is in the depth of Nye's interest in Owen and in the complexity of his adolescent world - the forces of family, class, and culture that drive him toward crisis. A compassionate and richly detailed debut."―Sarah Cornwell, author of What I Had Before I Had You

ALL THE CASTLES BURNED is a shining debut that bursts with all the energy and desires of youth. In elegant and expressive prose, Michael Nye applies his singular voice to the fine tradition of the prep school novel, creating an unforgettable story that will haunt you long after you turn the last page.―Keija Parssinen, author of The Ruins of Us & The Unraveling of Mercy Louis

Michael Nye is the author of the story collection Strategies Against Extinction (Queen’s Ferry Press, 2012). He was born and raised in Cincinnati, Ohio, and attended Ohio State University, where he graduated with a BA in English Literature, and the University of Missouri-St. Louis, where he earned his MFA in creative writing. His fiction and nonfiction have appeared in American Literary Review, Boulevard, Cincinnati Review, Crab Orchard Review, Epoch, Kenyon Review, New South, Normal School, Sou’wester, and South Dakota Review, among many others. His work has been a finalist for the Katherine Anne Porter Prize in fiction and nominated for the Pushcart Prize.

We All Loved Cowboys