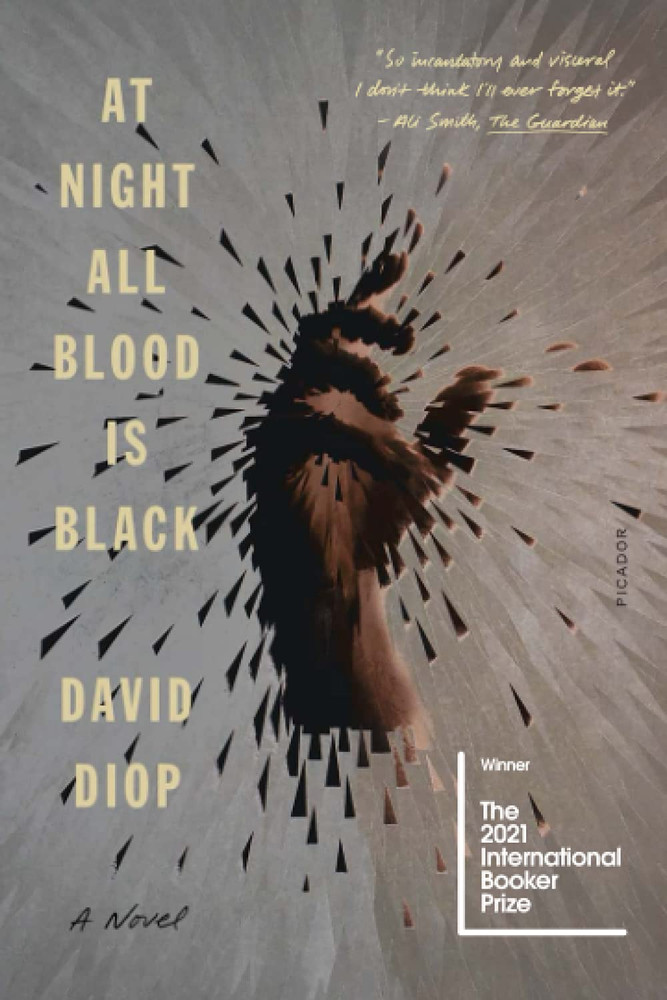 At Night All Blood is Black

"Astonishingly good." ―Lily Meyer, NPR
"So incantatory and visceral I don’t think I’ll ever forget it." ―Ali Smith, The Guardian | Best Books of 2020

Selected by students across France to win the Prix Goncourt des Lycéens, David Diop’s English-language, historical fiction debut At Night All Blood is Black is a “powerful, hypnotic, and dark novel” (Livres Hebdo) of terror and transformation in the trenches of the First World War.

Alfa Ndiaye is a Senegalese man who, never before having left his village, finds himself fighting as a so-called “Chocolat” soldier with the French army during World War I. When his friend Mademba Diop, in the same regiment, is seriously injured in battle, Diop begs Alfa to kill him and spare him the pain of a long and agonizing death in No Man’s Land.

Unable to commit this mercy killing, madness creeps into Alfa’s mind as he comes to see this refusal as a cruel moment of cowardice. Anxious to avenge the death of his friend and find forgiveness for himself, he begins a macabre ritual: every night he sneaks across enemy lines to find and murder a blue-eyed German soldier, and every night he returns to base, unharmed, with the German’s severed hand. At first his comrades look at Alfa’s deeds with admiration, but soon rumors begin to circulate that this super soldier isn’t a hero, but a sorcerer, a soul-eater. Plans are hatched to get Alfa away from the front, and to separate him from his growing collection of hands, but how does one reason with a demon, and how far will Alfa go to make amends to his dead friend?

Peppered with bullets and black magic, this remarkable novel fills in a forgotten chapter in the history of World War I. Blending oral storytelling traditions with the gritty, day-to-day, journalistic horror of life in the trenches, David Diop's At Night All Blood is Black is a dazzling tale of a man’s descent into madness.

"Beguiling . . . Diop realizes the full nature of war―that theater of macabre and violent drama―on the page. He takes his character into the depths of hell and lets him thrive there . . . As violent and disturbing as these encounters are, they are rendered with such artistic grace that one derives a strange pleasure in reading about even the bloodiest of nights." ―Chigozie Obioma, The New York Times Book Review

"Powerfully original . . . Unflinching in its exploration of the madness war can induce, Diop’s novella is a remarkable piece of writing." ―Nick Rennison, The Times (London)

"The International Booker prize winner is a brilliant, shifting tale . . . [At Night All Blood Is Black] rewards rereading, which recasts the violent opening chapters in a new, even darker light . . . Quite unlike anything else." ―John Self, The Observer

"As in many of the best novels of active combat . . . Diop accentuates tragedy with bitter irony . . . There is great beauty here. Diop’s sentences have a tidal quality, carrying in phrases worn smooth with repetition." ―Jessi Jezewska Stevens, Foreign Policy

"[David Diop] conveys the overwhelming impact of wartime trauma on a bewildered young man in lyrical language, translated by [Anna] Moschovakis into rhythmic and dynamic English prose." ―The Economist

"A stunning new novel about the plight of two Senegalese soldiers in the Great War offers a fresh perspective. It also introduces a singular talent . . . An immersive, propulsive read, one that searingly evokes the terrors of trench warfare, the relentless loss of life, and the irreparable damage inflicted on the human soul . . . Employing language that is, by turn, visceral and lyrical, Diop tells a devastating story of loss and inhumanity while enlarging our understanding of the war to end all wars." ―Malcolm Forbes, Star Tribune

"Heartbreaking and poetic . . . [At Night All Blood Is Black] addresses a story woefully absent from French history books – the inner life of African troops who fought in the French trenches in the first world war." ―Angelique Chrisafis, The Guardian

"One could recommend this novella by its name alone. Fortunately, what its evocative and ominous title hints at―a dark story told in lyrical prose―is more than delivered on in David Diop’s rhythmic, enchanting fiction (expertly translated from the French by Anna Moschovakis) . . . More than anything [Diop] shows just how slippery the self can be when individuals are placed within extraordinary, violent circumstances." ―The A.V. Club

"With elegant brevity, Diop presents a world with no firm dividing line between courage and madness, murder and warfare; the most dedicated killers are awarded the Croix de Guerre. Alfa’s final transformation, as he attempts to atone for his guilt over the death of his friend, is unexpected, poetic ― and chilling." ―Suzi Feay, The Spectator

"[A] harrowing, nimbly translated English-language debut . . . Diop is sure to earn readers with this feverish exercise in psychological horror.” ―Publishers Weekly

"An extraordinary novel, full of sadness, rage and beauty." ―Sarah Waters, author of The Little Stranger

"David Diop’s All Blood is Black at Night is an unrelenting take on war, race, masculinity, and colonialism. Most of all, Diop’s short, sharp, and serrated novel is a visceral dramatization of how our humanity and inhumanity are forever intertwined." ―Viet Thanh Nguyen, Pulitzer Prize winner and author of The Sympathizer

"David Diop's At Night All Blood Is Black is a particularly pertinent reflection on the evils of war, as well as a profound exploration of the human soul." ―J.M.G. Le Clézio, winner of the Nobel Prize in Literature

"This novel is a wonder. Written in a simple, almost naive, yet astonishing style, it speaks of the tragedy of the trenches with a moving delicacy. This is no war novel, but a book on what Montaigne called 'the solder of brotherhood.'" ―Tahar Ben Jelloun, Le Point

"David Diop here erects a beautiful monument to the Senegalese riflemen, and seeks to restore their African dimension; to listen to them, to understand them." ―Mathias Énard, Le Monde

David Diop was born in Paris and was raised in Senegal. He is the head of the Arts, Languages, and Literature Department at the University of Pau, where his research includes such topics as eighteenth-century French literature and European representations of Africa in the seventeenth and eighteenth centuries. His second novel, At Night All Blood Is Black, was awarded the International Booker Prize and the Los Angeles Times Book Prize for fiction.

By Night in Chile