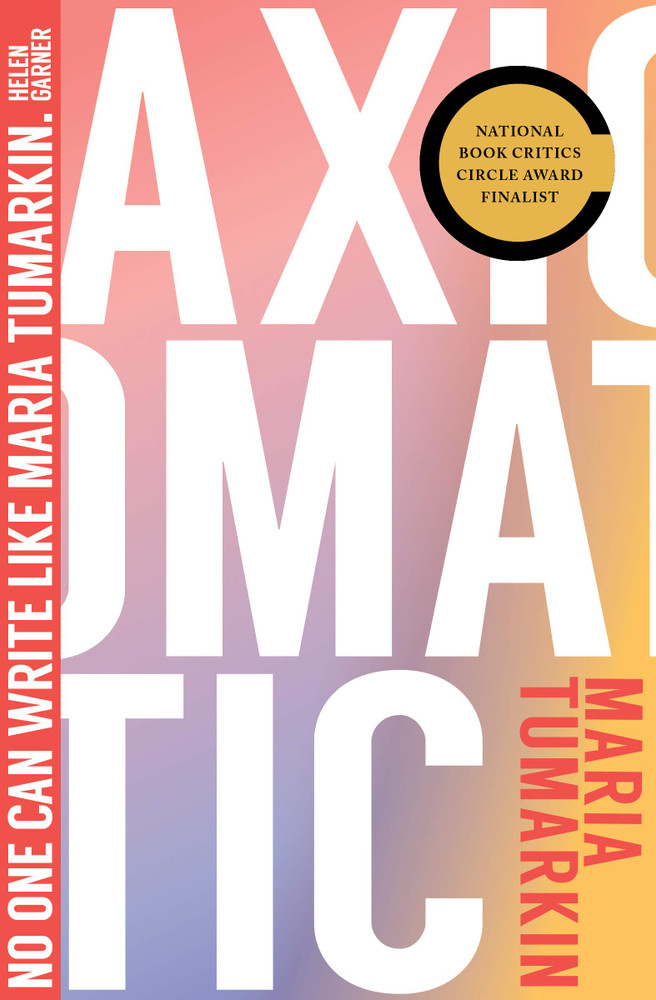 Drawing on nine years of research, Axiomatic explores the ways we understand the traumas we inherit and the systems that sustain them. In five sections—each one built on an axiom about how the past affects the present—Tumarkin weaves together true and intimate stories of a community dealing with the extended aftermath of a suicide, a grandmother’s quest to kidnap her grandson to keep him safe, one community lawyer’s struggle inside and against the criminal justice system, a larger-than-life Holocaust survivor, and the history of the author’s longest friendship.

With verve, wit, and critical dexterity, Tumarkin asks questions about loss, grief, and how our particular histories inform the people we become in the world. Axiomatic introduces an unforgettable voice.

"Restless, gorgeous essays, each of which uses an aphorism . . . to reflect on Tumarkin’s preoccupations: trauma, the ongoingness of the past, and the unworkability of language."—The New Yorker

"The work of a virtuoso . . . Like Maggie Nelson’s, Tumarkin’s is the kind of writing that makes much creative nonfiction seem clumsy and rudimentary, as if everyone else is writing way too many words about smaller, pettier ideas."—The Believer

"The reader’s equivalent of catching lightning in a bottle, Axiomatic showcases a brilliant and perceptive mind . . . Full of grace and insight, it is an exceptional book."—Foreword Reviews (Starred Review)

“Nobody can write like Maria Tumarkin: she charges headlong into the worst and best of us, with an iron refusal to soften or decorate; sentences bare of artifice, stripped back to the bone, to the nerve; fired by raging grief and love.”—Helen Garner, author of The Children's Bach

“Maria Tumarkin’s shape-shifting Axiomatic deploys all the resources of narrative, reportage and essay. It is a work of great power and beauty.”—Pankaj Mishra, The Guardian

“Everyone is looking for the next Helen Garner and Maria Tumarkin shares with Garner a gimlet eye for the flaws in official systems, along with a fascination for the narratives nested in everyday lives. Axiomatic’s symphonic structure, however, recalls Svetlana Alexievich, the Belarusian journalist and Nobel Laureate. She is another for whom reality attracts like a magnet, who has made a career out of appropriating and braiding voices and documents, seeing the world as a chorus and a collage. With this remarkable, wild, risk-laden book, Tumarkin has earned the right to be mentioned in the same breath as both of them.”—The Saturday Paper

“A brilliant kaleidoscope of arresting observations on suffering and innocence in modern times, Axiomatic is by turns illuminating, infuriating, engrossing and even amusing. I feel ambushed.”—Robert Dessaix

“As a writer she pushes at the edges, and then pushes further; she wants to shout, and sometimes she does. Axiomatic is a bracing ride. At its heart is the big question of the past and its traumas. How do they play out? Where does trauma begin? In history? Genes? Family? Society? Is comfort to be found in the familiar truisms we’re so quick to roll out?”—Inside Story

“Axiomatic is a series of open-ended essays about different people, as well as Tumarkin’s own intense experiences of love and friendship. Consoling pieties do not interest her. There is no resolution, no comfort. It is a bleak view of the world, but for many people, including Tumarkin’s friend Vera, 'That’s how it goes.' This happened. That happened. I am here. You are here. Lucky for us Tumarkin is here, too. Trying.”—The Monthly

“Again and again in Axiomatic, Tumarkin confronts the meagreness of the written word in the face of trauma as she muses on her inability to write the text she had intended ("I was working on this book and a year passed, then two, and two more …"). Yet again and again, she herself demonstrates what literary prose can do.”—Sydney Morning Herald

“There is a convention, towards the end of a review, to compare the writer with their peers, contemporary or long gone, to situate them in a continuum, to give a curious reader an idea of what they would expect. But to compare this work to anything on the shelves would be a disservice and, besides, the sheer breathtaking ambition of it has humbled and shamed me out of it. ... With Axiomatic, Tumarkin is simply operating on a higher level to the rest of us.”—The Australian

Maria Tumarkin is a writer and cultural historian. A recipient of the Windham-Campbell Prize, she is the author of three previous books of ideas, Traumascapes, Courage, and Otherland, all of which received critical acclaim in Australia, where she lives. Her most recent work, Axiomatic, was a finalist for the National Book Critics Circle Award.