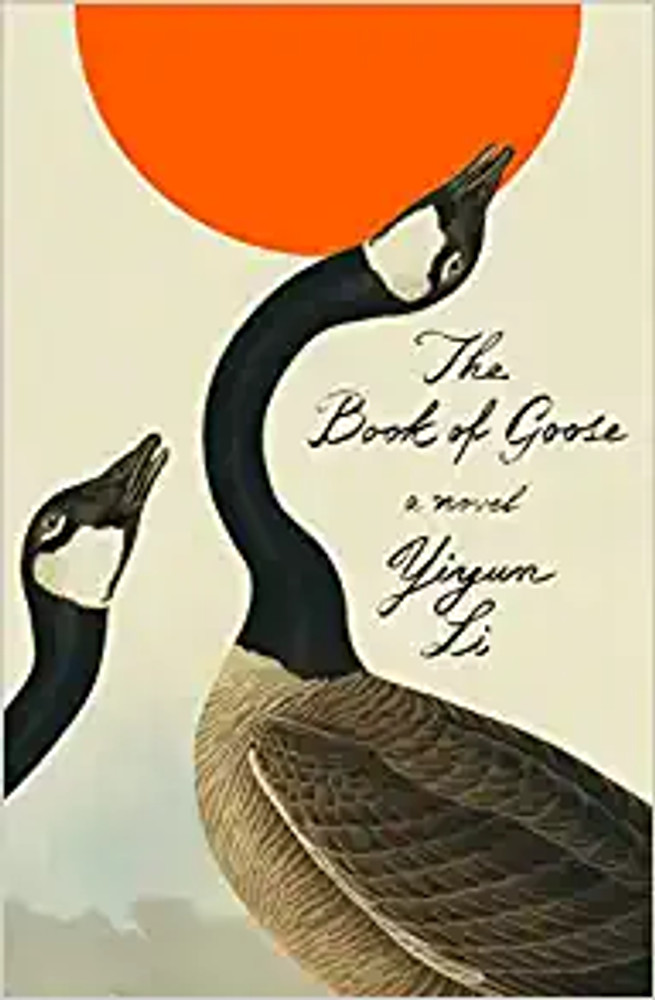 A magnificent, beguiling tale winding from the postwar rural provinces to Paris, from an English boarding school to the quiet Pennsylvania home where a woman can live without her past, The Book of Goose is a story of disturbing intimacy and obsession, of exploitation and strength of will, by the celebrated author Yiyun Li.

Fabienne is dead. Her childhood best friend, Agnès, receives the news in America, far from the French countryside where the two girls were raised―the place that Fabienne helped Agnès escape ten years ago. Now Agnès is free to tell her story.

As children in a war-ravaged backwater town, they’d built a private world, invisible to everyone but themselves―until Fabienne hatched the plan that would change everything, launching Agnès on an epic trajectory through fame, fortune, and terrible loss.

“Take the knife that Li offers, cut through all these outer trappings, and you find something much more mysterious. Though it is ostensibly a realist historical novel about the lives of women and girls in mid-century France...The Book of Goose secretly dwells in the realm of fairy tale . . . [Li explores] the strange power of the myths we form about the people who shape us.”
―Sarah Chihaya, The Atlantic

“There is a fairy-tale atmosphere, mystery as deep and dark as the soil, but also specific historical context . . . Everything is conveyed through layers of translation, subjectivity and invention. The impact is profound.”
―Max Liu, The i Paper

“A novel of meticulous philosophical inquiry, roaming from the nature of reality and the truth quotient of fact, memory and fiction to the instantaneousness of childhood friendship – so much more ‘fatal’, as Agnès puts it, than the endlessly crooned about love at first sight.”
―Hephzibah Anderson, The Guardian

“This is a novel of deceptions and cruelty . . . But within this somber mood is something brilliant. With characteristic poise, Li depicts the intricacies of ordinary lives: childhood friendship, growing up, and existences as slow as the passively ‘floating’ geese Agnès watches.”
―Francesca Peacock, The Spectator

“Li’s books render the world so sharply that they might draw blood, but they are also shot through, I think, with an extraordinary hopefulness . . . they possess a fullness, a deep love of both language and character.”
―Lynn Steger Strong, The Los Angeles Times

“A compulsively readable meditation on how our closest friendships harbor both love and hate―and how we can fail each other over and over again . . . Li’s crystalline, insightful prose adds incredible depth to the drama, yet the dynamic between the girls remains the complex heart of The Book of Goose.”
―Sarah Rose Etter, BOMB

“Not since John Knowles' A Separate Peace has a novel wrung such drama from two teens standing face to face on a tree branch.”
―Kevin Canfield, Star Tribune

"Li, of course, has never been the kind of writer who tells you what you want to hear, and this is surely part of why she has become, while still in her 40s, one of our finest living authors: Her elegant metaphysics never elide the blood and maggots."
―Megan O’Grady, The New York Times

“Li narrates from the fringes of her own experience, subverting the notion that a writer should be bounded by her own identity, that identity is both personal property and territory to be defended. She insists on her own uncategorizable perspective, breaking rules in a sly, stubborn way."
―Alexandra Kleeman, The New York Times Magazine

“Come for the writerly scheming, stay for the exquisitely calibrated examination of how our most tender and important bonds involve the manipulation of power and devotion.”
―Bethanne Patrick, The Los Angeles Times (most anticipated)

"Yiyun Li’s extraordinary new novel is a multivalent exploration of friendship and love, experience and exploitation, fate and futility, the slippage between reality and artifice . . . brilliant.”
―Carolyn Oliver, On the Seawall

“Exquisite . . . Knives, minerals, oranges, and the game of Rock Paper Scissors sneak into Agnès’ narrative as she relates the trajectory of a once-unbreakable union. The relative hardness of those substances is a clue to understanding it all. Stunners: Li’s memorable duo, their lives, their losses.”
―Kirkus Reviews (starred review)

“Not since Elena Ferrante’s My Brilliant Friend has a novel so deftly probed the magical and sometimes destructive friendships that can occur between two girls . . . The Book of Goose is an elegant and disturbing novel about exploitation and acquiescence, notoriety and obscurity, and whether you choose your life or are chosen by it.”
―Lauren Bufford, BookPage (starred review)

Yiyun Li is the author of several works of fiction―Must I Go, Where Reasons End, Kinder Than Solitude, A Thousand Years of Good Prayers, The Vagrants, and Gold Boy, Emerald Girl―and the memoir Dear Friend, from My Life I Write to You in Your Life. She is the recipient of many awards, including the PEN/Malamud Award, the PEN/Hemingway Award, the PEN/Jean Stein Book Award, a MacArthur Fellowship, and a Windham-Campbell Prize. Her work has also appeared in The New Yorker, A Public Space, The Best American Short Stories, and The PEN/O. Henry Prize Stories, among other publications. She teaches at Princeton University.