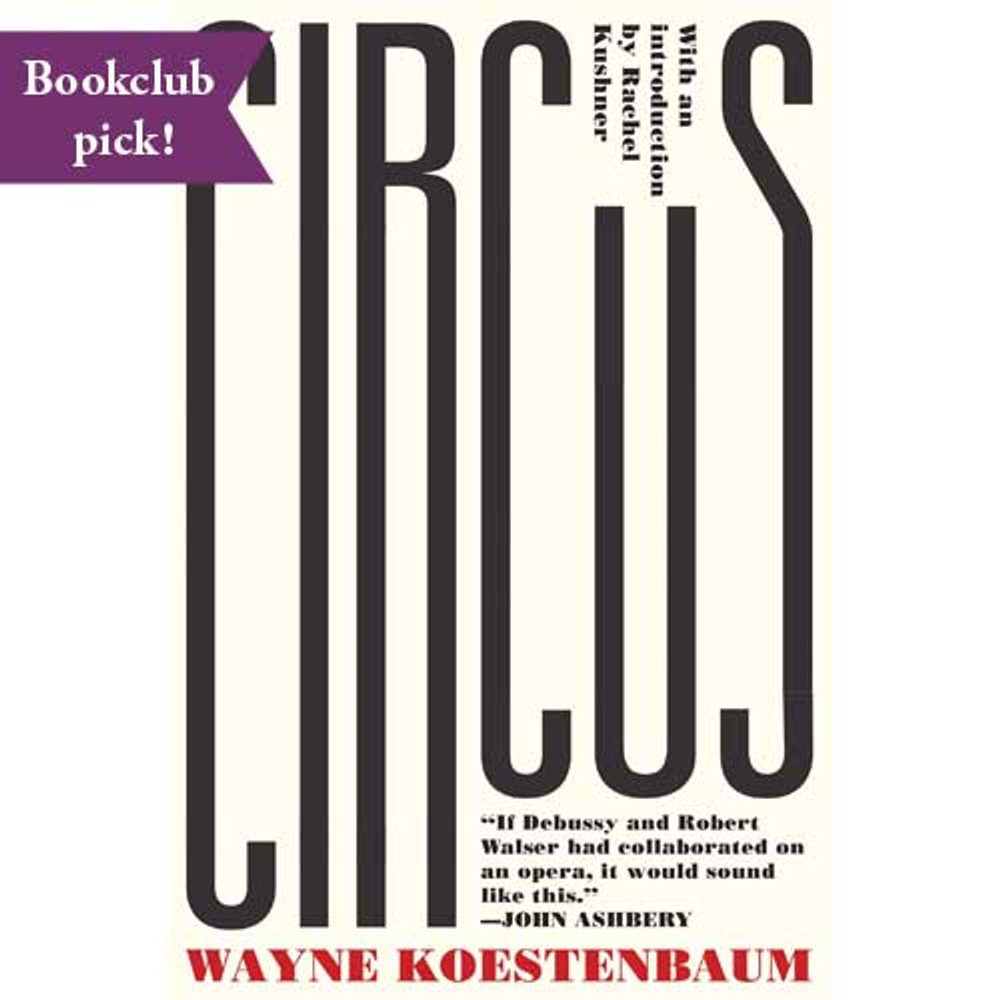 Circus: Or, Moira Orfei in Aigues-Mortes: A Novel

This title is the January 2020 pick for the UNICORN BOOKCLUB! Find out more here.

For five years, concert pianist Theo Mangrove has been living at his family’s home in East Kill, New York, recovering from a nervous breakdown that derailed his career, and attempting to relieve his relentless polysexual appetite in the company of male hustlers, random strangers, music students, his aunt, and occasionally his wife. As he prepares for a comeback recital in Aigues-Mortes, a walled medieval town in southern France, he becomes obsessed with the idea that the Italian circus star Moira Orfei must join him there to perform alongside him. Extravagantly (and tragicomically) describing his hallucinatory plans in a series of twenty-five notebooks, he assembles an incantatory meditation on performance, failure, fame, decay, and delusion. A new edition of a “dazzlingly seductive” fever dream written in “brilliant poetic vernacular” (Bookforum) by a beloved poet and cultural critic, now with an introduction by Rachel Kushner.

NYLON, 1 of 9 Great New Books to Read This Month

"This Soft Skull reissue of Wayne Koestenbaum's 2004 debut novel (now with an introduction by Rachel Kushner!) is the perfect book for summer: It's fever-hot, lurid to the extreme, and filled with the kind of lunatic linguistic acrobatics that leave you gasping for air." ―Kristin Iverson, Nylon, 1 of 35 Great Books to Read This Summer

"[Koestenbaum] rarely writes fiction, but when he does, it is exquisitely unhinged, a little more so than the rest of his more typically aphoristic prose . . . Narrative continuity and formal completion aren’t exactly his bedfellows, which is why Circus, a novel, stands out among the rest of his oeuvre . . . Composed as a series of notebooks authored by the narrator, Circus logs the highs and lows of Theo Mangrove’s small-town life and histrionic musical aspirations. His accounts are detailed, raw, and sexually explicit; as Theo’s HIV positive body gradually deteriorates, he ruminates obsessively over a classical repertoire that he may or may not perform." ––Mirene Arsanios, Guernica

"Koestenbaum’s hallucinatory lyricism lends itself to declaration like 'After an intense orgasm we produce voice from our head rather than our chest;' an aphorism every-bit worthy of poet John Shade in Vladimir Nabokov’s Pale Fire." ―The Millions, Most Anticipated

"You probably know Wayne Koestenbaum for his incisive nonfiction or his surreal poetry, but that’s not all he’s done. This new edition of Circus: Or, Moira Orfei in Aigues-Mortes: A Novel brings his novel back into print, complete with introduction by Rachel Kushner. It’s about a reclusive pianist planning his comeback in the most surreal manner possible―a welcome reminder of Koestenbaum’s breadth as an author." ––Vol. 1 Brooklyn

"Poet, writer, and otherwise diversely talented cultural mainstay Wayne Koestenbaum does not shy away from anything, and we are all the better for it . . . His novel Circus, which was originally published in 2004, was re-released this year by Soft Skull Press . . . Koestenbaum guides us through the most uncomfortable of subjects with his renowned humor and inventiveness of language, and the brilliant Rachel Kushner provides the introduction to the new edition." ––Ruby Bruntun, BOMB

"Wayne Koestenbaum’s poetry is as well revered as his cult-classic work of cultural criticism The Queen’s Throat: Opera, Homosexuality, and the Mystery of Desire. But his novels are the place to find his brilliant mind on fire in a prose style that is as challenging as it is uproarious. His recently reissued novel, Circus: or, Moira Orfei in Aigues-Mortes, is a rich treat of incantatory prose focusing on fame, decadence, classical music and an Italian circus star." ––Ira Silverberg, Document

Wayne Koestenbaum is a poet, critic, and artist. His books include The Queen’s Throat: Opera, Homosexuality, and the Mystery of Desire, a National Book Critics Circle Award finalist; Jackie Under My Skin: Interpreting an Icon; My 1980s and Other Essays; Humiliation; Hotel Theory; The Pink Trance Notebooks; and Camp Marmalade. He lives in New York City, where he is a Distinguished Professor of English at the CUNY Graduate Center.

Marvellous Equations of the Dread: A Novel in Bass Riddim