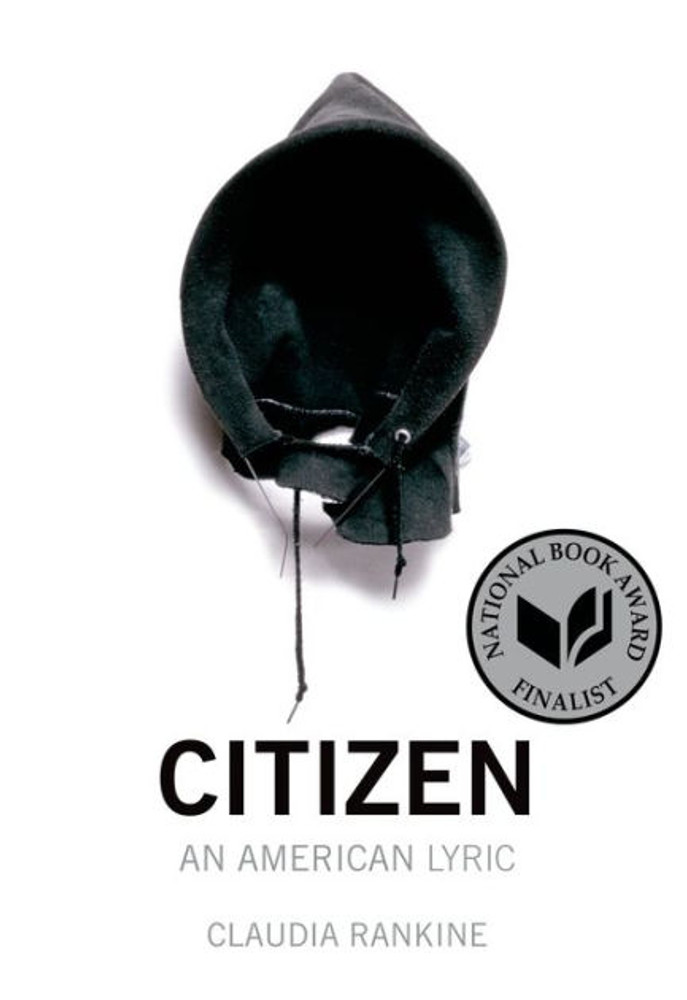 ONE OF THE BEST BOOKS OF THE YEAR:
The New Yorker, Boston Globe, The Atlantic, BuzzFeed, NPR. Los Angeles Times, Publishers Weekly, Slate, Time Out New York, Vulture, Refinery 29, and many more . . .

A provocative meditation on race, Claudia Rankine's long-awaited follow up to her groundbreaking book Don't Let Me Be Lonely: An American Lyric.

Claudia Rankine's bold new book recounts mounting racial aggressions in ongoing encounters in twenty-first-century daily life and in the media. Some of these encounters are slights, seeming slips of the tongue, and some are intentional offensives in the classroom, at the supermarket, at home, on the tennis court with Serena Williams and the soccer field with Zinedine Zidane, online, on TV-everywhere, all the time. The accumulative stresses come to bear on a person's ability to speak, perform, and stay alive. Our addressability is tied to the state of our belonging, Rankine argues, as are our assumptions and expectations of citizenship. In essay, image, and poetry, Citizen is a powerful testament to the individual and collective effects of racism in our contemporary, often named "post-race" society.

“[Citizen] is an especially vital book for this moment in time. . . . The realization at the end of this book sits heavily upon the heart: 'This is how you are a citizen,' Rankine writes. 'Come on. Let it go. Move on.' As Rankine's brilliant, disabusing work, always aware of its ironies, reminds us, 'moving on' is not synonymous with 'leaving behind.'” ―The New Yorker

“Citizen is audacious in form. But what is perhaps especially striking about the book is that it has achieved something that eludes much modern poetry: urgency.” ―The New York Times

“So groundbreaking is Rankine's work that it's almost impossible to describe; suffice it to say that this is a poem that reads like an essay (or the other way around) - a piece of writing that invents a new form for itself, incorporating pictures, slogans, social commentary and the most piercing and affecting revelations to evoke the intersection of inner and outer life.” ―Los Angeles Times

“Rankine brilliantly pushes poetry's forms to disarm readers and circumvent our carefully constructed defense mechanisms against the hint of possibly being racist ourselves. . . . Citizen throws a Molotov cocktail at the notion that reduction of injustice is the same as freedom.” ―The New York Times Book Review

“The book of the year is Claudia Rankine's Citizen. It would have been the book of any year.... Citizen asks us to change the way we look; we have to believe that that might lead to changing the way we live.” ―The New Yorker’s Page-Turner

“[Citizen] is one of the best books I've ever wanted not to read. . . . Its genius . . . resides in that capacity to make so many different versions of American life proper to itself, to instruct us in the depth and variety of our participation in a narrative of race that we recount and reinstate, even when we speak as though it weren't there.” ―Slate

“Marrying prose, poetry, and the visual image, Citizen investigates the ways in which racism pervades daily American social and cultural life, rendering certain of its citizens politically invisible. Rankine's formally inventive book challenges our notion that citizenship is only a legal designation that the state determines by expanding that definition to include a larger understanding of civic belonging and identity, built out of cross-racial empathy, communal responsibility, and a deeply shared commitment to equality.” ―National Book Award Judges’ Citation

“Citizen is an anatomy of American racism in the new millennium, a slender, musical book that arrives with the force of a thunderclap. . . . This work is careful, loving, restorative witness is itself an act of resistance, a proof of endurance.” ―Bookforum

“Accounts of racially charged interactions, insidious and flagrant, transpiring in private and in the public eye, distill the immediate emotional intensity of individual experience with tremendous precision while allowing ambiguity, ambivalence, contradiction, and exhaustion to remain in all their fraught complexity. . . . Once again Rankine inspires sympathy and outrage, but most of all a will to take a deep look at ourselves and our society.” ―Publishers Weekly, starred review

“Claudia Rankine's Citizen comes at you like doom. It's the best note in the wrong song that is America. Its various realities--'mistaken' identity, social racism, the whole fabric of urban and suburban life--are almost too much to bear, but you bear them, because it's the truth. Citizen is Rankine's Spoon River Anthology, an epic as large and frightening and beautiful as the country and various emotional states that produced it.” ―Hilton Als

Claudia Rankine is the author of four previous books, including Don't Let Me Be Lonely: An American Lyric. She currently is a chancellor of the Academy of American Poets and teaches at Pomona College.