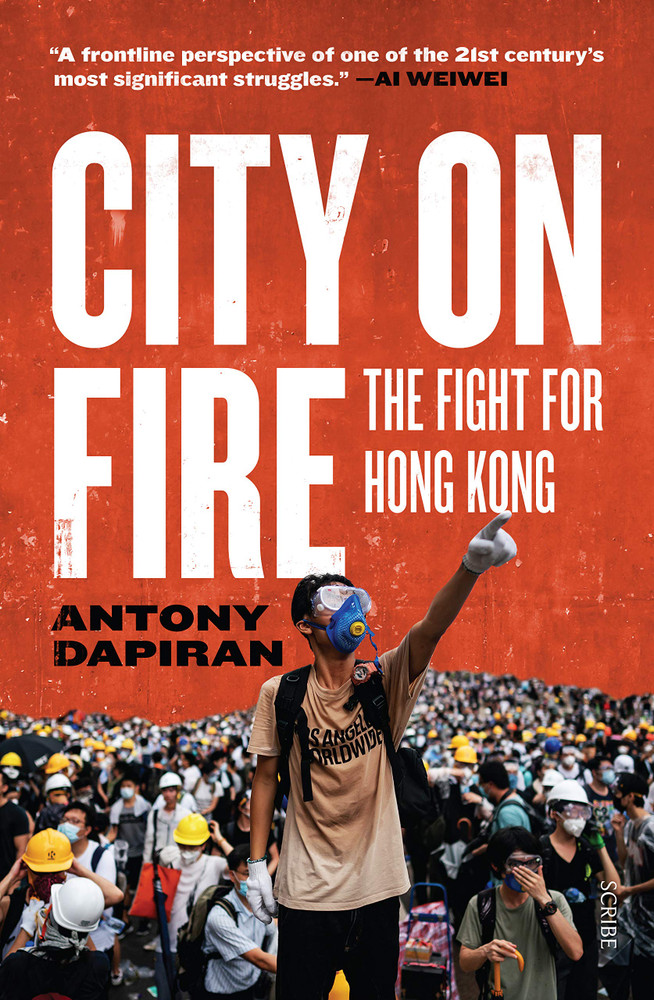 City on Fire: The Fight for Hong Kong

A long-term resident and expert observer of dissent in Hong Kong takes readers to the frontlines of Hong Kong’s revolution.

Through the long, hot summer of 2019, Hong Kong burned. Anti-government protests, sparked by a government proposal to introduce a controversial extradition law, grew into a pro-democracy movement that engulfed the city for months. Protesters fought street battles with police, and the unrest brought the People’s Liberation Army to the doorstep of Hong Kong. Driven primarily by youth protesters with their ‘Be water!’ philosophy, borrowed from hometown hero Bruce Lee, this leaderless, technology-driven protest movement defied a global superpower and changed Hong Kong, perhaps forever.

In City on Fire, Antony Dapiran provides the first detailed analysis of the protests, and reveals the protesters’ unique tactics. He explains how the movement fits into the city’s long history of dissent, examines the cultural aspects of the movement, and looks at what the protests will mean for the future of Hong Kong, China, and China’s place in the world.

City on Fire will be seen as the definitive account of an historic upheaval.

“Illuminates every phase, trigger and turning point, skirmish and tactic in what became “a fight for the very soul of the city”.”
―South China Morning Post

“It gives a sense of immediacy and lived experience which is powerful and compelling; there is a rawness to passages of the book, and a sense of the unresolved trauma that last summer marked.”
―Asian Review of Books

“In smooth, heady prose that blends legal scholarship with the romanticism of a battle for independence, Dapiran shows…a city unhinged, on the verge of breakdown.”
―Japan Times

“Dapiran shows how the protests brought worldwide attention to Hong Kong and civil liberties in an autonomous region. Readers will appreciate how the author places the events of 2019 in the context of earlier episodes in Hong Kong’s history such as the 2014 Umbrella Movement and the 1967 riots. This fascinating read is essential for anyone interested in the current affairs of Hong Kong, specifically, and China, generally.” STARRED REVIEW
―Library Journal

“Readers interested in Hong Kong's history and politics and the history of social movements will find this engaging, engrossing book to be crucial in understanding the role of political demonstration in contemporary Hong Kong.”
―Booklist

“The events that have rocked Hong Kong over 2019 have bewildered and surprised people inside and outside the city. This is a timely, well-informed attempt to make sense of everything that has happened―critically important in view of the confusion, and contention, that this event has caused.”
―Professor Kerry Brown, Director, Lau China Institute, King’s College London

“City on Fire by Antony Dapiran, a lawyer and writer, offers a firsthand analysis and description of one of the 21st century's most significant struggles. China's authoritarian interference in Hong Kong was met by a unique and unprecedented popular uprising. This book provides a clear narrative and frontline perspective of a complex issue. It is the most comprehensive book about the Hong Kong protests from a professional observer.”
―Ai Weiwei

“[A] gifted writer who tells a compelling story of what the protesters have been up against, what they are fighting for, and how their tactics and goals have evolved over time… This is the definitive account of China’s biggest political crisis since Tiananmen.”
―National Review

“[A] nuanced, lively eyewitness account of the 2019 protest surge in Hong Kong that garnered so many headlines around the world.”
―Los Angeles Review of Books

“City on Fire is Dapiran's follow-up to his earlier book about the Umbrella Movement in 2014. The much-longer sequel is deeply personal, based on riveting first-hand accounts and historical insights on the turmoil that erupted last summer. It is helpful that Dapiran, who is impressively versed in the nuances of Hong Kong's local dialect and culture, was present at both watershed moments.”
―ReutersBreakingViews

“Antony Dapiran’s City on Fire combines relentless on-the-ground reporting with a deep understanding of the city’s political, economic and social undercurrents…Dapiran’s style is energetic and vivid, transporting the reader to the middle of a riot police baton charge or a panicked, tear-gassed crowd capturing the broad community support and new-found solidarity of the movement in a city that had a reputation for being cold and distant.”
―Sue-Lin Wong, Financial Times

A long-time resident of Hong Kong, Antony Dapiran has written about the protests for The Atlantic, The Guardian, and New Statesman, has been interviewed on the subject by CNN, CNBC, CBC, and the BBC, and his expert views have been quoted by leading media outlets across the globe, including The Wall Street Journal, The New York Times, The Washington Post, and the Financial Times.