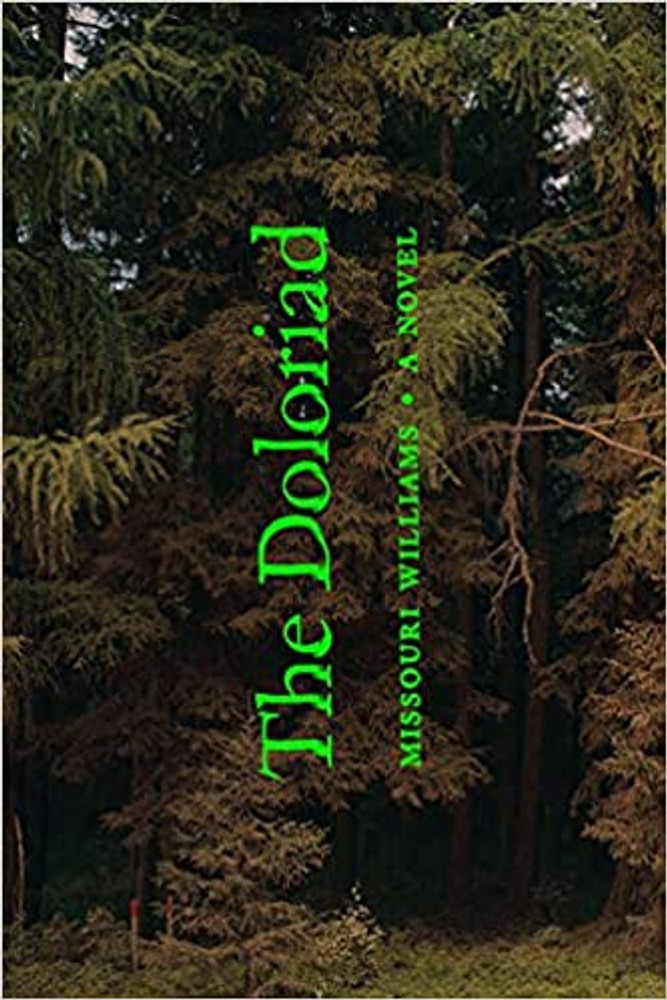 "[The Doloriad] just might be what your rotten little heart deserves." ―J. Robert Lennon, The New York Times Book Review

One of Vulture's Best Books of 2022 (So Far). Named a Most Anticipated Book of 2022 by i-D, Cosmopolitan,Thrillist, Lit Reactor, and Lit Hub, and one of Nylon's March 2022 Books to Add to Your Reading List

In the wake of a mysterious environmental cataclysm that has wiped out the rest of humankind, the Matriarch, her brother, and the family descended from their incest cling to existence on the edges of a deserted city. The Matriarch, ruling with fear and force, dreams of starting humanity over again, though her children are not so certain. Together the family scavenges supplies and attempts to cultivate the poisoned earth. For entertainment, they watch old VHS tapes of a TV show in which a problem-solving medieval saint faces down a sequence of logical and ethical dilemmas. But one day the Matriarch dreams of another group of survivors and sends away one of her daughters, the legless Dolores, as a marriage offering. When Dolores returns the next day, her reappearance triggers the breakdown of the Matriarch’s fragile order, and the control she wields over their sprawling family begins to weaken.

Told in extraordinary, intricate prose that moves with a life of its own, and at times striking with the power of physical force, Missouri Williams’s debut novel is a blazingly original document of depravity and salvation. Gothic and strange, moving and disquieting, and often hilarious, The Doloriad stares down, with narrowed eyes, humanity’s unbreakable commitment to life.

"An apocalypse narrative of biblical proportions . . . In gorgeous, painful language that evanesces between the perspectives of the novel’s main characters, Williams’s novel boldly engages philosophical and theological questions about humanity’s will to live and right to survive and offers a shimmering glimpse of a world beyond our own." ―Nolan Kelly, Bookforum

" Williams’s book bears resemblances to William Faulkner in its conceit, in its wending sentences, and in its images . . . what could be more Gothic, more suffocating and cloistered, than an apocalypse that left behind only you and your most overbearing family members? ― Maddie Crum, Vulture

"A striking dystopian debut . . . The tension between old and new ways of being unfolds like a kind of gothic Greek tragedy. The prose brilliantly suggests its world, full of sucking mud and tumbledown ruins: it is repellent but also sumptuous, shifting thickly through its main characters’ perspectives to create a dreamlike yet materially vivid world." ―Jessie Lethaby, The Sunday Times (UK)

"A brilliant, unsettling, gothic take on a Greek tragedy." ―i-D

"An almost grotesque superabundance of style, sentences that sprawl and swell along with [Williams's] characters . . . until you, the reader, can’t take it anymore, the turgidity of both form and forms, and so give up halfway through, throw the book away, and run screaming into the sanity of sunshine, away from the hebetude and decrepitude of indulgence, of too much―yet never enough―disgusting life." ―Jason Kehe, WIRED

"Stick with The Doloriad and you may appreciate the delicate sentences that detail its indelicate ideas, and its darkly comic ambience. This is Missouri Williams’ first novel and I will follow her anywhere, reading through my fingers, grinning through gritted teeth." ―Patrick Rapa, The Philadelphia Inquirer

"Williams is an intelligent stylist, deftly unfolding energetic prose reliant on her powerfully strange imagery . . . By the end of THE DOLORIAD, I was left not so much with the feeling of exhaustion you might expect from such a heavy work, but with one of awe. The creation may be dark, but the time spent in Williams’s Eremocene is exhilarating, if lonely." ―Shane Jones, The White Review

"A macabre epic that interrogates the shadow cast by a family's unyielding desire to persist. Maximal and thoroughly bizarre, The Doloriad marks Williams as a new voice that demands attention." ―Nathan Stormer, TriQuarterly

"Missouri Williams writes with winding, weighty prose, as the novel’s sentences anchor themselves to these depraved human souls. A strong stomach – and stronger heart – may be required for The Doloriad’s world, but living amongst the cruelty, the disgust and the despair is a formidable novel about the ancient beauty of just staying alive." ―Katie Goh, The Skinny

"The Doloriad is a perverse tale of human remnants scratching out a bare survival like a lone pine twisting out of a stony cliff . . . [The Doloriad is] evidence that an excellent new writer has emerged, one with a strong voice, one who is a confident crafter of deep and beautiful language that gives birth to vivid characters and sense of place." ―R.P. Finch, PopMatters

"This one’s different, honestly. This is postapocalyptica via Kafka, Švankmajer, and the Brothers Grimm . . . I had to stop and come up for air several times." ―CD Rose, 3AM Magazine

"A wild and wholly original contribution to the growing genre of climate fiction . . . Like certain ancient texts, The Doloriad seeks to capture the universals of human experience, our essence and our drives." ―Daisy Sainsbury, Literary Review (UK)

"Williams’ prose is dense and lavish, her characterisation is disquieting and her environmental descriptions offbeat, but razor-sharp . . . The reading experience is like lifting a stone to see a writhing colony of worms beneath." ―Lunate (UK)

"[A] grim and strange, but utterly unique, literary and gothic debut . . . This is a gripping look at humanity’s treatment of women and questions whether human survival at all costs is worth it.” ―Booklist

"Williams’s disquieting survival novel is meant to evoke a visceral, uncomfortable reaction in readers, enhanced by the eerily detached omniscient narration that reveals intimate and depraved details . . . this odd, deeply unsettling story will have readers vacillating between overwhelming disgust and an inability to stop thinking about what it all means." --Library Journal

"Williams compiles her images in breathless, smothering drifts that mimic both the oppressive landscape and the gauzy unreliability of the main characters’ perceptions with virtuosic intensity . . . Williams’ linguistic project is akin to the early work of Cormac McCarthy." ―Kirkus

"Unlike anything I've ever read. The Doloriad is―somehow―Old Testament origin story, Shakespearean family feud, Greek epic, philosophical parable, and absurdist sitcom, all in one. Horrible and riveting, I could not look away." ―Jac Jemc, author of The Grip of It and False Bingo

"Not since Katherine Dunn's Geek Love have I encountered a family dynamic that's as disturbingly gonzo and mesmerizing as the one portrayed in The Doloriad. Set against an ethereally ravaged post-apocalyptic landscape, this is a novel that yet very viscerally reveals how primal jealousy and cruelty distort not only who we are but who we may become for generations. Missouri Williams is a formidably talented writer, whose dark prognostications are both thrilling and frightening to behold." ―Mary South, author of You Will Never Be Forgotten

"The Doloriad comes in hot like a blazing comet from a distant universe: wholly unexpected, shocking, brilliant. In vivid, crystalline, and often hallucinatory prose, Missouri Williams offers an unsettling vision of a future-past world where entropy has disintegrated civilization as we know it and yet life pushes on. Although it is shot through with horror, this is not your typical dystopia -- it is far weirder than that. With references ranging from ancient Greek poetry to Netflix-era dramedy, the story that emerges is at once extremely disturbing and compulsively readable." ―Elvia Wilk, author of Oval

Missouri Williams is a writer and editor who lives in London. Her work has appeared in The Nation, The Baffler, The Believer, Granta, and Five Dials. The Doloriad is her first book.