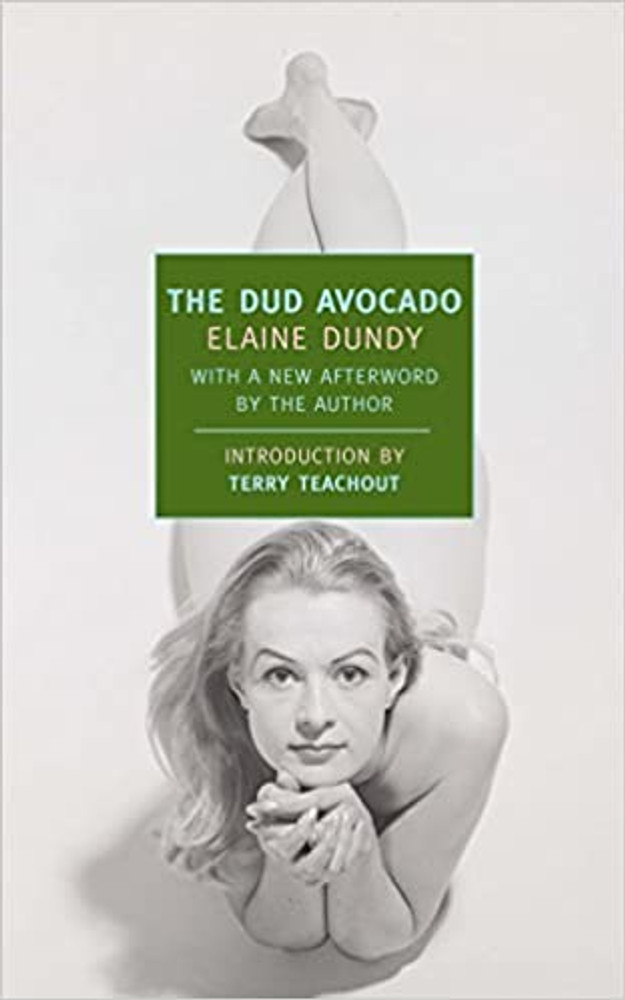 A smart, funny classic about a young and beautiful American woman who moves to Paris determined to live life to the fullest.

The Dud Avocado follows the romantic and comedic adventures of a young American who heads overseas to conquer Paris in the late 1950s. Edith Wharton and Henry James wrote about the American girl abroad, but it was Elaine Dundy’s Sally Jay Gorce who told us what she was really thinking. Charming, sexy, and hilarious, The Dud Avocado gained instant cult status when it was first published and it remains a timeless portrait of a woman hell-bent on living.

“I had to tell someone how much I enjoyed The Dud Avocado. It made me laugh, scream, and guffaw (which, incidentally, is a great name for a law firm).” –Groucho Marx

"[The Dud Avocado] is one of the best novels about growing up fast..." -The Guardian

“Basically, if you were to set Henry James’ Portrait of a Lady near the Sorbonne, untangle the sentences and add more slapstick, sex and champagne cocktails, you’re getting close.” - Rosecrans Baldwin, NPR's "All Things Considered"

"Already singled out in O the Oprah Magazine and named an Amazon.com 'mover and shaker,' this edition will...introduce a new readership to the unforgettable Sally Jay Gorce, described by one reviewer as a cross between Carrie Bradshaw and Holden Caulfield." --Los Angeles Times

"Think Daisy Miller with a dash of Fear of Flying; My Sister Eileen with a soupçon of Sex and the City; Anita Loos crossed with Allen Ginsberg." --The Philadelphia Inquirer

"Now, this favorite has been re-issued yet again, with a gorgeous black and white nude on the cover. Fair enough, for here is a book primarily about sex and style...few writers ever soared so high and so delightfully." --Los Angeles Times

"The Dud Avocado opens with our beautiful and hapless heroine--imagine the panache of Holly Golightly crossed with the naive knowingness of Holden Caulfield--wandering one September morning through Paris in an evening dress." --Boston Globe

"The gayest and most cheerful novel about Americans in Paris I have read...a dazzling performance--as light as a champagne bubble, as continuously attention-getting as a juggler keeping seven swords in the air at the same time." --The New York Times

"Take one zippy, curious, 21-year-old American named Sally Jay, just out of college. Drop her in the middle of Paris' Left Bank. Add an Italian diplomat, an American theatrical director , a couple of painters and a white slave trader. Mix until all bubbles. The result: a delightful few hours of sparkling reading entertainment. Summing up: Froth and frolic." --Newsweek

"A champagne cocktail...rich, invigorating, and deceptively simple to the taste...One falls for Sally Jay from a great height from the first sentence." --The Observer

"A first-rate reporter, [Dundy] has made The Dud Avocado into a Baedeker of neo-Bohemiahe...the atmosphere of a French student café; the folkways of hobohemia; the accents of the International Set-all these Miss Dundy has captured with sill and a degree of wit." --The New York Times Book Review

"A cheerfully uninhibited...variation on the theme of the Innocents Abroad...Miss Dundy comes up with fresh and spirited comedy...Her novel is enormous fun-sparklingly written, genuinely youthful in spirit, and exquisitely gay." --The Atlantic

"Elaine Dundy writes a sprightly novel to bring us up to date on the American girl from across the street who goes to Paris looking for Life and Love. Her book is sad and tender, bubbling with fun, spiced with insight...The Dud Avocado is satiric, mostly true, and decidedly sexy...The writing is sharp." --New York Herald Tribune

"[W]itticisms that crackle from every page." --Indianapolis Star

"One of the funniest books I've ever read; it should be subtitled Daisy Miller's Revenge." --Gore Vidal

"American goes to some big city with dreams of conquest, hilarity ensues. Dundy’s 1958 novel (which had a huge fan in Groucho Marx) is pretty much the best and funniest example of that whole genre." —Jason Diamond, Flavorwire

Elaine Dundy (1921—2008) was born in New York City, and lived in Paris and London. She was married for a time to theater critic Kenneth Tynan. She wrote plays, novels, and biographies, including Elvis and Gladys and Life Itself! Her work has appeared in The New York Times, Esquire, and Vogue among other publications. Her novel, The Dud Avocado, was re-published by NYRB Classics in 2007.

Terry Teachout is the drama critic for The Wall Street Journal and the critic-at-large for Commentary. He has written biographies of Louis Armstrong, George Balanchine, Duke Ellington, and H. L. Mencken; the libretti for three operas by Paul Moravec; and a play, Satchmo at the Waldorf, that has been produced off-Broadway and throughout America.