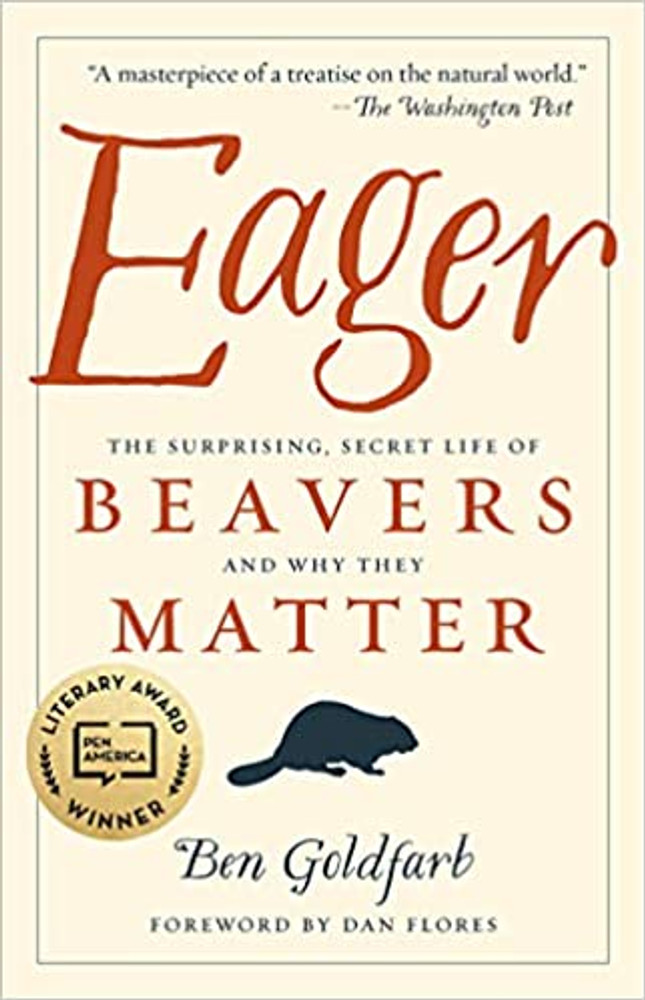 Eager: The Surprising, Secret Life of Beavers and Why They Matter

"A marvelously humor-laced page-turner about the science of semi-aquatic rodents…. A masterpiece of a treatise on the natural world.”―The Washington Post

In Eager, environmental journalist Ben Goldfarb reveals that our modern idea of what a healthy landscape looks like and how it functions is wrong, distorted by the fur trade that once trapped out millions of beavers from North America’s lakes and rivers. The consequences of losing beavers were profound: streams eroded, wetlands dried up, and species from salmon to swans lost vital habitat. Today, a growing coalition of “Beaver Believers”―including scientists, ranchers, and passionate citizens―recognizes that ecosystems with beavers are far healthier, for humans and non-humans alike, than those without them. From the Nevada deserts to the Scottish highlands, Believers are now hard at work restoring these industrious rodents to their former haunts. Eager is a powerful story about one of the world’s most influential species, how North America was colonized, how our landscapes have changed over the centuries, and how beavers can help us fight drought, flooding, wildfire, extinction, and the ravages of climate change. Ultimately, it’s about how we can learn to coexist, harmoniously and even beneficially, with our fellow travelers on this planet.

“Written with clarity, intelligence, and humor, this engaging book will appeal to basically everyone.”―Forbes

“Eager takes us inside the amazing world of nature’s premier construction engineer…and shows us why the restoration of an animal almost driven to extinction is producing wide-ranging, positive effects on our landscapes, ecology, and even our economy.”―National Geographic

"Impressively researched, charmingly written, absolutely persuasive book. . . .Goldfarb makes his argument with a quiet power and deceptively breezy writing that paints a vivid picture of how the various inhabitants of the natural world rely on one other. Take one vital piece out and the whole thing could collapse."―The Seattle Times

"This book lodges itself among the ranks of the best sort of environmental journalism.”―The Boston Globe

“Eager is a passionate, captivating love letter to the beaver.”―The Christian Science Monitor

"Engrossing and elegantly written…. Within its wide scope, Eager includes nuggets sure to make you the most fascinating conversationalist at your next party.”―Scientific American

“A revelation! If we only let them live, beavers are the solution to many of our nation’s ecological problems. . . . Goldfarb’s wonderful book might just tail-slap a politician or two into realizing how much we need them to restore our critical wetlands.”―Sy Montgomery, New York Times bestselling author of The Soul of an Octopus

“This witty, engrossing book will be a classic from the day it is published.”―Bill McKibben, author of The End of Nature

“European settlers who cut, plowed, and shot their way west also trapped the country nearly clean of mammals. . . . Now, though, beavers are on the rebound, and the how and who of that story, as told in Eager, will give you a new and completely different concept of the continent.”―Carl Safina, New York Times bestselling author of Beyond Words

Ben Goldfarb is an award-winning environmental journalist who covers wildlife conservation, marine science, and public lands management, as well as an accomplished fiction writer. His work has been featured in Science, Mother Jones, The Guardian, High Country News, VICE, Audubon Magazine, Modern Farmer, Orion, World Wildlife Magazine, Scientific American, Yale Environment 360, and many other publications. He holds a master of environmental management from the Yale School of Forestry and Environmental Studies and is a 2018 North American Congress for Conservation Biology journalist fellow.

How to Resist Amazon + Why