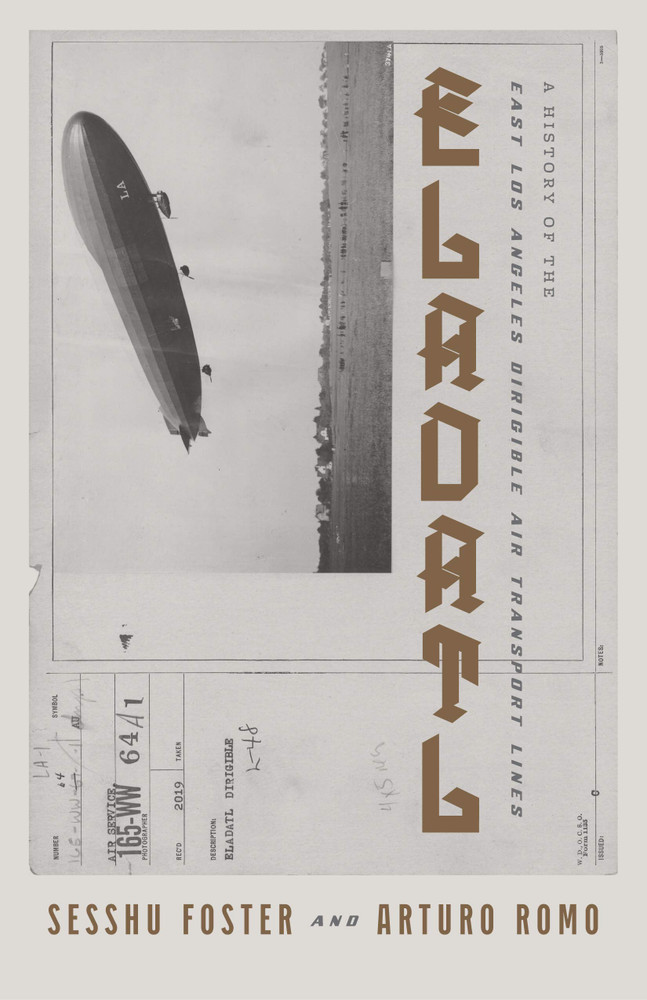 A breathtaking free fall into the long-buried (and fictional) history of a utopian era in American lighter-than-air travel, as told by its death-defying, aero-acrobatic heroes.

"Foster and Romo's 'real fake dream' of the future-past history of the East Los Angeles Dirigible Air Transport Lines is a superb and loving phantasmagoria that gobbles up real histories for breakfast and spits out the seeds."—Jonathan Lethem, author of Motherless Brooklyn

In the early years of the twentieth-century, the use of airships known as dirigibles—some as large as one thousand feet long—was being promulgated in Southern California by a semi-clandestine lighter-than-air movement. Groups like the East LA Balloon Club and the Bessie Coleman Aero Club were hard at work to revolutionize travel, with an aim to literally lift oppressed people out of racism and poverty.

ELADATL tells the story of this little-known period of American air travel in a series of overlapping narratives told by key figures, accompanied by a number of historic photographs and recently discovered artifacts, with appendices provided to fill in the missing links. The story of the rise and fall of this ill-fated airship movement investigates its long-buried history, replete with heroes, villains, and moments of astonishing derring-do and terrifying disaster.

Written and presented as an “actual history of a fictional company,” this surrealist, experimental novel is a tour de force of politicized fantastic fiction, a work of hybrid art-making distilled into a truly original literary form. Developed over a ten-year period of collaborations, community interventions, and staged performances, ELADATL is a furiously hilarious send-up of academic histories, mainstream narratives, and any traditional notions of the time-space continuum.

"Poet Foster (Atomik Aztex) and artist Romo deliver a maddeningly accomplished inquiry into the secret history of East Los Angeles. . . . This is as much fun to read as it must have been to make."—Publishers Weekly, Starred Review

"One of the wildest, most creative and deeply-cutting novels I’ve read in years, a genuine piece of newness in both content and form. To wade through this surreal narrative archeology is to experience, in the finest sense, literature as fever dream."—Omar El Akkad, author of American War: A Novel

"Hilarious and prophetic and profound, truer than truth, and realer than all realities currently available for purchase, ELADATL is strong medicine against the erasures of history, a mega-vitamin for struggles yet to come. This book combats despair."—Ben Ehrenreich, author of Desert Notebooks: A Road Map for the End of Time

"Climb onboard ELADATL for one wild trip of a read! ELADATL is a fictionalized account of the early days of air travel in LA told through words, art, and photographs. ELADATL has all the makings of a cult classic."—Cailtin Baker, Island Books, Mercer Island

"Like Burroughs's Naked Lunch, the premise of what ELADATL seems to be about in the first 50 pages, explodes into a collage of lists, 'agent reports,' photographs, notes, and narratives,—all more or less on the topic of the ELADATL from various viewpoints, times, and places. The energy level of the book is high as disparate voices describe eerie, suspenseful scenes, make comedic observations, and recount of historical crimes and atrocities. Recommended: experimental and accessible, briskly paced, with pointed humor throughout."—Tom Bowden, The Book Beat, Westland, MI

"I have never read a book quite like this one.  It exceeded every expectation I have developed in the 15-years since Sesshu Foster's previous novel, the Believer Book Award-winning masterpiece Atomik Aztex, was released. ELADATL is a work that is both about the past of Eastern Los Angeles and a novel that is of its future, a metaphor for the lifting up of a people, and also for the crashing and burning of expectations.  There are riots, pirate radio stations, militaristic chicken farms, and krakens, but at its heart, this is a novel about class, race, economic struggle and a yearning for transcendence. Along with Sesshu Foster's words and Arturo Romo's masterful artwork, the academia-mocking appendices lend ELADATL a vibe reminiscent of Walter Benjamin by way of Vladimir Nabokov.  I cannot wait to turn our customers onto this novel."—Jason Jefferies, Quail Ridge Bookstore, Raleigh, NC

"Sesshu Foster and Arturo Ernesto Romo's ELADATL: A History of the East Los Angeles Dirigible Air Transport Lines is a portfolio in prose and pictures that's 100% made up but that I nonetheless believe to be 100% true. It reads like a cross between Yamashita's I Hotel and Pynchon's The Crying of Lot 49, although saying so does ELADATL a disservice—it stands proudly on its own, a smile on its face and middle finger raised. If I don't see a young bookseller sporting an ELADATL tattoo within the next couple years, I'll be shocked."—James Crossley, Madison Books, Seattle, WA

"This novel not only explores the actual quest for physical elevation, but, more significantly, with the complication of inner elevation, attempting to rise above a circumstance studded with racism and looming financial debacle. Mr. Foster's novel magically inscribes the trenchant character of an opaque and transitional zeitgeist."—Will Alexander, author of Kaleidoscope Omniscience

"Plunge upward into ELADATL's phantasmagoric skies, where Los Angeles outsiders fly pirate dirigibles to legendary cities built of trash. This hip, avant, alternate history wriggles into and out of all ordinariness, transforming oppression into adventure and you, oh fortunate reader, into a witness of the glorious exploits of Swirling Alhambra and his rebel cohort. Get ready to leave the status quo behind and soar beyond the probable to the possible, your brain buoyed by this book's heady mix of fear and joy and outraged delight."—Nisi Shawl, author of Everfair: A Novel

"A fierce, bittersweet, and hilarious antidote to our increasingly deracinated personhoods and neighborhoods, ELADATL: A History of the East Los Angeles Dirigible Air Transport Lines inspires us to hold our ground in a here and now that includes futures and pasts we both know and can barely imagine. Set against the absence of Hollywood—that perfect hierarchical structure that occludes most of the actual labor that goes into making the finished product—Sesshu Foster and Arturo Romo take us through the hood and under the hood while celebrating and mourning the intimacy of social life in all its vicissitudes. Along the way, our fearless guides introduce us to the living politics of a particular place whose accumulated experience reverberates throughout the cosmos."—Ammiel Alcalay, Founder and General Editor of Lost & Found: The CUNY Poetics Document Initiative

"'The strange future of war over Los Angeles, zeppelins versus dirigibles . . . ' Sesshu Foster and Arturo Ernesto Romo capture the uncapturable. 'Experience levitation and death,' 'attune your cellular vibrations to the frequency of Star Beings,' 'the merciless winds of the human heart,' 'the Atmospheric Trash Vortex.' Who is the I here? 'The welcoming hosts at the front door, you want to look inside?' The nightmare does not erase the comedy. 'The CIA behind the million faces, hair and fingernails still growing.' 'Sign your sorrow over . . . they're taking everything; let’s give it to them, the sober whisky of Love.' Unforgetable read. 'Isn’t someone in charge?'"—Sharon Doubiago, author of My Beard: Memoir Stories

Sesshu Foster has taught composition and literature in East L.A. for 20 years. He's also taught writing at the University of Iowa, the California Institute for the Arts and the University of California, Santa Cruz. His work has been published in The Oxford Anthology of Modern American Poetry, Language for a New Century: Poetry from the Middle East, Asia and Beyond, and State of the Union: 50 Political Poems. His most recent books are Atomik Aztex, a novel; World Ball Notebook, poetry; and City of the Future, poetry (2018). He lives in Alhambra, CA.

Arturo Ernesto Romo-Santillano was born in Los Angeles, California in 1980. His artwork, mostly collaborative mixed media works but also drawing, has been circulated internationally. Fluency, agency and folly are central themes in his practice; he sees his artwork as a companion multiplier, folding folds, netting nets. His art-making is pushed through explorations on the streets of East and North East Los Angeles, which feed into an ongoing series of collaborations with writer Sesshu Foster. He lives in Alhambra, CA.