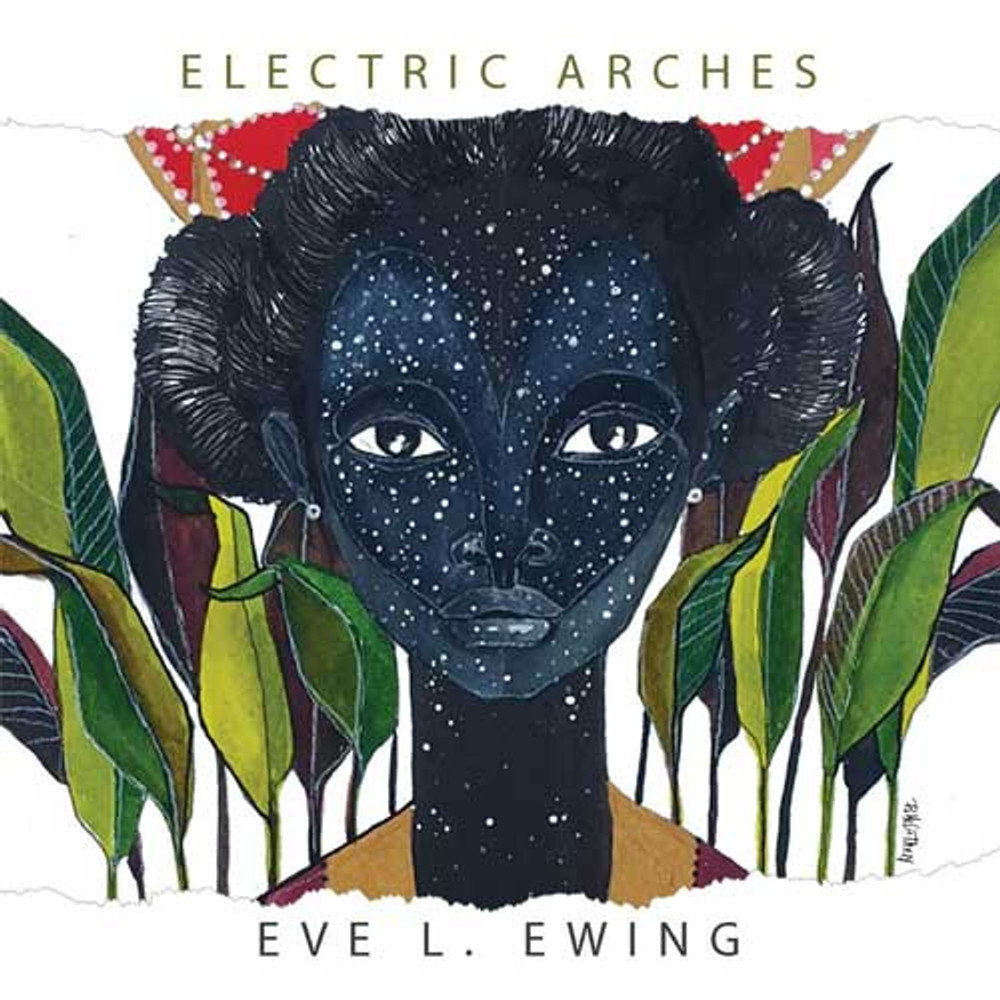 Electric Arches is an imaginative exploration of Black girlhood and womanhood through poetry, visual art, and narrative prose.

Blending stark realism with the surreal and fantastic, Eve L. Ewing’s narrative takes us from the streets of 1990s Chicago to an unspecified future, deftly navigating the boundaries of space, time, and reality. Ewing imagines familiar figures in magical circumstances―blues legend Koko Taylor is a tall-tale hero; LeBron James travels through time and encounters his teenage self. She identifies everyday objects―hair moisturizer, a spiral notebook―as precious icons.

Her visual art is spare, playful, and poignant―a cereal box decoder ring that allows the wearer to understand what Black girls are saying; a teacher’s angry, subversive message scrawled on the chalkboard. Electric Arches invites fresh conversations about race, gender, the city, identity, and the joy and pain of growing up.

"In this stunning debut, poet and sociologist Ewing brings to bear a variety of forms and mediums--including the prose poem, the lyric, mixed media collage, handwritten notes and ephemera, and the verse play--on set of related questions about the nature of art and politics. Ewing ponders what the "big fireworks" of the imagination make possible for social justice, asking how "the places we invent" can change the ways we negotiate a broken system in which the realities of a city block's crumbling infrastructure and economic destitution can limit the potential of the individual and collective alike. As the book unfolds, Ewing further refines her lines of inquiry; her subtle, provocative exploration of the boundaries between self and world allows a striking and visionary topography to take shape."
—Publishers Weekly

"This remarkable debut begins with the clearest reminders of what African Americans have endured, then takes a running leap into rapturous possibility--not as mere escape, but rather as a way of summoning up the miraculous web of hope, knowledge, love, and belief that has sustained black life in this country through unforgiving centuries. While reading, I found myself continually thinking, I had no idea you could make poetry do that, followed by, Thank God she has done this."
—National Poet Laureate Tracy K. Smith
"The spirit of this collection soars and Ewing tackles so much across the writing and art offered here.... [T]he poetry was so exact and vivid that I could smell the pink oil, feel the texture of it against my fingers. I cannot ask for more from writing. Electric Arches is well worth your time. The writing here will make you think and feel and grow."
—Roxane Gay, author of Bad Feminist and Hunger


"Ewing writes trenchantly and tenderly.... Her language is conversational, her verse lulling the reader into territory that feels immediately familiar, even when it isn't."
—The Paris Review

Eve L. Ewing is a writer, scholar, artist, and educator from Chicago. Her work has appeared in Poetry, The New Yorker, New Republic, The Nation, The Atlantic, and many other publications. She is a sociologist at the University of Chicago School of Social Service Administration.

Women Who Run with the Wolves: Myths and Stories of the Wild Woman Archetype