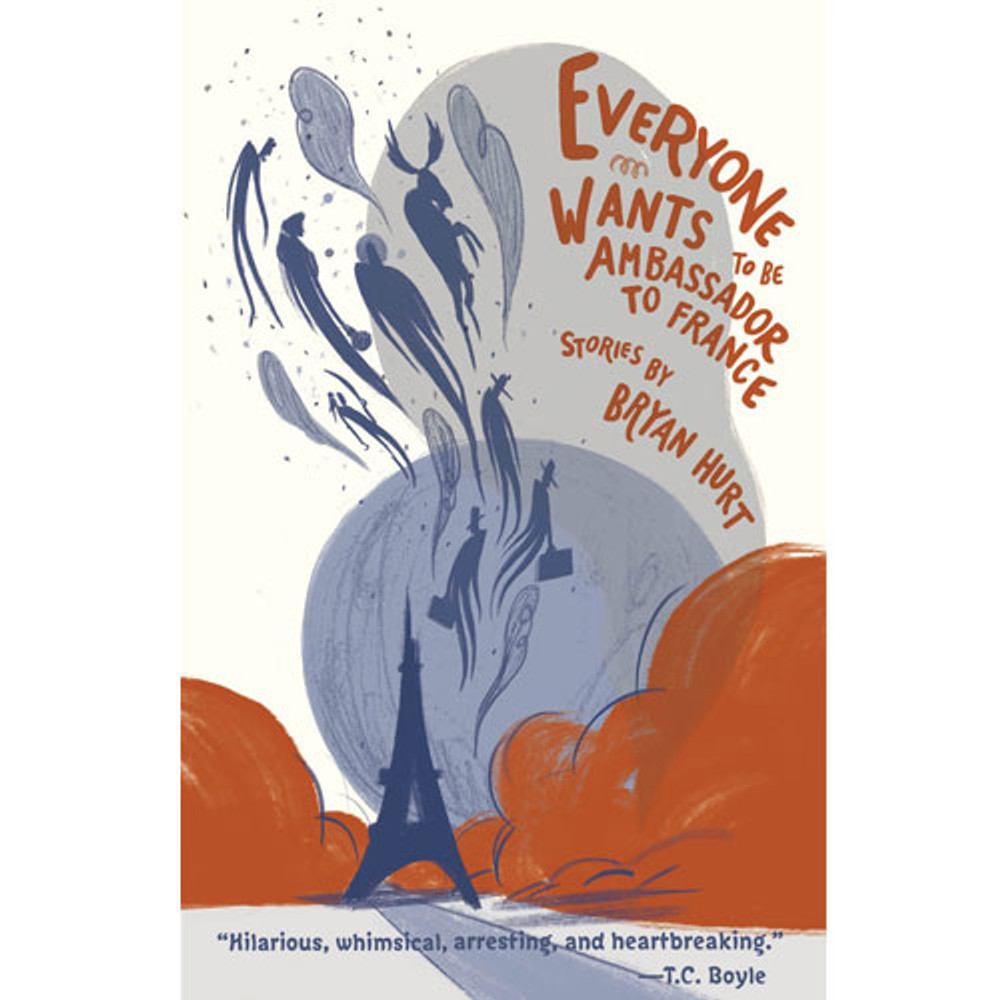 Everyone Wants to be Ambassador to France

A seagull, a goat, and a teenage boy enter into a bizarre love triangle that leaves one of them dead and the other two changed forever. A grief-stricken astronaut quits NASA to paint pictures of the moon. A lonely scientist creates stars in his basement and becomes enraged when he discovers that one of his stars harbors life. An eighteenth-century British aristocrat adopts two teenage girls and absconds with them to France, determined to raise one of them to become his perfect wife. By turns humorous and heartbreaking, this debut collection offers weird and wonderful stories that illuminate the hidden truths of life.

“Bryan Hurt’s stories are like no one else’s. They are by turns hilarious, whimsical, arresting, and heartbreaking, but what makes them such a delight is the sly simplicity and off-handed charm of their telling.” ―T.C. Boyle

“I have been a longtime fan of Bryan Hurt’s stories and what a joy to have them all together now in this book! They are a soup pot of the funniest dry sentences plus unusual facts that he unearthed from who knows where, and an unstated humanity tucked inside those facts, and a constant eye on the oddness of culture and the lilt of a well-placed phrase and a carrot. In our endlessly data-packed world, Hurt’s keen sparseness is a welcome addition to the bookshelves.” ―Aimee Bender

“The breadth of this is a phenomenal celebration, a catalogue of possibility, of the infinite versatility of short-form writing. Hurt’s fabulist imagination, wicked dry humor, and core emotional truths challenge, dazzle, and ignite.” ―Alissa Nutting

“Everyone Wants To Be Ambassador to France is swift and spare, a collection to devour and admire. Spectacular!” ―Aspen Matis, author of the internationally bestselling memoir Girl in the Woods

"Bryan Hurt’s stories operate under the logic of the sentence, finding within even the most familiar grammatical recipes the possibilities for music, and for humor, and for pathos. Hurt’s infectious curiosity―about everything from history to science to pop culture―means that these stories have enormous breadth, and yet they are also some of the most intimately human I’ve ever read. The lightness of Hurt’s touch belies a startling sincerity. His stories attend with unfussy wit and true feeling to what it means to live as a father, as a boyfriend and husband, as an explorer and writer and inventor, and as one small god among the many." ―Emily Fridlund, author of History of Wolves

Bryan Hurt is the editor of Watchlist: 32 Stories by Persons of Interest. His stories and essays have appeared in The American Reader, Guernica, The Kenyon Review, The Los Angeles Review, TriQuarterly, and many other publications. He is an assistant professor of English at Capital University in Columbus, OH, where he lives with his family.

So You Want to Talk About Race