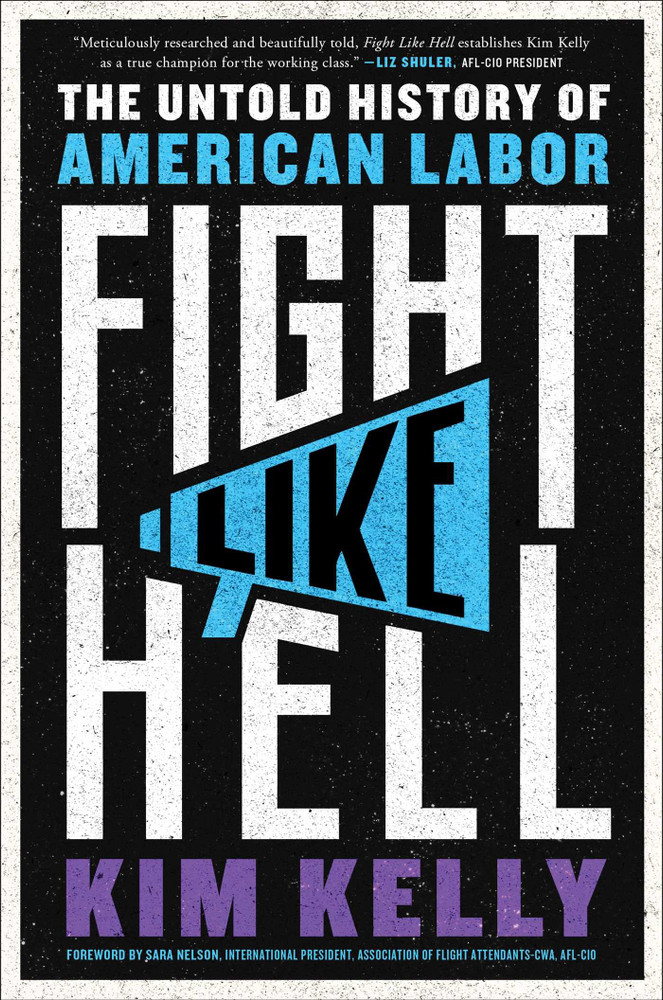 Join us for a reading and conversation with author Kim Kelly on Wednesday, June 22 at 8pm (doors open at 7:30pm). Register for event.

“Kelly unearths the stories of the people-farm laborers, domestic workers, factory employees—behind some of the labor movement’s biggest successes.” —The New York Times

A revelatory and inclusive history of the American labor movement, from independent journalist and Teen Vogue labor columnist Kim Kelly.

Freed Black women organizing for protection in the Reconstruction-era South. Jewish immigrant garment workers braving deadly conditions for a sliver of independence. Asian American fieldworkers rejecting government-sanctioned indentured servitude across the Pacific. Incarcerated workers advocating for basic human rights and fair wages. The queer Black labor leader who helped orchestrate America’s civil rights movement. These are only some of the working-class heroes who propelled American labor’s relentless push for fairness and equal protection under the law.

The names and faces of countless silenced, misrepresented, or forgotten leaders have been erased by time as a privileged few decide which stories get cut from the final copy: those of women, people of color, LGBTQIA people, disabled people, sex workers, prisoners, and the poor. In this assiduously researched work of journalism, Teen Vogue columnist and independent labor reporter Kim Kelly excavates that history and shows how the rights the American worker has today—the forty-hour workweek, workplace-safety standards, restrictions on child labor, protection from harassment and discrimination on the job—were earned with literal blood, sweat, and tears.

Fight Like Hell comes at a time of economic reckoning in America. From Amazon’s warehouses to Starbucks cafes, Appalachian coal mines to the sex workers of Portland’s Stripper Strike, interest in organized labor is at a fever pitch not seen since the early 1960s.

Inspirational, intersectional, and full of crucial lessons from the past, Fight Like Hell shows what is possible when the working class demands the dignity it has always deserved.

“Kelly unearths the stories of the people—farm laborers, domestic workers, factory employees—behind some of the labor movement’s biggest successes.”
—The New York Times

“Kim Kelly's debut is a knockout... Catalyzed by a passionate voice and brisk pacing, Fight Like Hell will leave you with a renewed sense of readiness in your bones.”
—Morgan Jerkins, New York Times Bestselling author of This Will Be My Undoing, Wandering in Strange Lands, and Caul Baby

“As Kim Kelly writes in her book, every story is a labor story. [Fight Like Hell] offers a fuller picture of the history of labor in America and shows how fights previously not considered labor fights were in fact battles for workers' rights, whether it was abolishing slavery, liberating women, ensuring those disabled by work got fair treatment and those born with disabilities had a chance at a fair wage.”
—Eric Garcia, author of We're Not Broken: Changing the Autism Conversation

“Fight Like Hell is the most important book on labor published in a generation."
—Shane Burley, author of Why We Fight: Essays on Fascism, Resistance, and Surviving the Apocalypse

“FIGHT LIKE HELL tells the inspiring stories of badass working class heroes who have all too often been written out of history. We need to hear these voices now more than ever, and Kim Kelly vibrantly brings their struggles and sacrifices to life.”
—Tom Morello, musician, actor, political activist, and lead guitarist for Rage Against the Machine and Audioslave

“In FIGHT LIKE HELL you'll find the true stories of people who have fought to win a better world for themselves and everyone else who has to work for a living.”
—Jeremy Brecher, author of National Bestseller Strike!

“In this remarkable interweaving of past and present, Kim Kelly brings America’s rich (and bloody) labor history, its most marginalized workers, and their most recent battles to vivid life [...] At once urgent and insightful, FIGHT LIKE HELL not only informs, it inspires.”
—Joseph A. McCartin, Executive Director, Kalmanovitz Initiative for Labor & the Working Poor, Georgetown University

“No one is more passionate about workers' struggles than Kim Kelly, and it shows. Let her take you on a wild ride through American labor history, introducing you to some of labor's unsung heroes, inspiring victories, and tragic defeats. This book will change how you think about the labor movement.”
—Sarah Jaffe, author of Work Won't Love You Back

“A rousing look at the contributions of marginalized groups to the U.S. labor movement [and] a powerful call for today’s workers to fight for their rights.”
—Publisher's Weekly

“Freshly inclusive [...] an excellent entry point for a new understanding of work in America.”
—Booklist

“A well-reasoned argument for restoring unions to their former role in the lives of American workers.”
—Kirkus

“Meticulously researched and beautifully told, [in FIGHT LIKE HELL] Kim Kelly has established herself as a true champion for the working class.”
—Liz Shuler, AFL-CIO President

“Kim Kelly throws wide the doors to inspire all of us to seize power for ourselves by showing how—yesterday and today—the oppressed overlooked, the outcasts and the misfits, shaped history. ”
—Sara Nelson, International President, Association of of Flight Attendants-CWA, AFL-CIO

“In Fight Like Hell, Kim Kelly introduces us to the lesser-known heroes and she-roes of the American labor movement past and present, from Black washerwomen and Chinese garment workers to trans truckers and incarcerated female firefighters. Kelly poignantly reminds us of the revolutionary power of organizing and offers a clarion call for action and solidarity today. This is a thrilling, energizing—and absolutely necessary—book, and a must-read.”
—Dr. Allyson Brantley, Assistant Professor of History & Director of Honors and Interdisciplinary Initiatives at the University of La Verne, in Southern California and author of Brewing a Boycott: How a Grassroots Coalition Fought Coors & Remade American Consumer Activism

“Kim Kelly has written the perfect book for the era of the "Great Resignation.” Filled with revolutionary spirit, Fight Like Hell highlights the contributions of labor leaders both known and obscure, deftly connecting the struggles of the past to the present while proving that every story is a labor story when workers matter. ”
—Elizabeth Catte, historian and author of What You Are Getting Wrong About Appalachia and Pure America: Eugenics and The Making of Modern Virginia

“Kim Kelly is a fresh and compelling voice telling the critical stories of working families that so many others ignore. The struggles of workers to form and build their unions in the face of exploitation and abuse have gone untold for far too long. This book breaks through that silence and brings the voices of workers and their families to the forefront where they belong.”
—Cecil Roberts, International President, United Mine Workers of America

“The stories Kim Kelly tells provide examples of inspiration and often hope—at a time when the inequalities and injustices that working people endure must no longer be tolerated. And they remind us that nothing changes unless we fight like hell for it.”
—Stuart Appelbaum, President of the Retail, Wholesale and Department Store Union (RWDSU)

“A wonderful, vivid portrait gallery of ordinary leaders in their moments of courage across the long sweep of our history. FIGHT LIKE HELL shows that working-class struggle isn’t just something that happens, it’s something that people do—they find the sources of courage in their lives, step out front, and try to get others to follow.”
—Gabriel Winant, Assistant Professor of History at the University of Chicago and author of The Next Shift: The Fall of Industry and the Rise of Health Care in Rust Belt America

“History at its finest and fiercest—providing both a genealogy for contemporary labor struggles and a new pantheon of icons for today’s activists. Deeply researched and powerfully written, Kim Kelly’s bold new book will change the way you see work, workers, and our collective fight for a fairer future.”
—Scott W. Stern, Yale University historian and author of The Trials of Nina McCall: Sex, Surveillance, and the Decades-Long Government Plan to Imprison "Promiscuous" Women

Kim Kelly is an independent journalist, author, and organizer. She has been a regular labor columnist for Teen Vogue since 2018, and her writing on labor, class, politics, and culture has appeared in The New Republic, The Washington Post, The New York Times, The Baffler, The Nation, the Columbia Journalism Review, and Esquire, among many others. Kelly has also worked as a video correspondent for More Perfect Union, The Real News Network, and Means TV. Previously, she was the heavy metal editor at “Noisey,” VICE’s music vertical, and was an original member of the VICE Union. A third-generation union member, she is a member of the Industrial Workers of the World’s Freelance Journalists Union as well as a member and elected councilperson for the Writers Guild of America, East (WGAE). She was born in the heart of the South Jersey Pine Barrens, and currently lives in Philadelphia with a hard-workin’ man, a couple of taxidermied bears, and way too many books.