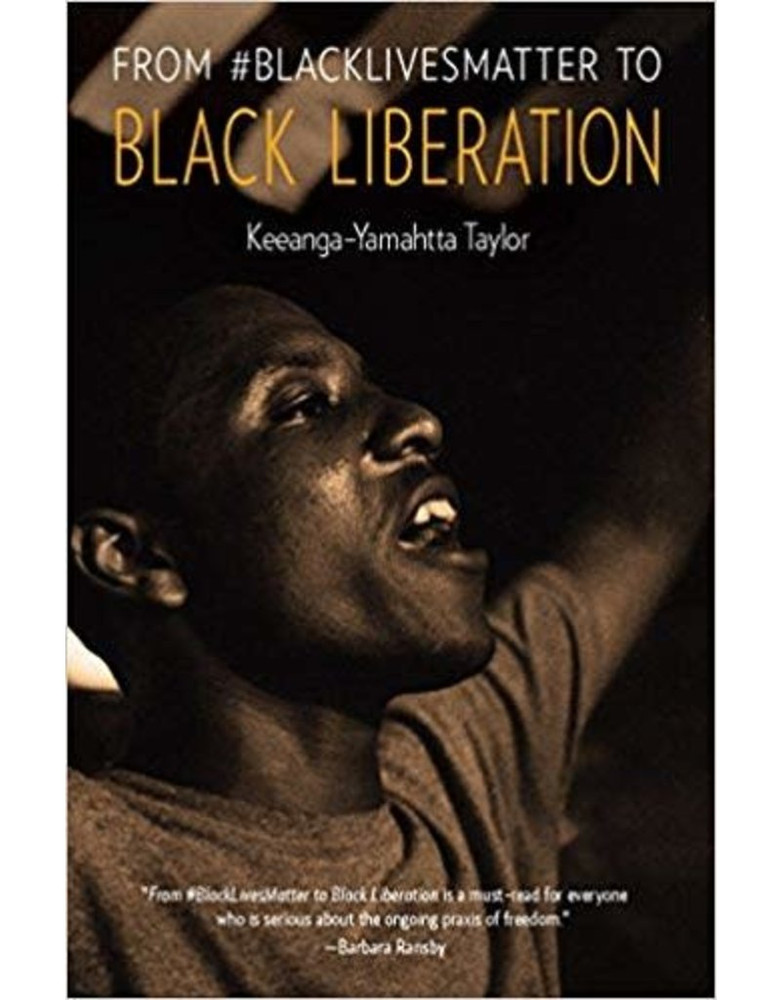 From #Blacklivesmatter to Black Liberation

The eruption of mass protests in the wake of the police murders of Michael Brown in Ferguson, Missouri and Eric Garner in New York City have challenged the impunity with which officers of the law carry out violence against Black people and punctured the illusion of a postracial America. The Black Lives Matter movement has awakened a new generation of activists.

In this stirring and insightful analysis, activist and scholar Keeanga-Yamahtta Taylor surveys the historical and contemporary ravages of racism and persistence of structural inequality such as mass incarceration and Black unemployment. In this context, she argues that this new struggle against police violence holds the potential to reignite a broader push for Black liberation.

"Ultimately, From #BlackLivesMatter to Black Liberation is an essential read for anyone following the movement for Black Lives. The text chronicles a portion of history we rarely ever see, while also bringing together data and deep primary source research in a way that lucidly explains the origins of the current moment."
—Los Angeles Review of Books

“This brilliant book is the best analysis we have of the #BlackLivesMatter moment of the long struggle for freedom in America. Keeanga-Yamahtta Taylor has emerged as the most sophisticated and courageous radical intellectual of her generation.”
—Dr. Cornel West

"Keeanga-Yamahtta Taylor's searching examination of the social, political and economic dimensions of the prevailing racial order offers important context for understanding the necessity of the emerging movement for black liberation."
—Michelle Alexander, author of The New Jim Crow

"Keeanga-Yamahtta Taylor’s has not written the average rushed first-wave book on a social movement. Taylor, a professor of African American studies at Princeton, is the rare academic writer whose sense of humor is as sharp as her scholarship. She’s written a sweeping yet concise history not just of the Black Lives Matter movement, but of the past seven years under the first black president and of how the 20th century led to our current state of woke uprising. It’s full of gems of historical insight and it fearlessly tackles what black liberation looks like when it happens in a black-governed city 40 miles from a black-occupied White House.”
—Steven Thrasher, The Guardian

"Class Matters! In this clear-eyed, historically informed account of the latest wave of resistance to state violence, Keeanga-Yamahtta Taylor not only exposes the canard of color-blindness but reveals how structural racism and class oppression are joined at the hip. If today’s rebels ever expect to end inequality and racialized state violence, she warns, then capitalism must also end. And that requires forging new solidarities, envisioning a new social and economic order, and pushing a struggle to protect Black Lives to its logical conclusion: a revolution capable of transforming the entire nation."
—Robin D. G. Kelley, author of Freedom Dreams: The Black Radical Imagination

"With political eloquence, intellectual rigor, and an unapologetically left analysis,the brilliant scholar-activist Keeanga Taylor has provided a powerful contribution to our collective understanding of the current stage of the Black freedom struggle in the United States, how we arrived at this point, and what battles we need to fight in order to truly achieve liberation. From #BlackLivesMatter to Black Liberation is a must read for everyone who is serious about the ongoing praxis of freedom."
—Barbara Ransby, author of Ella Baker and the Black Freedom Movement: A Radical Democratic Vision

"Keeanga-Yamahtta Taylor has a strong voice, a sharp mind and a clear, readable style that all come together in this penetrating, vital analysis of race and class at this critical moment in America's racial history."
—Gary Younge, editor-at-large for the Guardian

"Keeanga-Yamahtta Taylor brings the long history of Black radical theorizing and scholarship into the neoliberal 21st century with From #BlackLivesMatter to Black Liberation. Her strong voice is deeply needed at a time when young activists are once again reforging a Black liberation movement that is under constant attack. Deeply rooted in Black radical, feminist and socialist traditions, Taylor’s book is an outstanding example of the type of analysis that is needed to build movements for freedom and self-determination in a far more complicated terrain than that confronted by the activists of the 20th century. Her book is required reading for anyone interested in justice, equality and freedom."
—Michael C. Dawson, author of Blacks In and Out of the Left

"Mainstream political discourse right now, not only but particularly in the US, seems to be on a race to the bottom, eager to plumb and rehabilitate new depths of vileness. The #BlackLivesMatter movement has been one inspiring and salutary dissenting tendency to that and it couldn’t have a better analyst. Comradely and sympathetic without losing critical edge, Taylor always combines anger and rigor with rare and clear subtlety. Her examination of the changing contours of radical race politics is bound to be indispensable."
—China Miéville

"This book should be read widely. It's a powerful, concise account of why the Black Lives Matter movement has erupted and why it's needed. It is a clear-eyed and morally righteous work informed by a deep understanding of history and social policy, one that patiently and painstakingly illustrates the ways racism and capitalism are intertwined. Ultimately Taylor presents a powerful argument for social movements, for building power outside of electoral politics that can take on structural inequities. I found myself underlining something on almost every page."
–Astra Taylor, author of The People’s Platform

“From #BlackLivesMatter to Black Liberation is a profoundly insightful book from one of the brightest new lights in African American Studies. Keeanga Yamahtta-Taylor invites us to rethink the postwar history of the US and to place the actions of everyday people, including the hundreds of thousands of African Americans who participated in the urban rebellions and wildcat strikes of 1960s and 1970s, at the forefront of American politics. By doing so, she offers up a “usable past” for interpreting the current anti-state sanctioned violence movement sweeping the U.S. in the early twenty-first century. This timely volume provides much needed analysis not only of race and criminalization in modern American history, but of the specific roles played by a bi-partisan electoral elite, the corporate sector, and the new black political class in producing our current onslaught of police killings and mass incarceration in the years since the Voting Rights Act’s passage. Yamahtta-Taylor’s fluent voice as historian and political theorist renders legible the accomplishments and, perhaps most importantly, the expansive possibilities of a new generation of black youth activism.”
—Donna Murch, author of Living for the City: Migration, Education, and the Rise of the Black Panther Party in Oakland, California

"Keeanga-Yamahtta Taylor has given us an important book, one that might help us to understand the roots of the contemporary policing crisis and build popular opposition capable of transforming the current, dismal state of affairs. Equal parts historical analysis and forceful polemic, From #BlackLivesMatter to Black Liberation provides a much-needed antidote to the post-racial patter that has defined the Obama years, but it also serves as a proper corrective for the “new civil rights movement” posturing of some activists. Against such nostalgic thinking, Taylor reminds us of the new historical conditions we face, and the unique challenges created by decades of African American political integration. From #BlackLivesMatter to Black Liberation sketches a politics that rightly connects anti-police brutality protests and a broader anti-capitalist project. Everyone who has grown sick of too many undeserved deaths at the hands of police and vigilantes should read and debate this book."
—Cedric G. Johnson, author of Revolutionaries to Race Leaders: Black Power and the Making of African American Politics

“One by one, Taylor traces the origins of concepts such as ‘culture of poverty’, family breakdown and so on – and demolishes them as examples of ideological reaction against the threat of civil rights to establishment power.” –Red Pepper

“From #BlackLivesMatter to Black Liberation is a must-read for those interested in understanding racism and inequality in modern society...a quintessential manifesto for the underrepresented, unappreciated black peoples and their allies. This book demands not only a constitutional change, but a revolution that will free black people from an inherently biased system.” –Luke de Noronha, Birkbeck College, University of London, Ethnic and Racial Studies

“Taylor's book is a recommended read. Not only an analysis of contemporary protest, but an illuminating history of institutional and structural racism in the USA, an incisive critique of 'Black Faces In High Places' and a valuable insight on how struggles against police racism, brutality and murder might be, must be, broadened and linked to others” –Just Books

Keeanga-Yamahtta Taylor writes on Black politics, social movements, and racial inequality in the United States. Her articles have been published in Souls: A Critical Journal of Black Politics, Culture and Society, Jacobin, New Politics, the Guardian, In These Times, Black Agenda Report, Ms., International Socialist Review, Al Jazeera America, and other publications. Taylor is assistant professor in the department of African American Studies at Princeton University.

Young, Gifted and Black: Meet 52 Black Heroes from Past and Present

Farming While Black: Soul Fire Farm's Practical Guide to Liberation on the Land