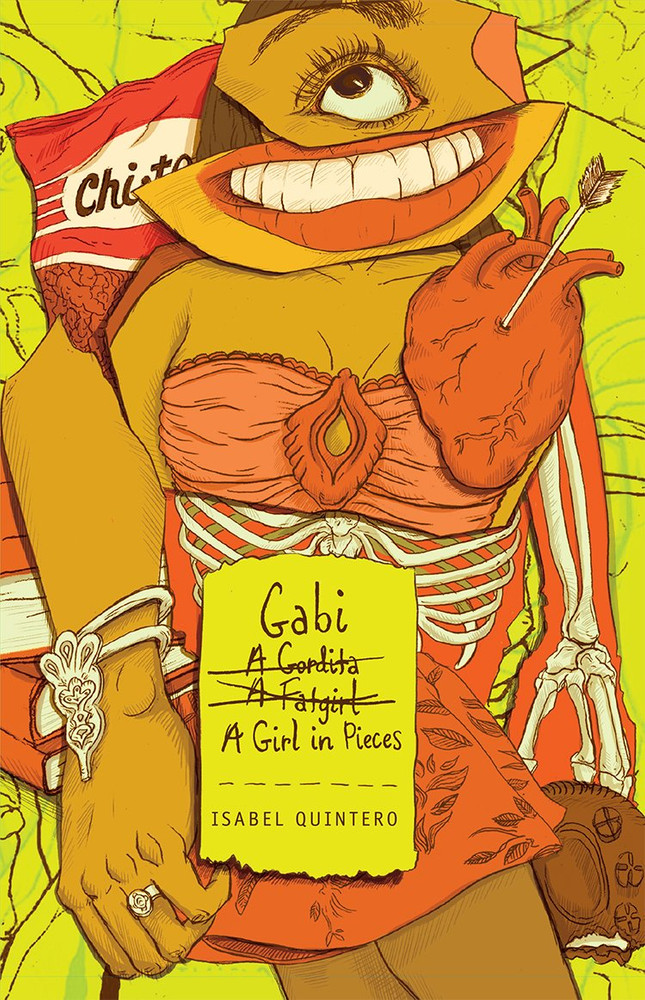 Gabi, a Girl in Pieces

This title is the February 2020 pick for the YOUNG FEMINIST BOOKCLUB! Find out more here.

Gabi Hernandez chronicles her last year in high school in her diary: college applications, Cindy's pregnancy, Sebastian's coming out, the cute boys, her father's meth habit, and the food she craves. And best of all, the poetry that helps forge her identity.

My mother named me Gabriella, after my grandmother who, coincidentally, didn't want to meet me when I was born because my mother was unmarried, and therefore living in sin. My mom has told me the story many, many, MANY, times of how, when she confessed to my grandmother that she was pregnant with me, her mother beat her. BEAT HER! She was twenty-five. That story is the basis of my sexual education and has reiterated why it's important to wait until you're married to give it up. So now, every time I go out with a guy, my mom says, "Ojos abiertos, piernas cerradas." Eyes open, legs closed. That's as far as the birds and the bees talk has gone. And I don't mind it. I don't necessarily agree with that whole wait until you're married crap, though. I mean, this is America and the 21st century; not Mexico one hundred years ago. But, of course, I can't tell my mom that because she will think I'm bad. Or worse: trying to be White.

"One of the year's finest young adult novels." —Largehearted Boy

"Believing she's not Mexican enough for her family and not white enough for Berkeley, Gabi still meets every challenge head-on with vulgar humor and raw honesty… A refreshing take on slut- and fat-shaming, Quintero's work ranks with Meg Medina's Yaqui Delgado Wants to Kick Your Ass and Junot Diaz's Drown as a coming-of-age novel with Latino protagonists." —School Library Journal, starred review

"Readers won't soon forget Gabi, a young woman coming into her own in the face of intense pressure from her family, culture and society to fit someone else's idea of what it means to be a 'good' girl. A fresh, authentic and honest exploration of contemporary Latina identity." —Kirkus Reviews, starred review

"Reading Quintero’s debut is like attending a large family fiesta: it’s overpopulated with people, noise, and emotion, but the overall effect is joyous." —Booklist, starred review

"Told through Gabi’s diary, the book is tragic, hilarious, and always whip-smart. It’s also, I’m sure, one of the most diverse and all-encompassing YA novels out there." —John Hansen, The Guardian

"While reflecting the specific experiences of one overweight, Mexican-American teenager, Quintero’s debut novel addresses a number of universal themes, from family relationships to sexual exploration. Gabi’s voice, as expressed in her diary through poetry, prose, lists, and overheard conversations, is funny, smart, full of wonder, and brutally honest." —VOYA Magazine, starred review

"Gabi's voice is a completely bicultural and bilingual voice, so throughout the novel, you will have Spanish and English the way it's really spoken in our families — it's this crazy sort of Spanglish mix. And she's bold. She will say the quote-unquote unthinkable things about her body, about sexuality, about the crazy, dual sets of rules for Latino boys and girls.” —Meg Medina, author of Yaqui Delgado Wants to Kick Your Ass, for NPR

"Quintero’s novel shows that some of the most interesting, innovative, and honest titles come from the small press world. … Award committees take note—this is an amazing novel from a bright new star." —Lyn Miller-Lachmann, The Pirate Tree

"California high school senior Gabriella (Gabi Hernanadez) is caught between not being Mexican enough and gravitating toward the things white girls do — at least according to her mother. To make sense of her world, she keeps a journal about her own struggles with self-esteem and related weight issues, also writing about her best friend Cindy’s pregnancy and her other best friend Sebastian’s coming out to his family." —Karen Hildebrand, Literacy Daily

“Wish this book had been around during my angst youth, but at least you can pick it up now and revel in the author’s grace and humor in dealing with very heavy subject matter. Isabel Quintero reminds us of the transformative power of journal writing, as well.” —Stacey Lewis, City Lights Publishers

"Isabel Quintero’s young adult novel 'Gabi: A Girl in Pieces' centers around a young, light-skinned Mexican-American girl. … Like Gabi, I feel I need to prove my identity all the time." —Melissa Lozada-Oliva, The Guardian

Isabel Quintero is an award-winning writer from the Inland Empire of Southern California. She is also the daughter of Mexican immigrants. In addition to Gabi, A Girl in Pieces, she has also written a chapter book series for young readers, Ugly Cat and Pablo (Scholastic, Inc.), a non-fiction YA graphic biography, Photographic: The Life of Graciela Iturbide (Getty Publications, 2018), which received the Boston Globe Horn Book Award, and most recently, a picture book, My Papi Has a Motorcycle (Kokila, 2019). Isabel also writes poetry and essays. Her work can be found in The Normal School, Huizache, The Acentos Review, As/Us Journal, The James Franco Review, and other publications.

Girl at the Door