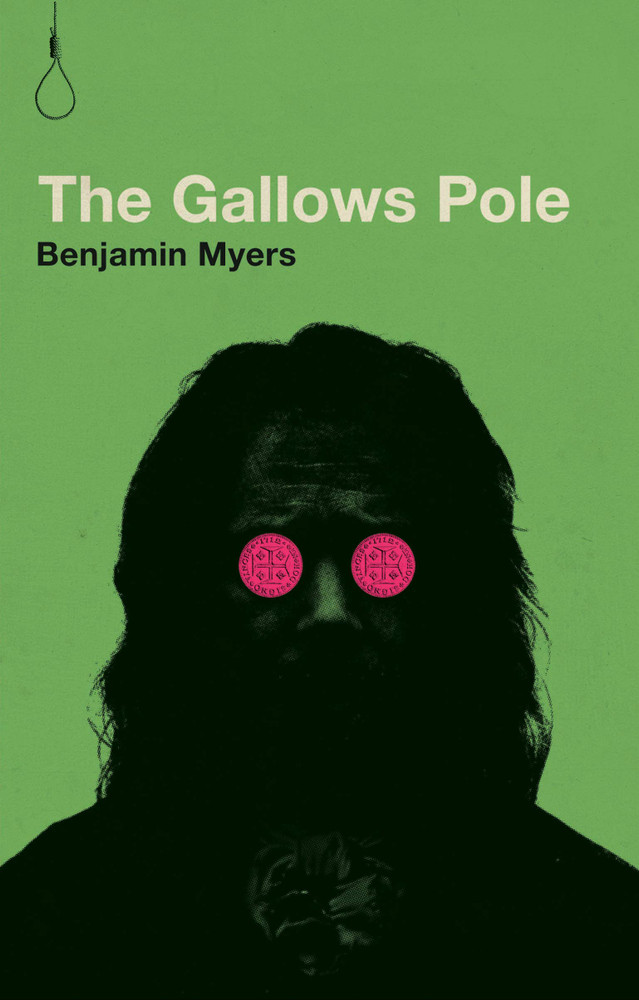 Set in the moorland hills of 18th century Yorkshire, The Gallows Pole is the true story of an organized crime of forgers known as the Cragg Vale Coiners. Lead by the charismatic ‘King David Hartley, a man prone to violence and mystical visions, they rise to glory until the bloody murder of a government official brings them to the attention of the authorities. An English western, The Gallows Pole is a poetic and visceral telling of a secret history and a wild landscape. It explores contemporary themes including wealth, abuse of power, class, corruptions, borders and boundaries and national identity.

“Not only one of my books of the year, but it also has my cover of the year: Sergeant Pepper meets The Omen by way of 1930s paperbacks. It’s the best thing Myers has done; fierce gale-driven prose that speaks to and of the northern English landscape out of which the story rises.” – Robert Macfarlane, Book of the Year, The Big Issue
“Myers’s obsession with place and power is urgently contemporary. Society is fragile. The walls can, and do, collapse. Today the political shocks of Brexit and Trump make this obvious in a way it hasn’t been for a long time: the strand of malevolent machismo that seemed like deliberately shocking Gothic in Myers’s 2014 novel Beastings feels closer to home now. It seems as though Myers, seer-like, has merely had to wait for the world outwardly to become as he long ago divined it to be…His element is violence and, in his element, he is thrilling: intelligent, dangerous and near untouchable.” – New Statesman
“The Gallows Pole may well turn out to be 2017’s His Bloody Project. It’s a windswept, brutal tale of eighteenth-century Yorkshire told in starkly beautiful prose.” – Alex Preston, The Guardian
“Atmospheric alt-crime at its best.” – NME

Benjamin Myers was born in Durham, UK, in 1976. He is in an award-winning author, poet and journalist, translated into several languages. His novel Beastings (2014) won the Portico Prize For Literature and was recipient of the Northern Writers’ Award. Pig Iron (2012) was the winner of the inaugural Gordon Burn Prize and runner-up in The Guardian’s Not The Booker Prize. A controversial combination of biography and novel, Richard (2010) was a bestseller, chosen as a Sunday Times book of the year. Myers’ ‘folk crime’ novels Turning Blue (2016) and These Darkening Days (2017) were widely acclaimed by critics including Val McDermid. His latest book Under The Rock, a non-fiction work, has been described as “a bold and original exploration of nature and literature that firmly establishes him firmly among the first ranks of Britain’s most exciting writers of landscape and place.” The Gallows Pole was the recipient of Roger Deakin Award and longlisted for both the 2018 Walter Scott Prize and the Republic of Consciousness Prize. As a journalist he has written about music, the arts and nature for publications including New Statesman, The Guardian, The Spectator, NME, Mojo, Time Out, New Scientist, Caught By The River, Record Collector, Vice, The Quietus, Melody Maker, Metal Hammer, Alternative Press, and many others. His short stories and poetry have appeared in dozens of print and small press anthologies, chapbooks and underground obscurities. His new novel The Offing is published by Bloomsbury in August 2019. Benjamin Myers currently lives in the Upper Calder Valley, West Yorkshire, UK.