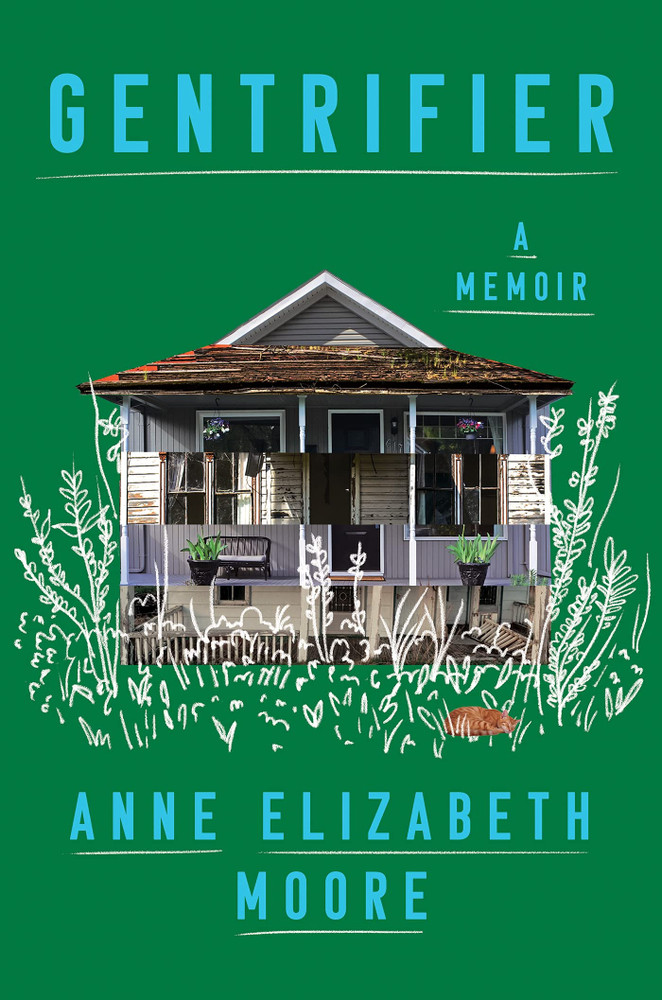 Taking on the thorny ethics of owning and selling property as a white woman in a majority Black city and a majority Bangladeshi neighborhood with both intelligence and humor, this memoir brings a new perspective to a Detroit that finds itself perpetually on the brink of revitalization.

In 2016, a Detroit arts organization grants writer and artist Anne Elizabeth Moore a free house—a room of her own, à la Virginia Woolf—in Detroit’s majority-Bangladeshi “Banglatown.” Accompanied by her cats, Moore moves to the bungalow in her new city where she gardens, befriends the neighborhood youth, and grows to intimately understand civic collapse and community solidarity. When the troubled history of her prize house comes to light, Moore finds her life destabilized by the aftershocks of the housing crisis and governmental corruption.

This is also a memoir of art, gender, work, and survival. Moore writes into the gaps of Woolf’s declaration that “a woman must have money and a room of one’s own if she is to write”; what if this woman were queer and living with chronic illness, as Moore is, or a South Asian immigrant, like Moore’s neighbors? And what if her primary coping mechanism was jokes?

Part investigation, part comedy of a vexing city, and part love letter to girlhood, Gentrifier examines capitalism, property ownership, and whiteness, asking if we can ever really win when violence and profit are inextricably linked with victory.

"Moore also holds the serious alongside the hilarious, and the clarity and intelligence of her prose illuminates both. Original, funny, and brilliant, this book outmaneuvers, outshines, and will outlive so many memoirs that seek to cover the same tenuous ground." —Kerri Arsenault, Orion Magazine

"Moore infuses this memoir with keenly researched insights about the historical forces that created Detroit’s (and America’s) housing crisis, creating a heartfelt, funny, thought-provoking meditation on the multifaceted fallacy of the American Dream." —Booklist (starred review)

"Eye-opening . . . A unique, lovely meditation on the power of community." —Kirkus Reviews

"Incisive . . . A trenchant meditation on how communities come together, and the forces that drive them apart." —Publishers Weekly

"Both comedic and fierce . . . Moore’s experiences will draw in readers interested in an intimate perspective on housing issues or life in recent Detroit. She provides thoughtful perspective on community, capitalism, and making art in difficult times." —Library Journal

"This kaleidoscopic page-turner chronicles the absurdities and hard-won joys of existing in a body, a household, a community, and a country. I don't know how Anne managed to write the funniest book I've read in years *and* the most honest one about the scramble of American life, but she did, and we are the better for it." —Jace Clayton, author of Uproot

"Gentrifier is a fascinating read: a writer's dream comes true and she is given a house of her own, a house to write in, but things do not go as planned. Anne Elizabeth Moore is a superb and compassionate writer; this is a sweet, difficult, excellent book." —Audrey Niffenegger, author of The Time Traveler's Wife

"With wry humor and uncommon insight, Anne Elizabeth Moore crafts an intimate portrait of self-determination and communal possibility in a resilient Detroit neighborhood. Yes, this book is about gentrification, but it is also about neighborhood sustainability, government corruption, nonprofit hypocrisy, chronic illness, gardening, girlhood, family, racism, education, misogyny, autonomy, queer striving, a writer’s life, and the elusive and ever-present search for home." —Mattilda Bernstein Sycamore, author of The Freezer Door

"Gentrifier is an indictment of institutionalized racism, xenophobia, and greed—in both public and private spheres. But the heart of the book lies with Moore's personal story, told with warmth and self-deprecating wit, breezy and deep in turn." —Abeer Hoque, author of Olive Witch

"Funny, tender, rigorous, and alive, Anne Elizabeth Moore’s Gentrifier is the best book I’ve read on this freighted subject, and so much more. Along the way, you learn a lot about the wonders and complexities of one particular neighborhood in Detroit, but in turn your own community—what you’ve overlooked, and all you want to make better. A tour de force by a writer who is smart enough to let activism and absurdity sit side by side, and let them go. I’m in awe.” —Paul Lisicky, author of Later: My Life at the Edge of the World

"Anne Elizabeth Moore's writing pulls no punches, rolls up its sleeves, and digs into difficulty with grace and aplomb. Gentrifier is a beautiful, complicated ode to a city, to creativity, and to community. It is funny, it is devastating, it is insightful. It is a tremendous call for change. I would read anything Moore writes—including her grocery list—and happily. Read this." —Kayla Rae Whitaker, author of The Animators

"Anne Elizabeth Moore is one of our great chroniclers of the collisions between the personal and the political. A contemporary A Room of One's Own, Gentrifier interrogates the relationships between class, race, gender, religion, sexuality, economics, love, community, and the medical industrial complex, all through the lens of Moore's experience of being given a 'free' house in Detroit. This story of a house, a city, and what it means to be a woman on one's own illuminates the utterly compelling complexities that lie beneath the veneer of what outsiders can glimpse in this one of a kind American city. Moore offers a window through which we can deeply examine the beauties, booby-traps, and at times Kafkaesque logistics of what it means to be an artist in the contemporary Midwestern landscape." —Gina Frangello, author of Blow Your House Down

Beyond the High Blue Air: A Memoir