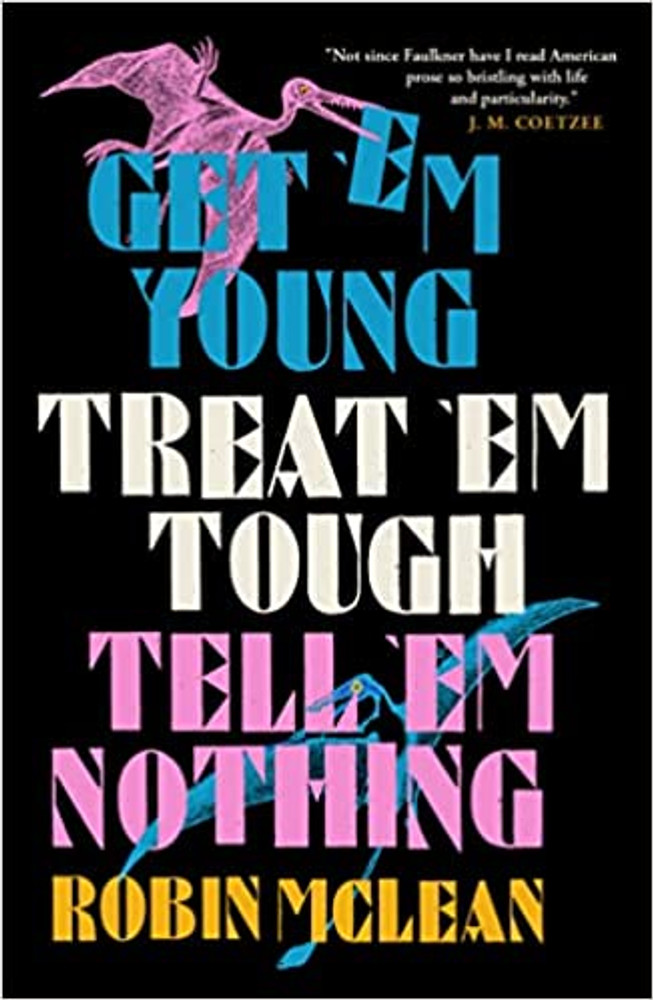 Dark, profane, and hilarious, yet ultimately humane, these ten stories are the latest and best of Robin McLean’s reports from the eternal battlefront that is the United States. Ranging across the continent, from Alaska to Missouri, from the flatlands to the mountains, each tale is a snapshot of the political, racial, and sexual undercurrents roiling contemporary life, and each finds a way into the nerves and blood that pulse beneath the question of how to live a decent life.

Here you'll find stolen children living life to the fullest on the run and on the road, soldiers guarding empty frontiers, and rugged individualists brought low by an uncaring nature. You'll find prehistoric beasts rubbing talons with hustlers as well as death machines lurking beneath the bucolic countryside. Here you'll find hatred, friendship, and pitch-black humor all seething in the same stew.

Get ’em Young, Treat ’em Tough, Tell ’em Nothing marries the sardonic moral and political explorations of a Flannery O’Connor to the surreal, scuzzy wit of a Denis Johnson. It is a brazen State of the Union for a nation on the edge.

“[McLean’s] prose moves with muscle and rhythm, the dialogue swift and captivating … circumstances are rough, even dire, and people are worn out, angry, smart and stubbornly, vigorously alive … McLean unsentimentally renders their various precipices with incredible energy and humor ... [McLean is] a writer who refuses to unsharpen her vision, whose investment is in the clarity and freshness of the imagery and an honest portrayal of our craven impulses.” —Aimee Bender, New York Times Book Review

“Taking each story in was like watching a film, half drunk, just the events and images really sticking. Then some time later finding the sensations there, the emotional consequences, fully formed and ingrained somehow in my head . . . These stories hit you like life hits you. ” —Cynan Jones

“I challenge you to point to another writer like McLean. Her vision is brutal, yet hilarious. We will see her everywhere. These tales are so surprisingly original, so strange and moving, so funny, so irreverent, I swallowed them, I ate them whole.” —Deb Olin Unferth

“These stories, they churn and turn with ferocious pace and a brute subject-verb force. McLean is a writer of pure conviction, unafraid of risk, unconcerned with convention, objective but deeply humane, alive to wonder and strangeness. This collection, like her first, is beautiful and harrowing. I’ll say it again and again: Nobody writes like Robin McLean.” —Chris Bachelder

“I loved these brilliant, atmospheric and original stories - Robin McLean is such an exciting writer, and this is her best so far.” —Joanna Kavenna

“Robin McLean has always excelled in narrators who communicate their own self-sufficiency even as they inadvertently reveal the extent to which they’re actually barely holding it together. They live in places where a bed frame and box spring are just a dream. They remind us that they’re still evolving . . . And yet somehow in the face of all of that, her protagonists summon lift, and generate that tenderness necessary to continue. The results are fictions that unite the personal and the political in ways that we need now more than ever.” —Jim Shepard

“Not since Denis Johnson’s Jesus’ Son have I read a book of stories that so resonated in my soul. McLean’s prose sings with a fierceness that is ornate and sparse, spiritual and secular, peaceful and violent. These are stories that remind of Annie Proulx, Joy Williams, and Flannery O’Connor: surprising in the fundamental weirdness of mundane life pressed inextricably into the borderlands. The best collection of stories I have read in years.” —Christian Kiefer

“No writer casts a sharper light on the feral edges of the human condition than Robin McLean. “ —John Larison

“Deeply engaged with the rural, with people on their way off the grid, Robin McLean's fiction is at once fantastical and intensely observed. These are stories about human frailty and darkness, shot through with small moments of glory.." —Brian Evenson

“Where so many American writers balk at genuine human darkness, Robin McLean steps inside with a poet’s eye and an ill-used gavel she swiped from the decaying desk of some corrupt, abusive judge. The results are gripping, chilling, and far too realistic for the term. These ten modern parables lay bare our species’ manifold predicaments here in the dimming light of imagined futures. An unforgettable book.” —Kyle Beachy

“Robin McLean writes with a kind of tender violence, her sentences aimed like fire hoses at a burning world. I loved this collection, and its cast of extraordinary characters will haunt my dreams.” —Dani Shapiro

“Get 'em Young, Treat 'em Tough, Tell 'em Nothing is a series of dispatches straight from the trenches of modern survival, where no one secures the life they were promised yet they fight, flail, and flounder on all the same. Fusing severe wit and our crudest desires into the gritty, tender heart of human tenacity, McLean writes about enduring hope and disillusionment like no one else.” —Josie Smith, Greenlight Bookstore

Praise for Pity the Beast

“Not since Faulkner have I read American prose so bristling with life and particularity.” —J. M. Coetzee

“Pity the Beast is a work of crazy brilliance. It’s a worthy successor to William Faulkner and Toni Morrison, and the rare book that creates more space for later writers to work in.” —Sandra Newman, The Guardian

“I have never read a book that made evil seem so natural—which is both the most unsettling thing about this novel and its greatest accomplishment.” —Sam Sacks, Wall Street Journal

“Pity the Beast is bold, asperous, and defiant.” —Cynan Jones

“Pity the Beast is one of those that takes off the top of your head, both with its cascading verbal brilliance, and the power with which it employs our archetypes of violence, pursuit and survival. It’s as real as a dream in which every impossible thing arrives already known yet glinting with new meaning, like a fire.” —Jonathan Lethem

“With stunning, gothic prose, Pity the Beast is a suspenseful feminist western and story of revenge that oscillates between a broad worldview of civilization, and the minutiae of a harsh environment.” —Two Dollar Radio HQ bookstore

Robin McLean worked as a lawyer and then a potter in the woods of Alaska before turning to writing. Her debut novel Pity the Beast was chosen in multiple Best Books of 2021 lists in outlets such as the Guardian, Wall Street Journal and White Review, while the American Booksellers Association chose it as an Indie Next pick. She teaches writing across the U.S. and internationally, and currently lives in the high desert West.