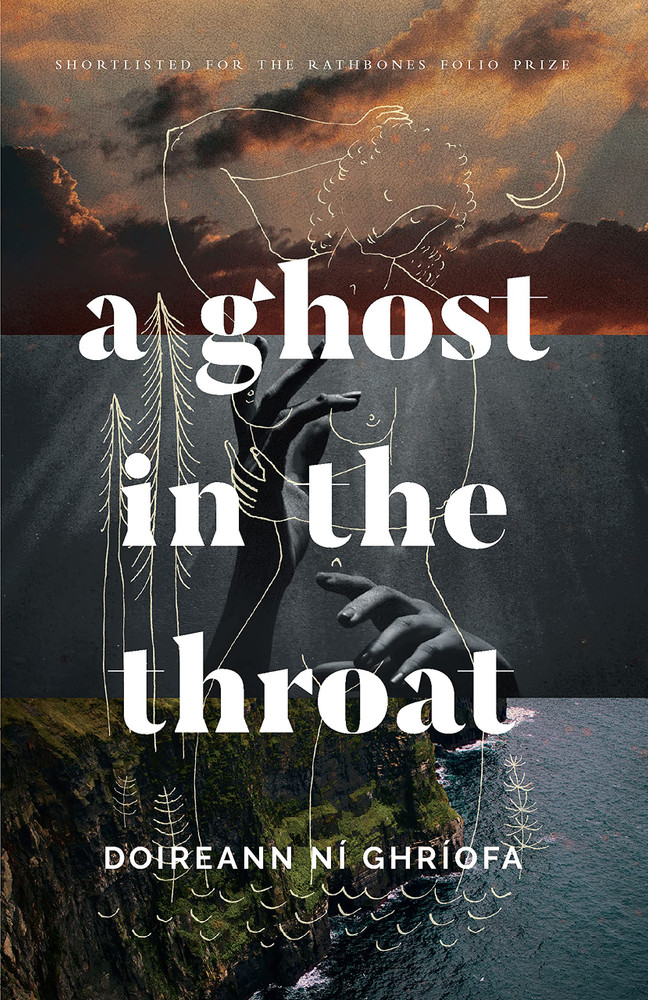 Ghost in the Throat

When we first met, I was a child, and she had been dead for centuries.

On discovering her murdered husband’s body, an eighteenth-century Irish noblewoman drinks handfuls of his blood and composes an extraordinary lament. Eibhlín Dubh Ní Chonaill’s poem travels through the centuries, finding its way to a new mother who has narrowly avoided her own fatal tragedy. When she realizes that the literature dedicated to the poem reduces Eibhlín Dubh’s life to flimsy sketches, she wants more: the details of the poet’s girlhood and old age; her unique rages, joys, sorrows, and desires; the shape of her days and site of her final place of rest. What follows is an adventure in which Doireann Ní Ghríofa sets out to discover Eibhlín Dubh’s erased life―and in doing so, discovers her own.

Moving fluidly between past and present, quest and elegy, poetry and those who make it, A Ghost in the Throat is a shapeshifting book: a record of literary obsession; a narrative about the erasure of a people, of a language, of women; a meditation on motherhood and on translation; and an unforgettable story about finding your voice by freeing another’s.

Praise for A Ghost in the Throat

"The ardent, shape-shifting A Ghost in the Throat is Ní Ghríofa’s offering ... She pieces together Ní Chonaill’s life as if she is darning a hem, keeping the story from unraveling further. She interrupts herself to stuff a child into a car seat, wrestle a duvet into its cover, pick pieces of pasta off the floor ... What is this ecstasy of self-abnegation, what are its costs? She documents this tendency without shame or fear but with curiosity, even amusement ... The real woman Ní Ghríofa summons forth is herself."―Parul Sehgal, New York Times

"A powerful, bewitching blend of memoir and literary investigation … Ní Ghríofa is deeply attuned to the gaps, silences and mysteries in women’s lives, and the book reveals, perhaps above all else, how we absorb what we love―a child, a lover, a poem―and how it changes us from the inside out."―Nina Maclaughlin, New York Times

“A Ghost in the Throat moves between past and present with hallucinogenic intensity as the narrator uncovers the details of the dead woman's life, each revelation deepening her own sense of herself as a writer and a woman and creating in the process a brave and beautiful work of art.”―Republic of Consciousness Prize

"A thrilling voyage into the lore of Ireland, motherhood, marriage, blood, and guts ... This is both a page-turner and a raw but erudite expression of a totally unique consciousness."―Molly Young, New York Magazine

“A Ghost in the Throat is something strange and very special: a ravishingly immersive telling of the way in which a poet and mother's obsession with a poet and mother who died centuries ago makes their different lives chime like bells.”―Emma Donoghue

"A fascinating hybrid work in which the voices of two Irish female poets ring out across centuries. 'When we first met, I was a child, and she had been dead for centuries,' writes Ní Ghríofa in her first work of prose―and what a debut it is. Earning well-deserved accolades abroad, the book merges memoir, history, biography, autofiction, and literary analysis... Lyrical prose passages and moving introspection abound in this unique and beautiful book."―Kirkus (starred review)

"Ní Ghríofa is a poet through and through: in this prose work she writes lyrical sentences that make the physical world come alive ... It was around Ní Chonaill’s time that a new poetic form was invented: the aisling, a dream vision of Ireland revealing itself to the poet as a beautiful woman in need of saving. Ní Ghríofa certainly gives us a new, feminist vision of a woman saving another woman, righting a historical imbalance that persists in women’s continued sacrifices."―New York Review of Books

"History mutes women; it also depends on them. This paradox is at the heart of a A Ghost in the Throat, an extraordinary literary memoir that finds life in buried spaces ... Feminist and feminine, A Ghost in the Throat gives defiant voice to hushed womanhood, in all of its pain and glory. Her images incandescent and brutal, Ní Ghríofa writes about the omens represented by starlings and about unearthed fragments of teacups, but also about caesarean scars, bleeding hangnails, and the consuming fire of her husband’s touch ... A Ghost in the Throat is an achingly gorgeous literary exploration that establishes a sisterhood across generations."―Foreword Reviews (starred review)

"One of the best books of this dreadful year ... Billed as a genre-busting blend of ‘autofiction, essay, scholarship, sleuthing and literary translation’, the book is an extraordinary feat of ventriloquism delivered in a lush, lyrical prose that dazzles readers from the get-go ... When you write like this there is almost nothing a writer cannot get away with."―Sunday Times

“Past versus present, blood versus milk, birth versus death, the Irish language versus the English: dichotomies abound, but the questions of women’s lived experiences and who history remembers link them all.”―Paris Review

"Beautifully bewitching ... A Ghost in the Throat is a female―and feminist―text in its protest against the historical and cultural erasure of women like Eibhlín Dubh ... In this extraordinary book Ní Ghríofa reclaims Dubh for posterity, reanimating her in the face of a centuries-long historiography that persistently shuts-out so very many vital female texts."―Lit Hub

"A book like this comes along once every few years and obliterates every clear definition of genre and form. I mean no exaggeration here: A Ghost in the Throat is astounding and utterly fresh."―Irish Independent

"With luminous language and candid details, this book shimmers with honesty and scholarship. A truly original read."―Sunday Independent

“Working from Eibhlín Dubh’s famous poem, 'Caoineadh Airt Uí Laoghaire', and her own research, the author manages to get closer to this historic woman than any other person has ever done before … Her account is so vivid that we are almost there, with the pregnant Eibhlín Dubh on horseback, when she comes upon the body of her murdered husband and is so overcome with grief that she scoops up his blood and drinks it.”―Clodagh Finn

“I wish to shout because this book is so profoundly beautiful and so beautifully profound―a female text with so much to say about the ways we serve others (our families, our homes, our obsessions) and the ways that serving shapes us, and how being alone is never being alone, and how imagination always leaves us a few truths short, but it is what we have, it is the best we can do, it may even be the best of us. Imagination yields. It has given us the genuine miracle of A Ghost in the Throat.”―Cleaver Magazine