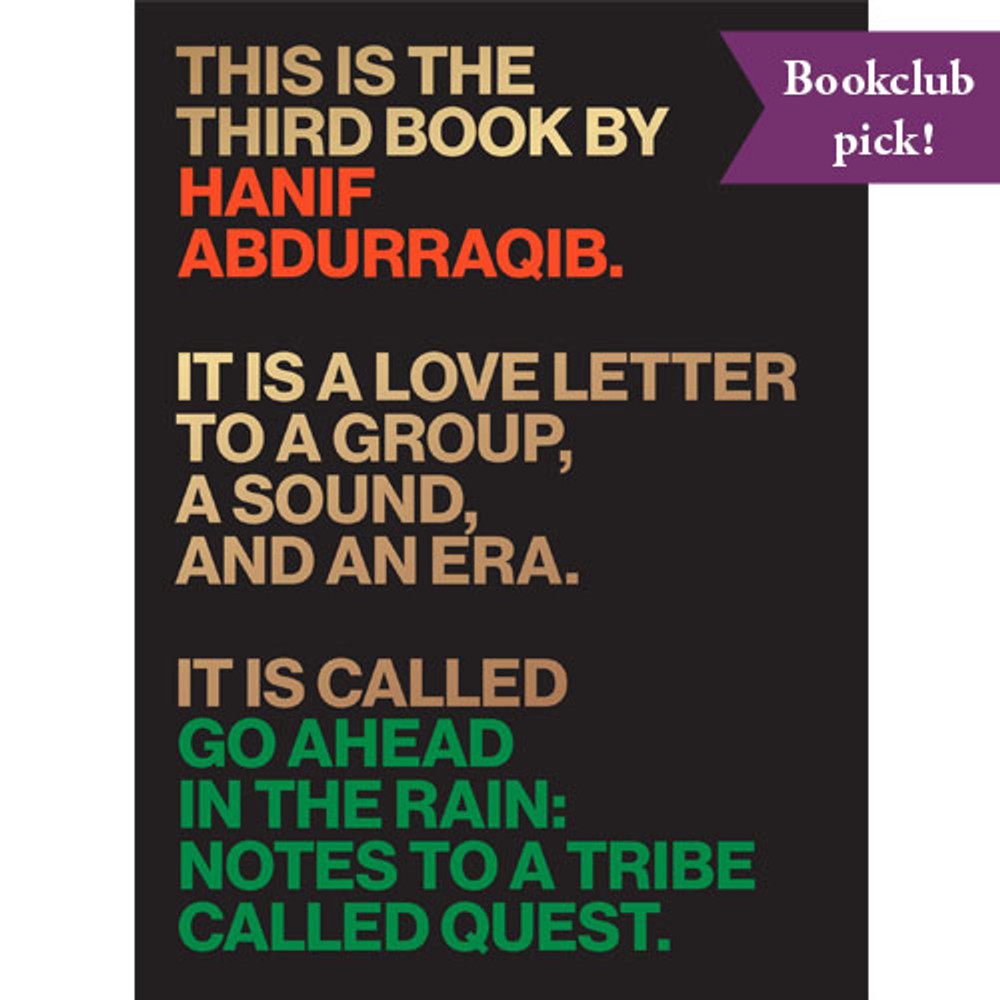 Go Ahead in the Rain

This title is theMarch 2019 pick for the THE BUILD BOOKCLUB! Find out more here.

How does one pay homage to A Tribe Called Quest? The seminal rap group brought jazz into the genre, resurrecting timeless rhythms to create masterpieces such as The Low End Theory and Midnight Marauders. Seventeen years after their last album, they resurrected themselves with an intense, socially conscious record, We Got It from Here . . . Thank You 4 Your Service, which arrived when fans needed it most, in the aftermath of the 2016 election. Poet and essayist Hanif Abdurraqib digs into the group’s history and draws from his own experience to reflect on how its distinctive sound resonated among fans like himself. The result is as ambitious and genre-bending as the rap group itself.

Abdurraqib traces the Tribe's creative career, from their early days as part of the Afrocentric rap collective known as the Native Tongues, through their first three classic albums, to their eventual breakup and long hiatus. Their work is placed in the context of the broader rap landscape of the 1990s, one upended by sampling laws that forced a reinvention in production methods, the East Coast–West Coast rivalry that threatened to destroy the genre, and some record labels’ shift from focusing on groups to individual MCs. Throughout the narrative Abdurraqib connects the music and cultural history to their street-level impact. Whether he’s remembering The Source magazine cover announcing the Tribe’s 1998 breakup or writing personal letters to the group after bandmate Phife Dawg’s death, Abdurraqib seeks the deeper truths of A Tribe Called Quest; truths that—like the low end, the bass—are not simply heard in the head, but felt in the chest.

"Abdurraqib's book doesn't attempt an arm's length, scholarly approach to analyzing the group and its music; instead, Abdurraqib speaks from his own experiences, often in the form of questioning or appreciative open letters to members of the band. It's a bold conceit, but if the book loses a bit of reserved objectivity in the process, it gains much more: an emotional grounding for why the group was so important to the author, and, by extension, why their music should matter to readers, too." (Foreword Reviews 2018-11-08)

"Even those who know little about the music will learn much of significance here, perhaps learning how to love it in the process." (Kirkus, Starred Review 2019-12-09)

"Go Ahead in the Rain is more than just an homage to A Tribe Called Quest…it's more like a reckoning. The result is a critical examination of the group—their message and history—as well as a musical memoir of sorts, and an exploration of the lasting impact music can have on the soul." (Vanity Fair 2018-12-20)

"Abdurraqib explores and exposes the power of music, of art, to not just connect with people, but to connect people, to make movements, to inspire change and revolution, on levels both large and small. In powerful, poetic language, Abdurraqib makes clear the legacy of ATCQ, both the one the group called upon for their own creation and the one they left behind." (Nylon 2019-01-02)

"Go Ahead in the Rain is an accurate, honest documentation of the band, their music, and the time…Brilliantly entertaining, informative, and self-reflective. This is essential reading." (February Indie Next List 2019-01-02)

"[Abdurraqib] allows us into his own history alongside the groundbreaking group, blending personal, musical, and cultural insights into something that truly resonates. " (Buzzfeed News 2019-01-04)

"The book comes to life when [Abdurraqib] speaks from his own experiences…Although Go Ahead in the Rain is a no-brainer for devoted hip-hop heads (even those who think they've read all there is to know about the group), Abdurraqib's poetic homage to ATCQ (and hip-hop in general) will captivate casual music fans as well." (Booklist, Starred Review 2019-01-08)

Hanif Abdurraqib is a poet, essayist, and cultural critic from Columbus, Ohio. His poetry has been published in Muzzle, Vinyl, PEN American, and various other journals. His essays and music criticism have been published in The FADER, Pitchfork, The New Yorker, and The New York Times. His first full length poetry collection, The Crown Ain't Worth Much, was released in June 2016 from Button Poetry. It was named a finalist for the Eric Hoffer Book Prize, and was nominated for a Hurston-Wright Legacy Award. With Big Lucks, he released a limited edition chapbook, Vintage Sadness, in summer 2017. His first collection of essays, They Can't Kill Us Until They Kill Us, was released in winter 2017 by Two Dollar Radio and was named a book of the year by Buzzfeed, Esquire, NPR, Oprah Magazine, Paste, CBC, The Los Angeles Review, Pitchfork, and The Chicago Tribune, among others. He is a Callaloo Creative Writing Fellow, an interviewer at Union Station Magazine, and a poetry editor at Muzzle Magazine. He is a member of the poetry collective Echo Hotel with poet/essayist Eve Ewing.

His next books are Go Ahead In The Rain, a biography of A Tribe Called Quest due out in 2019 by University of Texas Press, and They Don't Dance No' Mo', due out in 2020 by Random House.

Rain: And Other Stories

Standing on the Verge and Maggot Brain