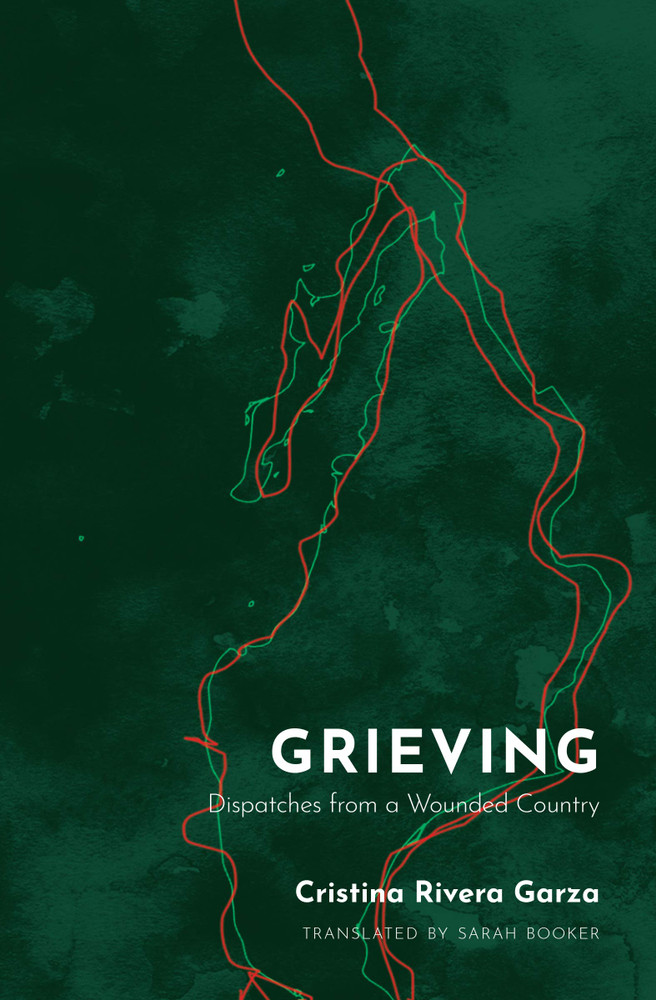 Grieving: Dispatches from a Wounded Country

By one of Mexico's greatest contemporary writers, this investigation into state violence and mourning weaves together personal essay and literary theory, giving voice to the political experience of collective pain.

Grieving is a hybrid collection of short crónicas, journalism, and personal essays on systemic violence in contemporary Mexico and along the US-Mexico border. Drawing together literary theory and historical analysis, she outlines how neoliberalism, corruption, and drug trafficking—culminating in the misnamed “war on drugs”—has shaped her country. Working from and against this political context, Cristina Rivera Garza posits that collective grief is an act of resistance against state violence, and that writing is a powerful mode of seeking social justice and embodying resilience.

She states: “As we write, as we work with language—the humblest and most powerful force available to us—we activate the potential of words, phrases, sentences. Writing as we grieve, grieving as we write: a practice able to create refuge from the open. Writing with others. Grieving like someone who takes refuge from the open. Grieving, which is always a radically different mode of writing.”

“A lucid, poignant collection of essays and poetry. . . . deeply hopeful, ultimately love letters to writing itself, and to the power of language to overcome the silence that impunity imposes.” —New York Times Book Review

"A compelling work of social criticism that speaks to a desperate time." —Kirkus Reviews

“Finally this urgent manifesto on how we gaze upon trauma is available in translation. Cristina Rivera Garza’s Grieving was an early major reckoning with violence in contemporary Mexico, but its relevance, like the causes of the crisis, extends far beyond the border. Like one of its forebears, Susan Sontag’s Regarding the Pain of Others, it approaches violence not as mere intellectual exercise but with great ethical care. This book demands readers reassess their relationship to survivors, to those who remain vulnerable, and to the 'Visceraless State' that abets violence if not performing it outright. A brilliant work that traces a path toward healing for bodies exposed to the many violences of our world today.” —Rubén Martínez, author of Desert America: A Journey through Our Most Divided Landscape

“Cristina Rivera Garza is a writer of startling luminosity. In Grieving, she shows the light to be found in acts of collective mourning, and how art can be part of the process of grieving together, of understanding with new complexity the forces driving the devastating violence on the US-Mexican border and within Mexico. Sarah Booker’s translation recreates the urgency of Rivera Garza’s prose with exceptional vitality.” —Idra Novey, author of Those Who Knew

“A bold and brilliant return to the thorny questions of our ongoing state of violence. Should we remain speechless? Should we share our pain? What is to be learned in the journey into horror? When does sorrow become a political instrument of dissent? Mexico’s most impressive essayist and writer, Cristina Rivera Garza chooses not to speak alone or in the name of others but with all those who grieve with her.” —Lina Meruane, author of Seeing Red

"Cristina Rivera Garza writes, about one of many ostentatious displays of murder in Mexico, that 'the very reason acts like these are carried out is so that we are rendered speechless.' But Rivera Garza forcefully resists such silencing, not with a wail or plaintive lament, but in a deliberate, careful, deeply empathetic act of literary grace and aplomb. Grieving is at once a gorgeous elegy, a clarion call to action, and a revindication of the human spirit. Rivera Garza's prose, and her political celebration of the written word, is liberatory." —John Washington, author of The Dispossessed: A Story of Asylum and the US-Mexican Border and Beyond

“Rivera Garza’s Grieving documents and shares a writer’s struggle to face the horror enveloping her country, and the world, with every possible tool and weapon of both language and feeling. The result is a vital and burning work of social grieving; that is, of fighting back, of not giving up or giving in, of commitment and survival.” —John Gibler, author of I Couldn’t Even Imagine That They Would Kill Us: An Oral History of the Attacks Against the Students of Ayotzinapa

“In writing about Mexican violence, misogyny, natural disasters, pandemics, art and literature, resistance, about Mexican women, US Latinx, and about herself, Cristina Rivera Garza writes about the universal conditions of our world today. She does so with prose unmatched for its sharp intelligence, poetry, clarity, empathy, liveliness, passion. She is a genius, ‘our’ necessary voice.” —Francisco Goldman, author of The Interior Circuit: A Mexico City Chronicle

“Laying bare the foundations of state violence and collective trauma while also imploring its readers to ‘imagine the impossible, the world we want to live in,’ Grieving asks, ‘Can writing keep us company—we, the broken ones still alive with rage and hope?’ Arriving, as this translation does, amid masks and distancing—but also in the throes of a great unmasking of horrors and complicities—I affirm, with Cristina Rivera Garza, that yes, sin duda, ‘I believe writing can. At the very least, writing should.’ Grieving: Dispatches from a Wounded Country is the perfect book to accompany us through these uncertain times.” —Rosa Alcalá, author of MyOTHER Tongue

Cristina Rivera Garza is an award-winning writer, poet, translator, and critic. She is the recipient of the Roger Caillois and Anna Seghers Prizes, and the only two-time winner of the Sor Juana Inés de la Cruz Prize. She is currently distinguished professor of Hispanic studies at the University of Houston.

Sarah Booker is a translator and doctoral candidate at the University of North Carolina at Chapel Hill, where she focuses on contemporary Latin American literature and translation studies. Her translations have appeared in the Paris Review, Asymptote, and the Brooklyn Rail, among others.

Hemp Bound: Dispatches from the Front Lines of the Next Agricultural Revolution