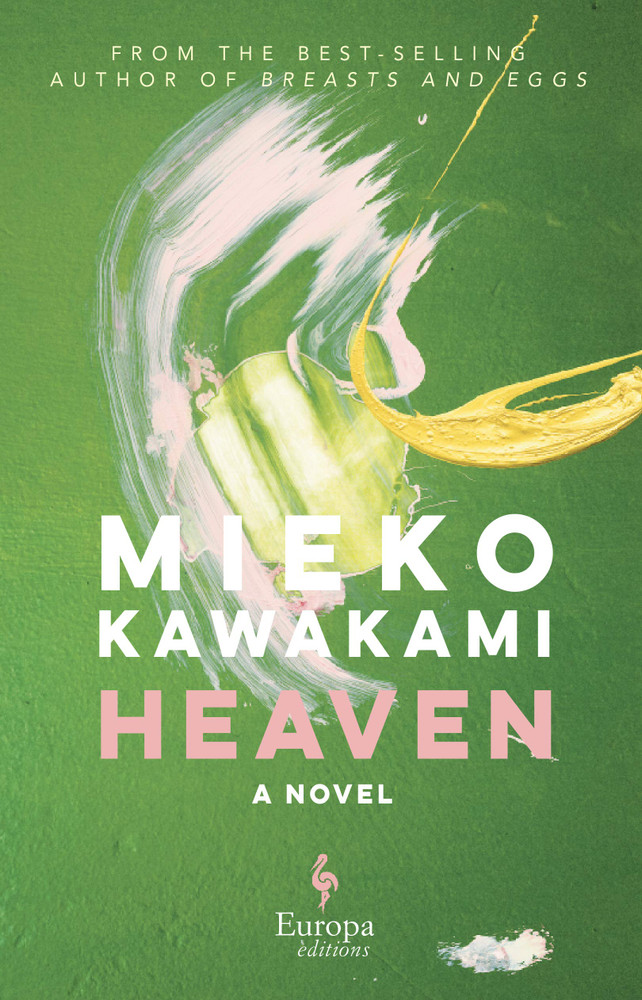 From the bestselling author of Breasts and Eggs and international literary sensation Mieko Kawakami, a sharp and illuminating novel about the impact of violence and the power of solidarity.

A bold foray into new literary territory, Kawakami’s novel is told in the voice of a 14-year-old student subjected to relentless torment for having a lazy eye. Instead of resisting, the boy chooses to suffer in complete resignation. The only person who understands what he is going through is a female classmate who suffers similar treatment at the hands of her tormentors.

These raw and realistic portrayals of bullying are counterbalanced by textured exposition of the philosophical and religious debates concerning violence to which the weak are subjected.

Heaven stands as a dazzling testament to Kawakami’s literary talent. There can be little doubt that it has cemented her reputation as one of today’s most important young authors working to expand the boundaries of contemporary Japanese literature.

“Impeccably translated by Sam Bett and David Boyd, the book is full of masterly set pieces of violence, scenes of senseless bullying so lucid you can almost feel the pain yourself... The dissonances of the novel align into perfect vision for the breathtaking ending, which is an argument in favor of meaning, of beauty, of life.”—Nadja Spiegelman, The New York Times Book Review

“If you enjoyed Meiko Kawakami’s brilliant Breasts and Eggs, you’re certain to be astonished by her latest novel exploring violence and bullying with fierce, feminist and damning candor.”—Ms. Magazine

“This is the real magic of Heaven, which shows us how to think about morality as an ongoing, dramatic activity. It can be maddening and ruinous and isolating. But it can also be shared, enlivened through writing and conversation, and momentarily redeemed through unheroic acts of solidarity.”—Merve Emre, The New Yorker

“Heaven takes on the issue of bullying, and why a victim might choose not to fight back. Two teenagers bond over their torment, and their passive response reveals many kinds of societal injustice.”—The Washington Post

“A raw, painful, and tender portrait of adolescent misery...This book is very likely to make you cry.”—Lily Meyer, NPR

“Japan’s Mieko Kawakami, a rising young star in the literary scene, returns with a raw story of bullying and pain, but also friendship.”—Lesley Kennedy, CNN Underscored

★ “Kawakami unflinchingly takes the reader through the abyss of depraved, dehumanizing behavior with keen psychological insight, brilliant sensitivity, and compassionate understanding. With this, the author’s star continues to rise.”—Publishers Weekly (Starred Review)

★ “The author of Breasts and Eggs takes on another subject seldom tapped in literary fiction and blows it open with raw and eloquent intensity...An unexpected classic.”—Kirkus Reviews (Starred Review)

“Kawakami writes with jagged, visceral beauty about those early antagonists we carry around in our heads, scars we bear into adulthood, ‘caught in the undertow’ of hormones and sorrow.”—Oprah Daily

“One of Japan’s brightest stars is set to explode across the global skies of literature.”—Japan Times

“While Kawakami refuses to give us answers, the elegance and care with which she describes her characters’ lives invite the reader to ask such questions of themselves. This is not a cruel story, but rather one that understands hurt and pain for what it is: universal, unjust and material for new life.”—Bookpage

“Mesmerizing...Kawakami is a master of the interior voice. There is something about her prose that is so immediate and pressing it blocks out the future almost as if it were a threatening force. We are forced to deal with her characters as they are living now: alone, vulnerable, and unprotected.”—World Literature Today

“With grace and clarity, Kawakami explores destructive nature of adolescent violence, and the power of empathetic friendships.”—The Millions

“Anyone who has suffered the torment of peer bullying will see themselves in Eyes and Hazmat’s story.”—Bustle

“This sharp new novel from Mieko Kawakami [is] a sucker-punch of a story that implores you to question even your own morality.”—Cosmopolitan (UK)

“I loved this book. Its portrayal of bullying is moving and intelligent. Kawakami gives us characters who speak to the heart and illustrate in one form or another the dilemma facing everyone in adolescence. Hopeful yet chilling in equal measures.”—Don Luckham, American Booksellers Association

“Heaven is told with astonishing frankness and economy. It will cut through all your defences down to every layer of fear, isolation, hope and need you’ve ever felt. The central pair of fourteen year old outcasts reckon with pain, belonging and the search for meaning in a way that’s heartbreaking and compelling. Mieko Kawakami is a genius.”—Naoise Dolan, author of Exciting Times

“Taking two outcast teens as its unhappy protagonists, Heaven is an expertly told, deeply unsettling tale of adolescent violence that will, no doubt, only grow the author’s fan base.”—Vogue (UK)

“Kawakami is a writer who doesn’t shy away from hard truths and painful experiences, so Heaven will not be an easy read, but it’s guaranteed to be a rewarding one.”—The Japan Times

“With a philosophical edge, Kawakami’s dialogue delves into the definition of power and nature of child friendships. The result is another spine-tinglingly real novel that will weigh heavy on your heart long after its finish.”—Osusume Books

“The questions Heaven poses about identity, friendship, and trauma are resonant ones, making this a compelling read for those willing to venture into emotionally raw territory.”—Words Without Borders

“Both tracts that Kawakami treads—the well-crafted narrative as well as the aspirational philosophizing—deserve exploration, particularly by such a skilled author.”—Minneapolis Star-Tribune

Mieko Kawakami is the author of the internationally best-selling novel, Breasts and Eggs, a New York Times Notable Book of the Year and one of TIME’s Best 10 Books of 2020. Born in Osaka, Kawakami made her literary debut as a poet in 2006, and published her first novella, My Ego, My Teeth, and the World, in 2007. Her writing is known for its poetic qualities and its insights into the female body, ethical questions, and the dilemmas of modern society. Her books have been translated into many languages and are available all over the world. She has received numerous prestigious literary awards in Japan, including the Akutagawa Prize, the Tanizaki Prize, and the Murasaki Shikibu Prize. Kawakami lives in Tokyo, Japan.

Sam Bett studied Japanese at UMass Amherst and Kwansei Gakuin University. Awarded Grand Prize in the 2016 JLPP International Translation Competition, he has translated fiction by Yoko Ogawa, Yukio Mishima, and NisiOisin. He also co-hosts Us&Them, a Brooklyn-based reading series showcasing the work of writers who translate. His translation of Yukio Mishima’s Star (New Directions, 2019) won the 2019 Japan-U.S. Friendship Commission (JUSFC) Prize for the Translation of Japanese Literature. Together with David Boyd, he is the translator of Kawakami’s Breasts and Eggs.

David Boyd is Assistant Professor of Japanese at the University of North Carolina at Charlotte. He has translated novels and stories by Hiroko Oyamada, Masatsugu Ono and Toh EnJoe, among others. His translation of Hideo Furukawa’s Slow Boat (Pushkin Press, 2017) won the 2017/2018 Japan-U.S. Friendship Commission (JUSFC) Prize for the Translation of Japanese Literature. Together with Sam Bett, he is the translator of Kawakami’s Breasts and Eggs.

Under the Banner of Heaven: A Story of Violent Faith