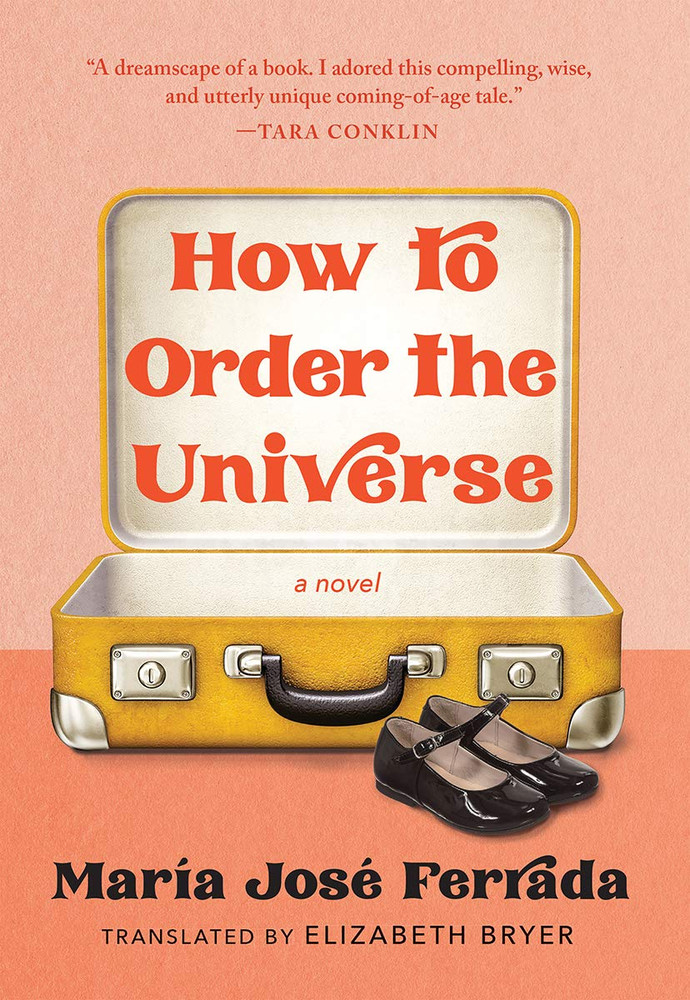 How to Order the Universe

“A dreamscape of a book. I adored this compelling, wise, and utterly unique coming-of-age tale.” ―Tara Conklin

For seven-year-old M, the world is guided by a firm set of principles, based on her father D’s life as a traveling salesman. Enchanted by her father’s trade, M convinces him to take her along on his routes, selling hardware supplies against the backdrop of Pinochet-era Chile. As father and daughter trek from town to town in their old Renault, M’s memories and thoughts become tied to a language of rural commerce, philosophy, the cosmos, hardware products, and ghosts. M, in her innocence, barely notices the rising tensions and precarious nature of their work until she and her father connect with an enigmatic photographer, E, whose presence threatens to upend the unusual life they’ve created.

María José Ferrada expertly captures a vanishing way of life and a father-daughter relationship on the brink of irreversible change. At once nostalgic, dangerous, sharply funny, and full of delight and wonder, How to Order the Universe is a richly imaginative debut and a rare work of magic and originality.

"María José Ferrada examines the Pinochet regime through the eyes of a traveling 7-year-old in How to Order the Universe. Traveling salesman D is his daughter, M's, whole world. But readers will catch the subtle shifts taking place around them in Chile, even if the novel's young protagonist does not."
― Bustle

"Charming. . . . Fans of The Elegance of the Hedgehog will want to make time for this one."
― The Chicago Review of Books

"A tale that captures a child’s perspective on a world created and disrupted by adults."
― The Christian Science Monitor

"I was so delighted with it. . . . It's one of these novels in translation that you can read in a sitting or extend it out in a way that’s really lovely."
― So Many Damn Books podcast

"This quick and quirky book is as charming as it is unsettling, as appealing as it is wise."
― Kirkus, Starred Review

"A moving tribute to childhood, Ferrada’s novel is an enthralling tale of resilience, deception, and trauma during a dark time in Chile’s history."
― Publishers Weekly

"A debut as haunting as it is charming, a study in contrast between the simplicity of childhood and the heaviness of adulthood. Readers will fly through this slim novel, which is perfect for discussion."
― Booklist

"Through a child's clever but innocent point of view, this inventive debut novel considers family, hope and the harsher realities of 1980s Chile."
― Shelf Awareness

"A Paper Moon-esque story set in Pinochet-era Chile. . . .  A really bittersweet story of a girl’s love for her dad and the things in life that even the most intelligent children don’t understand when they are young."
― Book Riot

María José Ferrada’s children’s books have been published all over the world. How to Order the Universe has been or is being translated into Italian, Brazilian Portuguese, Danish, and German, and is also being published all over the Spanish-speaking world. Ferrada has been awarded numerous prizes, such as the City of Orihuela de Poesía, Premio Hispanoamericano de Poesía para Ninos, the Academia Award for the best book published in Chile, and the Santiago Municipal Literature Award, and is a three-time winner of the Chilean Ministry of Culture Award. She lives in Santiago, Chile.

Elizabeth Bryer is a translator and writer from Australia. Her translations include Claudia Salazar Jiménez’s Americas Prize–winning Blood of the Dawn; Aleksandra Lun’s The Palimpsests, for which she was awarded a PEN/Heim Translation Fund grant; and José Luis de Juan’s Napoleon’s Beekeeper. Her debut novel, From Here On, Monsters, is out now through Picador.