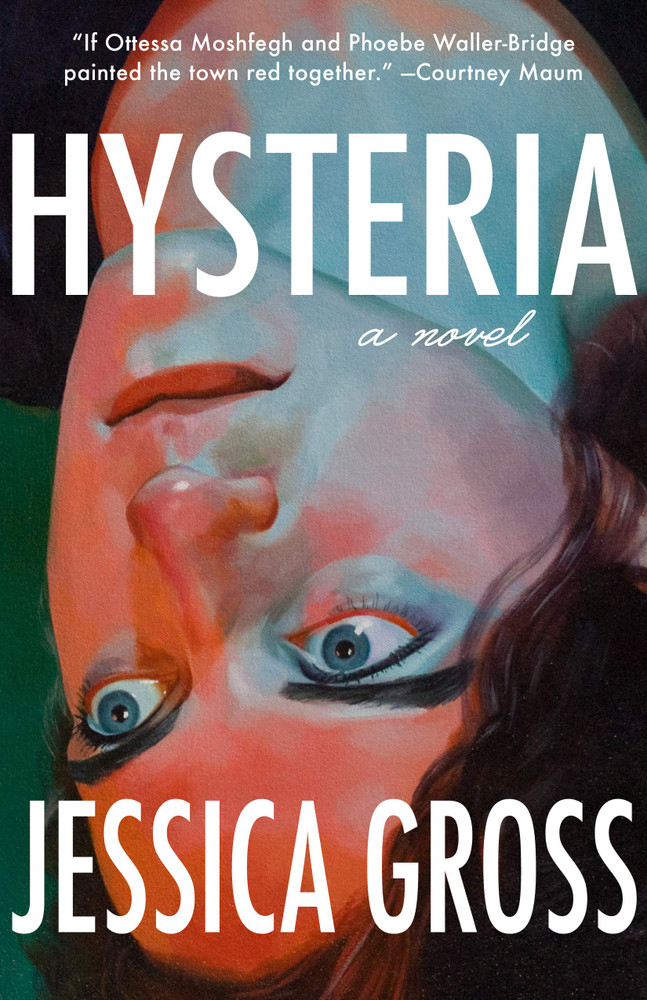 In HYSTERIA, we meet a young woman an hour into yet another alcohol-fueled, masochistic, sexual bender at her local bar. There is a new bartender working this time, one she hasn't seen before, but who can properly make a drink. He looks familiar, and as she is consumed by shame from her behavior the previous week― hooking up with her parents' colleague and her roommate's brother― she also becomes convinced that her Brooklyn bartender is actually Sigmund Freud. They embark on a relationship, and she is forced to confront her past through the prism of their complex, revealing, and sometimes shocking meetings. With the help of Freud―or whoever he is―she begins to untangle her Oedipal leanings, her upbringing, and her desires. Jessica Gross's debut is unflinchingly perceptive and honest, darkly funny, and unafraid of mining the deepest fears of contemporary lives.

At first, Hysteria feels like another entry in the canon of recent novels about self-destructive, masochistic young women―but soon things start to shift, as our extremely lustful, extremely self-hating heroine meets a man at a bar and... decides he is Sigmund Freud. Which, twist. After that, the novel only gets weirder, and only goes deeper, the centerpiece a half-real, half-fantasy recollection of the narrator’s first orgasm, and in the end, the whole thing feels like an R-rated, modern version of Clarice Lispector’s insane, intense The Passion According to G. H. If you’re into that kind of thing." ―Emily Temple, Lit Hub

"Hysteria is unafraid to plumb the complex depths of our most compulsive behavior. Lest you think it's just all pitch-black sexual drama, let me also reassure you that it's very funny ― the bartender with whom the narrator works out some of her issues with is dubbed Freud, and, really, what's funnier than that?" ―Kristin Iversen, Refinery29

"Trippy and hypnotic... a riveting novel that won't you let you look away." ―Kirkus Reviews

"Gross’s aptitude for shocking yet highly sensory prose propels the reader along the protagonist’s bender, all the way to rock bottom. The narrator’s perfectly rendered inner monologue, replete with her nuanced urges and obsessions, will make readers wonder if they’re getting to know her better than she knows herself, and Gross succeeds in capturing the complexities of sex addiction. It is every bit a page-turner as it is a descent into sexual madness."―Publishers Weekly

"Hysteria ― like Fleabag, like Michaela Coel’s I May Destroy You ― is a wild ride. But if the narrator is out of control, not so the author. Gross’s debut is confident, sure-handed, fast-paced, entertaining ― and also profound." ―Dinah Lenney, Los Angeles Review of Books

"Hysteria tells the truth about the counterintuitive logic of desire and daughterhood as its perfectly flawed heroine tries to obliterate herself one Daddy at a time. So intimate I felt like I was eavesdropping, a debut that is from page one as compelling and breathless as the sex bender it details. A lusty feat. Hysteria is a thrilling, sexy tear." ―Marie-Helene Bertino, author of Parakeet

Jessica Gross's writing has appeared in The Los Angeles Review of Books, The New York Times Magazine, and The Paris Review Daily, among other places. She holds an MFA in fiction from The New School, a Master's degree in cultural reporting and criticism from New York University and a Bachelor's in anthropology from Princeton University. She has received fellowships in fiction from the Yiddish Book Center (2017) and the 14th Street Y (2015-16), where she also served as editor of the LABA Journal. She currently teaches writing at Eugene Lang College at The New School. Hysteria is her first novel.