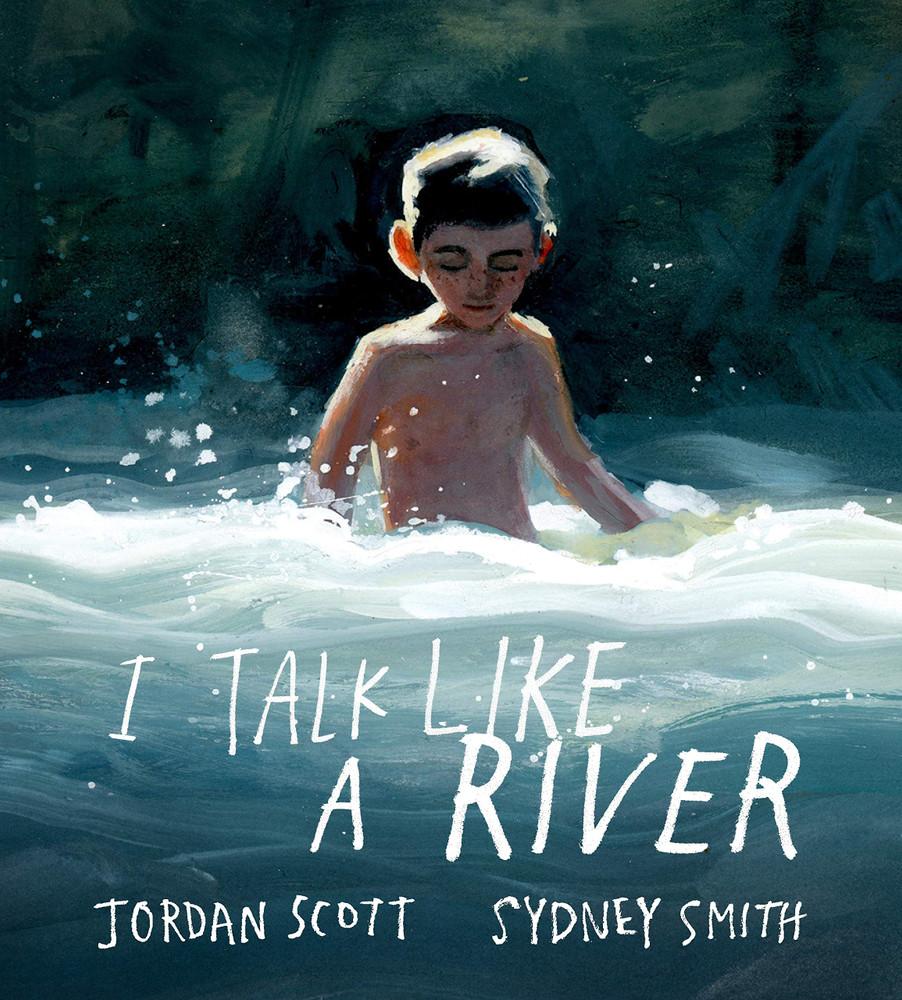 What if words got stuck in the back of your mouth whenever you tried to speak? What if they never came out the way you wanted them to? Sometimes it takes a change of perspective to get the words flowing.

I wake up each morning with the sounds of words all around me.

When a boy who stutters feels isolated, alone, and incapable of communicating in the way he'd like, it takes a kindly father and a walk by the river to help him find his voice. Compassionate parents everywhere will instantly recognize a father's ability to reconnect a child with the world around him.

Poet Jordan Scott writes movingly in this powerful and ultimately uplifting book, based on his own experience, and masterfully illustrated by Greenaway Medalist Sydney Smith. A book for any child who feels lost, lonely, or unable to fit in.

"an empathetic conversation-starter for families seeking help for a young — or not so young — person who stutters."—The New York Times

"This wrenching and beautiful book will give succor to children who stutter and expand the hearts of those lucky enough to take fluency for granted." —The Wall Street Journal

"This important (and stunning) book promotes self-acceptance . . . as well as empathy" —The San Francisco Chronicle

"One of the most powerful books that I’ve read in 2020."—The Globe and Mail

★ "This is unquestionably one of the best picture books of 2020." —Book Page, Starred Review

★ "An astounding articulation of both what it feels like to be different and how to make peace with it."—Kirkus Reviews, Starred Review

★ "By turns heartbreaking and illuminating, this picture book brings one more outsider into the fold through economy of language and an abundance of love."—School Library Journal, Starred Review

★ "Full of reassurance and understanding, this is a much needed look at a common language problem." —Booklist, Starred Review

★"a boy who stutters is given a new way to think about his speech. . . . Artwork makes the internal change a light-filled experience"—Publishers Weekly, Starred Review

★ "In this moving, deeply personal . . . There is plenty for all readers to glean from this boy's 'proud river.'"—Shelf Awareness, Starred Review

★ " Smith’s watercolour imagery in the book’s early parts is soft and edgeless. . . . . It’s only when his dad takes him for a walk along the river that the art firms up. The pair are now framed by the darkly delineated silhouette of tree trunks while the crisp, subtle hues of autumn leaves are reflected in the water next to them."—Quill & Quire, Starred Review

"Deft poetic language pairs with the resonant watercolors of Sydney Smith to create a book that is more than a memoir and more than conveying a message. This is pain, turned into art, and written for young children. Incomparable."—A Fuse #8 Production

"a sensitive portrayal of the isolation and stigma felt by a kid with speech difficulties." —Bulletin of the Center for Children’s Books

"Jordan Scott pulls from his own childhood experience to explore the way his father helped him accept his stutter and offers support for anyone who is differently abled."—BC BookLook

"From its sunlit, breathtaking cover illustration of a freckled boy immersed in a moving river to the lyrical text by a B.C. poet drawing on his childhood experiences growing up with a stutter, this is a book for all ages."—Montreal Gazette

"This is a stunning picture book."—Sal's Fiction Addiction

"Poet Jordan Scott gives us an empathetic picture book from the perspective of a boy who stutters.  . . . Sydney Smith's flowing images explain and enhance the text."—BookLoons

Jordan Scott is a poet whose work includes Silt, Blert, DECOMP, and Night & Ox. Blert, which explores the poetics of stuttering, is the subject of two National Film Board of Canada projects, Flub and Utter: a poetic memoir of the mouth and STUTTER. Scott was the recipient of the 2018 Latner Writers' Trust Poetry Prize for his contributions to Canadian poetry. I Talk Like a River is Scott's first book for children. He lives in the Comox Valley on Vancouver Island with his wife and two sons.

Sydney Smith is an illustrator of picture books whose work includes Sidewalk Flowers by JonArno Lawson; The White Cat and the Monk by Jo Ellen Bogart; and Town Is by the Sea by Joanne Schwartz, which was awarded the 2018 Kate Greenaway Medal and the 2018 Children's Literature Award. He both wrote and illustrated Small in the City, which Kirkus Reviews called "Extraordinary, emotional, and beautifully rendered." in a starred review. School Library Journal said "The use of line, reflection, and perspective masterfully evoke a bustling gray city." in another starred review. Travis Jonker of 100 Scope Notes, a School Library Journal blog, said "Small in the City is one of my favorite books of 2019." His accolades include two Governor General's Awards for Illustrated Children's Books and four successive New York Times Best Illustrated Children's Book of the Year citations.

Things We Didn't Talk About When I Was a Girl - paperback