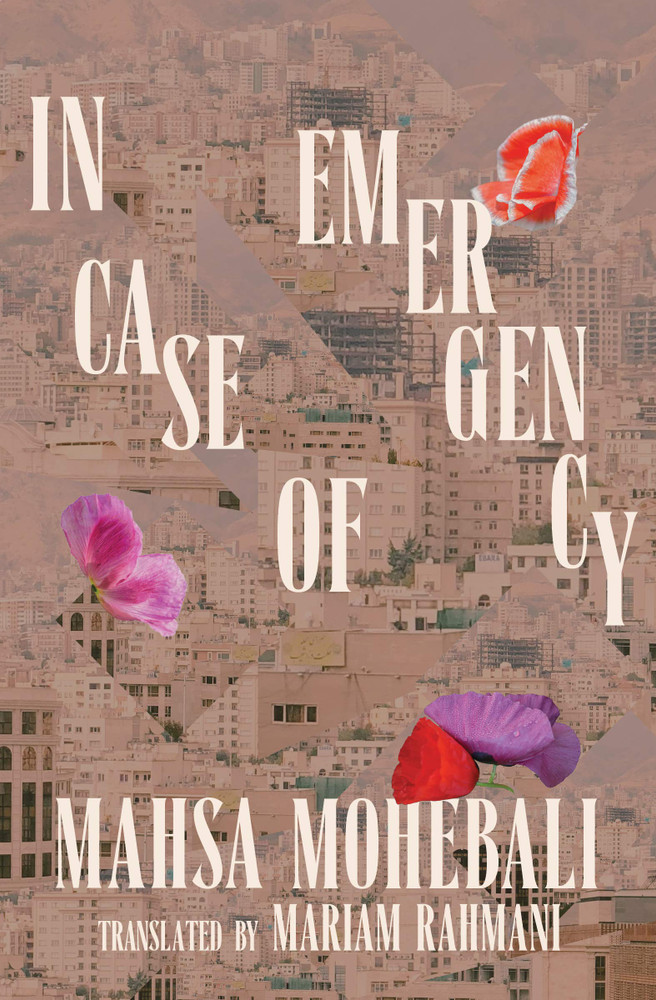 In Case of Emergency

In this prize-winning Iranian novel, a spoiled and foul-mouthed young woman looks to get high while her family and city fall to pieces.

What do you do when the world is falling apart and you’re in withdrawal?

Disillusioned, wealthy, and addicted to opium, Shadi wakes up one day to apocalyptic earthquakes and a dangerously low stash. Outside, Tehran is crumbling: yuppies flee in bumper-to-bumper traffic as skaters and pretty boys rise up to claim the city as theirs. Cross-dressed to evade hijab laws, Shadi flits between her dysfunctional family and depressed friends—all in search of her next fix.

Mahsa Mohebali's groundbreaking novel about Iranian counterculture is a satirical portrait of the disaster that is contemporary life. Weaving together gritty vernacular and cinematic prose, In Case of Emergency takes a darkly humorous, scathing look at the authoritarian state, global capitalism, and the gender binary.

“In this satirical and brilliantly translated novel, Mohebali showcases Iran's underground culture and the catastrophic realities of contemporary life. Her picturesque prose is darkly comical as she examines the political climate and social issues affecting our world.”—Booklist

“A brilliant and jarring portrait of contemporary Iran, rife with unrest, drugs, and destruction.” —Publishers Weekly

“A compelling portrait of a city in crisis.” —Kirkus

“Utterly shattering—I could hardly catch my breath. I read In Case of Emergency in one sitting without meaning to. Every page is a jolt, a catastrophe, a galloping, desperate search among the wreckage of state, family, and gender, hunting for that ever elusive fix. At turns hilarious and deeply unnerving, here is contemporary Tehran as never glimpsed before. Mariam Rahmani's pitch-perfect translation is intoxicatingly energetic, capturing all the poetry and pathos of disintegration. Read this now.” —Justin Torres, author of We the Animals

“For those of us with received ideas about contemporary life in Iran, In Case of Emergency is a revelation, but that is hardly the only reason to read this brilliant and highly original novel. Shadi, Mohebali’s protagonist, is the quintessential antiheroine: sharp-eyed, acerbic, an opium addict, hilariously funny, a sympathetic mess, and we root for her throughout. The desperate search for her next fix juxtaposed with the impending geological disaster of an earthquake creates page-turning tension, but resist turning the pages too quickly, lest you miss the myriad and complexity of flavors. Mariam Rahmani’s superb translation is fully evidenced in the precision of detail, the tone of voice, and most of all, the comedy, which is perhaps the most difficult, if not impossible, aspect of writing to convey from one language to another.” —Binnie Kirshenbaum, author of Rabbits for Food

“Mariam Rahmani’s startling new translation of Mahsa Mohebali’s In Case of Emergency practically vibrates in the hand. It’s demotic, queer, deeply and lovingly Persian in a way few texts that make it stateside ever are. It’s also laugh-out-loud funny, and humane in its treatment of addiction without condescending. Rahmani’s translation is brilliant—her language throughout dazzles and sears. Seriously, I can’t shut up about this book. It turns out I’d been waiting for it my entire life.” —Kaveh Akbar, author of Pilgrim Bell

“A macabre urban carnival of a novel. In Rahmani’s inspired, electric translation, Mohebali’s portrait of the unmoored offspring of Tehran’s educated elite jolts the reader, offering a rare visceral glimpse into contemporary Iran.” —Natasha Wimmer, translator of The Savage Detectives

“Hypnotic. Rahmani beautifully captures Mohebali’s slangy, strung-out narration. This underbelly tour of a Tehran shaken by both unrest and literal quakes kept me enthralled.” —Susan Bernofsky, coeditor of In Translation: Translators on Their Work and What It Means

“Mahsa Mohebali’s abrasive main character, Shadi, is looking for a fix while the world is ending in Tehran. With the tunnel-vision of a drug dependency and the carelessness of a self-indulgent young adult, the lens through which we experience the apocalyptic day is skewed away from the apocalypse itself. The build-up of “emergency” in this novel is both internal and external, as earthquakes cause the city to crumble and the desperation with which Shadi needs a hit parallelly crescendo. Through her gritty prose, Mohebali also provides subtle critiques of the underlying structures that finally brought the city to this tipping point (namely, capitalism and restrictive gender norms). A cynical, sometimes facetious critique of the unsustainable forces driving the world, Mohebali’s work is a short and wild ride that skillfully brings into focus the messy time of crisis we are all living in.” —Mrittika Ghosh, Seminary Co-op Bookstore

Mahsa Mohebali is an Iranian fiction writer. She is the author of several novels, as well as short story collections. Her short stories have appeared in English in the Guardian as well as the anthologies Tehran Noir (Akashic Books, 2014, trans. Salar Abdoh) and Alive and Kicking: Short Stories by Contemporary Iranian Women Writers (Aftab Publication, 2017, trans. Amir Marashi). In 2013 Mohebali was a resident with the International Writing Program at the University of Iowa. She lives and works in Tehran.

Mariam Rahmani is a writer and translator. Her fiction has appeared in Gulf Coast; her translations in n+1, Columbia Journal, and After Cinema: Fictions from a Collective Memory; and her nonfiction in Granta, BOMB magazine, the Los Angeles Review of Books, and the Rumpus. She holds a PhD in Comparative Literature and is the recipient of a PEN/Heim Translation Fund Grant as well as a US Fulbright Research Award. She is currently working on a debut novel.