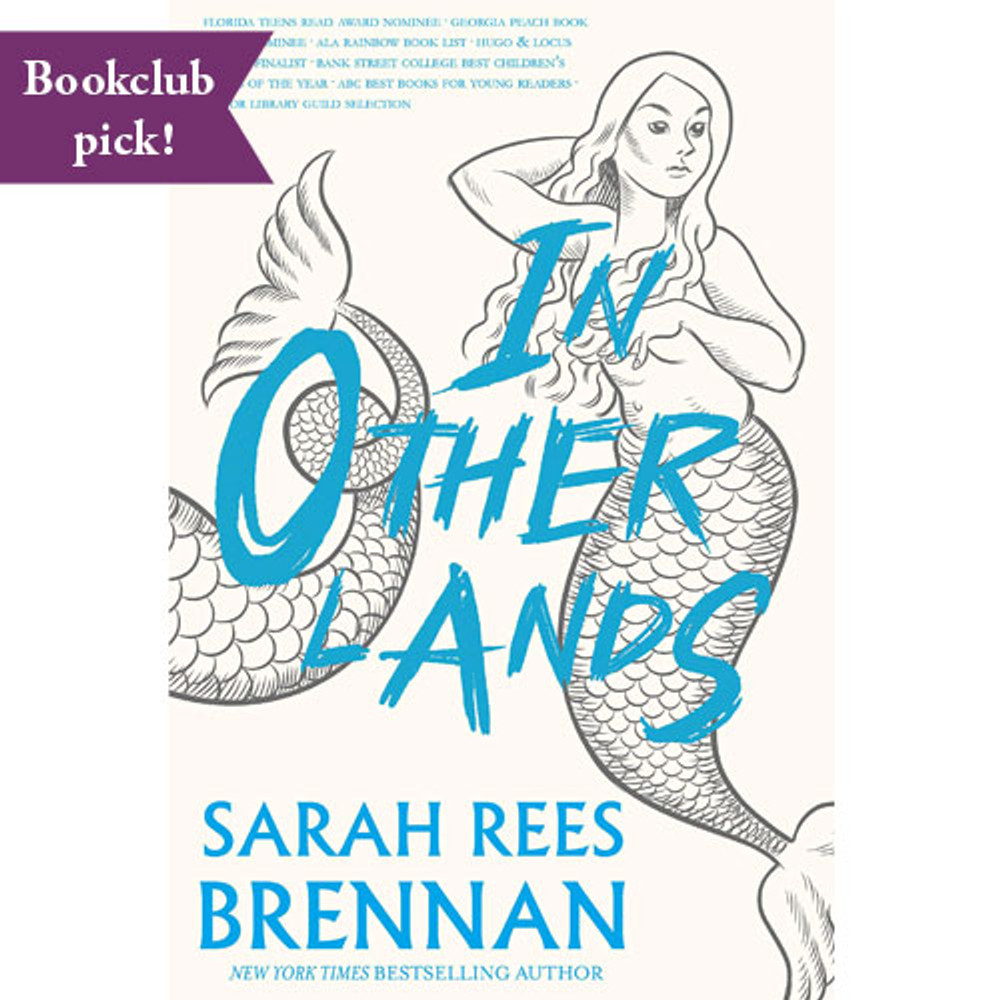 This title is our September 2019 pick for the FEMINIST SCI-FI BOOKCLUB! Find out more here.

The Borderlands aren’t like anywhere else. Don’t try to smuggle a phone or any other piece of technology over the wall that marks the Border ― unless you enjoy a fireworks display in your backpack. (Ballpoint pens are okay.) There are elves, harpies, and ― best of all as far as Elliot is concerned ― mermaids.

Elliot? Who’s Elliot? Elliot is thirteen years old. He’s smart and just a tiny bit obnoxious. Sometimes more than a tiny bit. When his class goes on a field trip and he can see a wall that no one else can see, he is given the chance to go to school in the Borderlands.
It turns out that on the other side of the wall, classes involve a lot more weaponry and fitness training and fewer mermaids than he expected. On the other hand, there’s Serene-Heart-in-the-Chaos-of-Battle, an elven warrior who is more beautiful than anyone Elliot has ever seen, and then there’s her human friend Luke: sunny, blond, and annoyingly likeable. There are lots of interesting books. There’s even the chance Elliot might be able to change the world.

In Other Lands is the exhilarating new book from beloved and bestselling author Sarah Rees Brennan. It’s a novel about surviving four years in the most unusual of schools, about friendship, falling in love, diplomacy, and finding your own place in the world ― even if it means giving up your phone.

"Four years in the life of an unloved English schoolboy who’s invited to a secret magical school and learns that even in fantasyland, real life is messier than books. . . . But over the course of four years training among child soldiers, Elliot, unsurprisingly, grows up. His slow development into a genuinely kind person is entirely satisfying, as is his awakening to his own bisexuality and to the colonialism, sexism, and racism of Borderlands society. . . . A stellar . . . wholly rewarding journey."
―Kirkus Reviews (starred review)

"Elliot Schafer is a small-for-his-age 13-year-old who is prone to being bullied―largely due to his personality, which slots somewhere between insufferable know-it-all and sarcastic jackass. When Elliot’s class travels to a 'random field in Devon, England' for a supposed scholarship test, he instead winds up in a strange world known as the Borderlands, which are filled with elves, mermaids, and other creatures. So begins Brennan’s hilarious, irreverent, and multilayered coming-of-age fantasy, set over several years. Elliot quickly befriends (and falls for) Serene, a fierce elven warrior, and arranges a reluctant truce with Luke Sunborn, the son of one of the Borderland’s founding families. All three―along with every young person there―are training in war or as councilors, charged with protecting the fragile barrier with the human world. Amid shifting relationships, the threat of war, and substantial growth among the characters, Elliot’s razor-edged wit and general inability to keep his mouth shut make for blissfully entertaining reading. Smart explorations of gender stereotypes, fluid sexuality, and awkward romance only add to the depth and delight of this glittering contemporary fantasy."
― Publishers Weekly (starred review)

"I have rewritten the first paragraph of this review a half-dozen times, trying to find some way to make clear that Sarah Rees Brennan has created a nearly perfect YA fantasy without gushing. I can’t do it. In Other Lands is brilliantly subversive, assuredly smart, and often laugh-out-loud funny. It combines a magic-world school setting with heaps of snark about everything from teen romance to gender roles, educational systems and serious world diplomacy."
― Colleen Mondor, Locus

"Brennan brilliantly turns the very genre she occupies on its head with this YA fantasy. In her latest, the human who falls into a magic world isn’t a strong, beautiful, charismatic hero. It is Elliot, a hero who might annoy, but who is also the most intensely relatable character to emerge from fantasy lately. For anyone who has ever wondered how they would fare in the fantasy worlds they enjoy reading about, In Other Lands is a novel that might answer that question. Even though Elliot is never painted as a prodigy at any of the new things he encounters, Brennan allows him to be heroic, and in the end, all the happiness he may receive feels earned."
― RT Book Reviews (4 stars)

"A subversive, sneaky, glorious tale of magic, longing, and growing into your wings."
― Holly Black, author of The Darkest Part of the Forest

"In Other Lands is a stunning example of Sarah Rees Brennan's style; her characters are hysterically funny with complex and nuanced inner lives that could break a reader's heart. Elliot, cranky and obnoxious teen that he is, desperately longs to be loved best by someone, but covers with immense sarcasm and general unkindness. Luke and Serene, both exceptionally talented and good-looking, also struggle with feeling displaced. The depiction of misandry in Elf culture is one of the funniest concepts that Rees Brennan has come up, and even that she turns into a deeper lesson for Serene, Elliot, and Luke. In Other Lands can come off as a parody of fantasy, but it delves deep into issues of race, gender, sexuality, and war, and absolutely nails the struggles and triumphs of growing up."
― Sami Thomason, Square Books

Sarah Rees Brennan: Sarah Rees Brennan was born and raised in Ireland and now lives in New York City. She is the New York Times bestselling author of Tell the Wind and Fire and the Lynburn Legacy series among others.

I Will Die in a Foreign Land