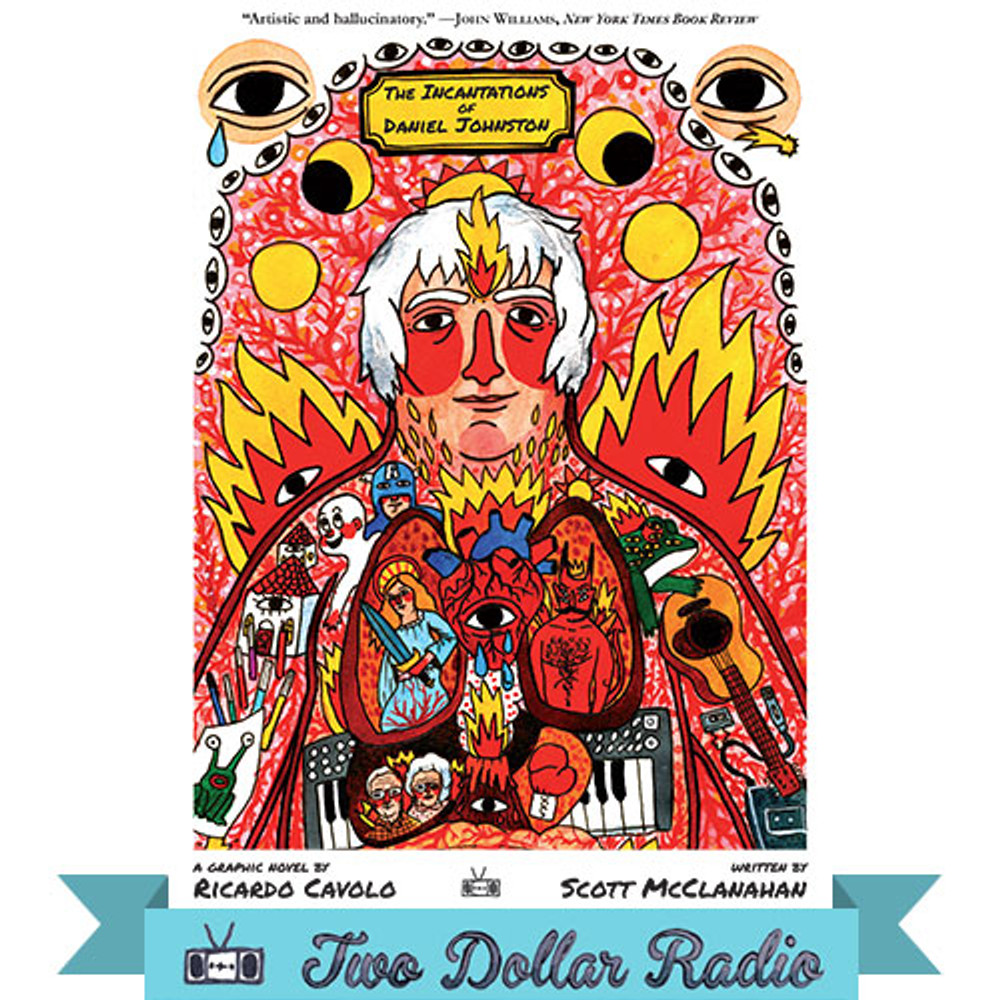 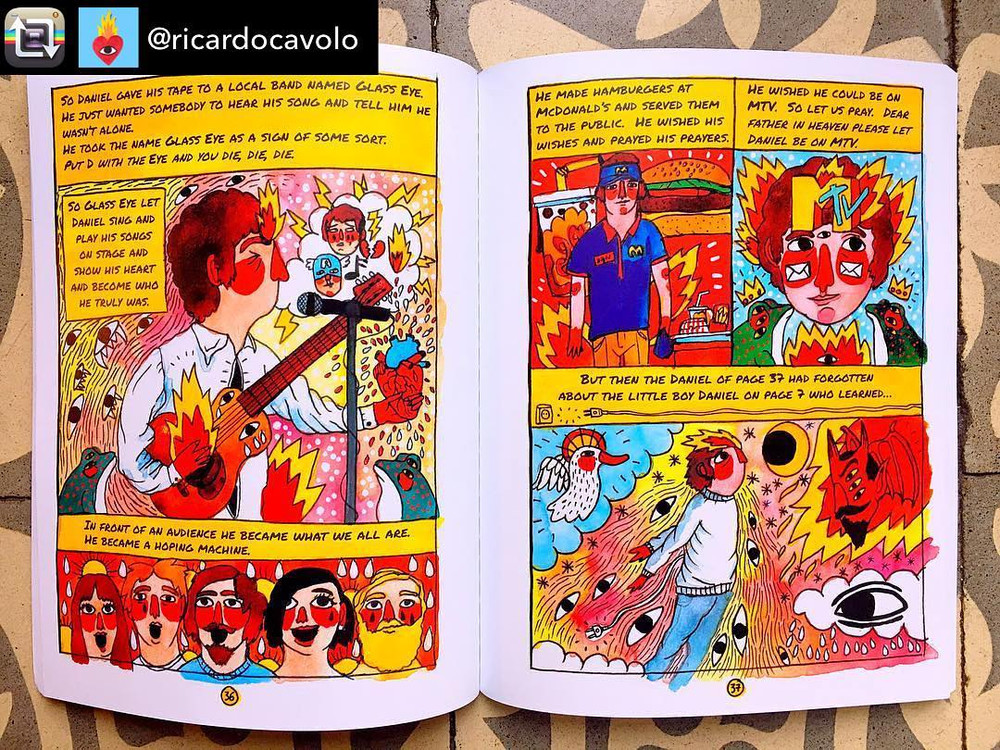 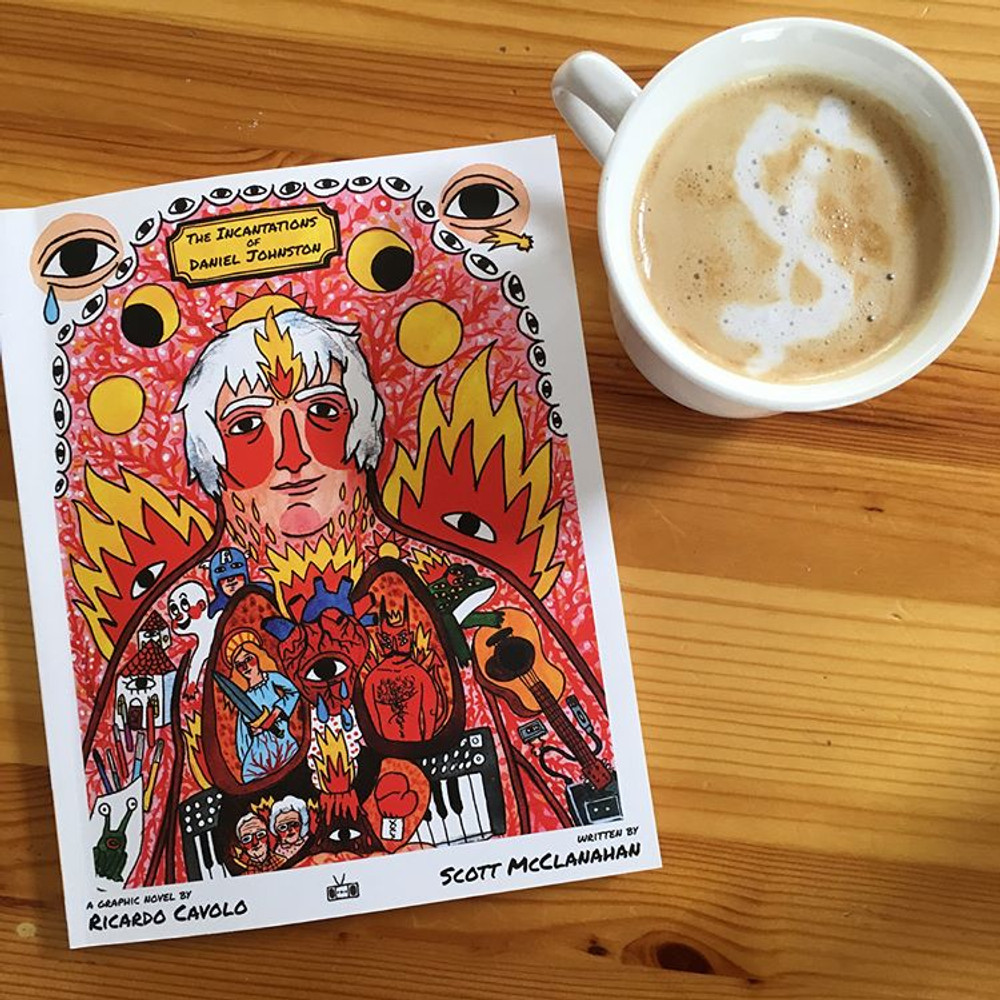 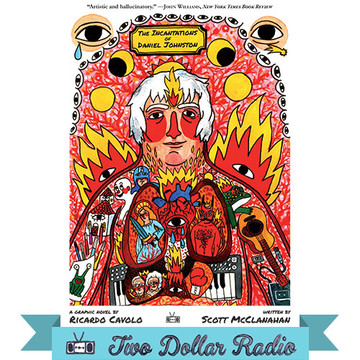 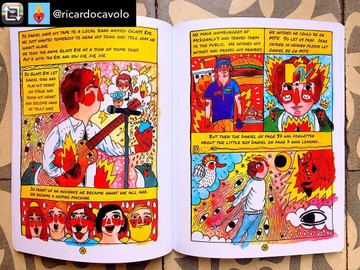 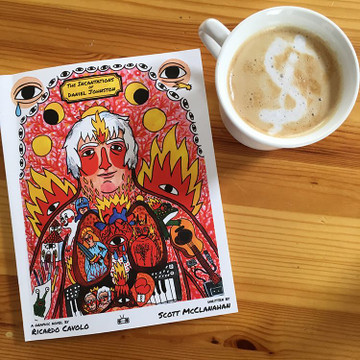 Long a fan of Daniel Johnston, the man and his music, Cavolo illustrates Johnston's colorful life, from his humble beginnings as a carnival employee to folk musician in Austin, to his rise to MTV popularity and persistent struggle with personal demons.

In addition to being visually very striking, with astoundingly economical prose McClanahan manages to deal with powerful and complex issues, such as how we as a society mythologize troubled artists, while continuing his ongoing exploration of human relationships, and the pliable interaction between reader and writer.

Read an excerpt of The Incantations of Daniel Johnston on BuzzFeed News | 6/29/2016:
An excerpt from the upcoming graphic novel about the musician Daniel Johnston by Ricardo Cavolo, written by Scott McClanahan.

The Incantations of Daniel Johnston by Ricardo Cavolo and Scott McClanahan =

"The comic book is the perfect medium — collaborative, visual, and verbal — to explore the power of art to connect people in spite / because of extenuating circumstances like mental illness. It’s magical to see Johnston’s art reverberate between Cavolo and McClanahan as they wrestle with these questions like (to choose a metaphor Johnston might appreciate) Jacob wrestling with God."
—Lauren O’Neal, Los Angeles Review of Books

"Fans of Daniel Johnston and his lo-fi, enigmatic music will devour this retelling of Johnston’s humble beginnings, his rise to fame, and his personal demons. While the prose appears sparse it delves into the problematic mythologizing of troubled artists and how we are guilty of turning mental health conditions into clichés."
—Maggy van Eijk, BuzzFeed News

"A self-referential story that acknowledges the odd ways that society constructs culture and celebrity and how hard it can be to fully capture a life, especially when that person is famous, or “cult famous,” as the case may be. But as McClanahan and Cavolo struggle to show the heart of a man who himself struggles to make art and live his life, they show their hearts as well—big, red, and beating.
—Laura Adamczyk, The A.V. Club

"Amazing... a perfect, intuitive blend of fellow fanatics with perspective. Both the writing and the artwork shine."
—Simon Sweetman, STUFF

"The Incantations of Daniel Johnston bears some similarities to the work of French artist David B. as well as R. Crumb’s shorter work about the religious visions of Philip K. Dick."
—Martin Schneider, Dangerous Minds

"Something wholly unexpected, grotesque, and poignant—a deeply idiosyncratic biographical project that is less interested in chronology and reported details than in the attendant horrors and anxieties of childhood, mental health, and creativity."
—Will Stephenson, The Fader

"You’ve never read anything like The Incantations of Daniel Johnston, a poetic, frenetic dive through the mind of the singer/songwriter, using it as a filter through which the larger strokes of his life are presented. What results is unstable, sympathetic, confused, and damned. As graphic novel biographies go, this one excels, using all the possibilities of its subject to shape the narrative execution, and to skillfully inform the meat of the text, and the themes that it addresses."
—John Seven, Comics Beat

"If there’s a cultural ambassador to Appalachia at this moment, it very well may be West Virginian writer Scott McClanahan. McClanahan’s latest work, The Incantations of Daniel Johnston, is a graphic novel about the life of Daniel Johnston, the influential outsider rock musician and artist also from West Virginia. Like the accompanying images provided by Spanish artist Ricardo Cavolo, McClanahan’s prose is intoxicating, taking care to detail magnificent anecdotes from Johnston’s life while simultaneously shedding light on ineffable notions like culture, psychology and fame."
—Dan Mistich, Salon

"Stunning... spirited and dark and sweet and sad. Reading The Incantations of Daniel Johnston makes the reader feel less alone, makes us feel connected to the vivid beauty and torment that underpins the human experience. McClanahan and Cavolo have managed to generate something spectacular."
—Kimberly King Parsons, Fanzine

"Written by McClanahan and illustrated by Ricardo Cavolo, [The Incantations of Daniel Johnston] explores music, mental illness, and art. There is humor but also real pain, provided by Johnston’s difficult story as well as McClanahan’s powerful narration. It’s a loose biography, a history imagined."
—Phil McCausland, The A.V. Club

"Chronicling the life and art of cult musician like Daniel Johnston was never going to be an easy task. The approach chosen by collaborators Cavolo and McClanahan marries vividly surreal art with McClanahan’s stylized prose–a singular combination to evoke a singular artist."
—Vol. 1 Brooklyn (best non-fiction of 2016 [so far])

"No tribute has been closer to the spirit of Johnston than a new graphic novel, The Incantations of Daniel Johnston [which] manages to pay homage to the legend of Johnston without romanticizing his mental illness. The illustrations by Cavolo, a Spanish artist, are inspired by folk and devotional art, so they elevate Johnston and his figurative creations to the realm of the mystical and the mysterious. Cavolo has effectively created Saint Daniel, but it is a complicated path to sainthood."
—Leah Caldwell, Texas Observer

"McClanahan pays due respect to Johnston’s genius while casting a less mythical or overly inspirational light on his struggles."
—Amy Diegelman, Book Riot '5 Comics to Watch for in July 2016'

"What McClanahan and Cavolo accomplished can only be called magic and holds the same bizarre power as Johnston’s voice, scrunched face, and shaky hands whenever he’s not holding a guitar. [The Incantations of Daniel Johnston is] a weird, heartbreaking, deeply personal piece of art that will hopefully become as much a part of Daniel Johnston’s story as the iconic mural he left in Austin."
—Gabino Iglesias, Vol. 1 Brooklyn

"Cavolo’s art is lush, cartoonish, and red, red, red—the better to illustrate Johnston’s giant heart and big, big love for all the girls in his life who already have boyfriends. [The Incantations of Daniel Johnston] acknowledges the odd ways that society constructs culture and celebrity and how hard it can be to fully capture a life, especially when that person is famous, or “cult famous,” as the case may be. But as McClanahan and Cavolo struggle to show the heart of a man who himself struggles to make art and live his life, they show their hearts as well—big, red, and beating."
—The A.V. Club

"Astounding... as beautiful and heartbreaking, dazzling and giddy as you would expect a brilliant comic-book freestyle biography of Daniel Johnston would be. The love and affection for their subject is matched by a subtly keen dissection of the ways we mythologize troubled artists and mental illness."
—Michael Cerveris, Magnet Magazine

"Mesmerizing, equal parts ebullient and ecstatic as it is frightening and tragic. Cavolo’s playfully psychedelic illustrations and McClanahan’s dizzyingly-hallucinatory and infectious prose work together to forge a dark alchemy that summons Daniels’ angels and demons, that reaches deep into his mythos both for inspiration and to debunk."
—Fanzine

"Like an acid-laced children's book, The Incantations of Daniel Johnston follows the course of the musician's life with a hallucinatory reverence, before departing into the happy, beautiful, life filled with love that could have been for Johnston. McClanahan's prose over Cavolo's stunning illustrations left me welling with tears."
—Lindsay MaHarry, The Skeeve

"[Cavolo's] illustrations look a bit like tattoos, a bit like comic book drawings (if a sixth grader had done them . . . but a sixth grader with an MFA). McClanahan makes bold, funny, and true statements about the nature of culture, the history of art, success, psychology, et cetera. [The Incantations of Daniel Johnston] is very good."
—Jamie Iredell, ARTS ATL

"Tragic, beautiful, funny, an intensely sad portrait of the unfortunate life of a complex artist. Like all of McClanahan's work, there is humor, pathos and an intimate understanding of how difficult it can be just to live a life, this time punctuated by the colorful, strange and somehow movie art of Ricardo Cavolo."
—Justin Souther, Malaprop's Bookstore (Asheville, NC)

"The best cover of the year. Sorry to all other books that are out in 2016, this thing is just glorious."
—Jason Diamond, Vol. 1 Brooklyn

"Even without hearing a note of Johnston’s music, The Incantations of Daniel Johnston captivates."
—Nathan Thomas, The Parthenon

"Whether or not you know anything about Daniel Johnston, this dazzling graphic novel will beseige your consciousness with colors so vivid they threaten—at any moment—to dribble from the page in warm spats like blood."
—William Grabowski, The Night Run

"[Cavolo's] bright and bold creations—usually made with traditional techniques and materials such as watercolors, inks and acrylics—depict misfit characters in Frida Kahlo-esque folk art tones and bring 'em into a contemporary context with cool details like glasses, tattoos, bikes and dope shoes."
—Shelley Jones, Huck Magazine

"[McClanahan is] the Poet Laureate of Real America."
—Nick Moran, The Millions Ricardo Cavolo is a world-renowned Spanish artist whose artwork has been on display everywhere from Moscow to Montreal. He has completed artwork for Absolut Vodka, the Glastonbury Festival (UK), Urban Outfitters (France, Germany, England), Nike, FC Barcelona, and Fox Sports Mexico. Scott McClanahan is the acclaimed and award-winning author of Crapalachia, Hill William, and The Collected Works of Scott McClanahan: Volume 1. The Washington Post has called McClanahan's work "the genuine article."

Enjoy a sneak peek of select pages from The Incantations of Daniel Johnston! (Use the "full screen" option at bottom right to enlarge the pages):