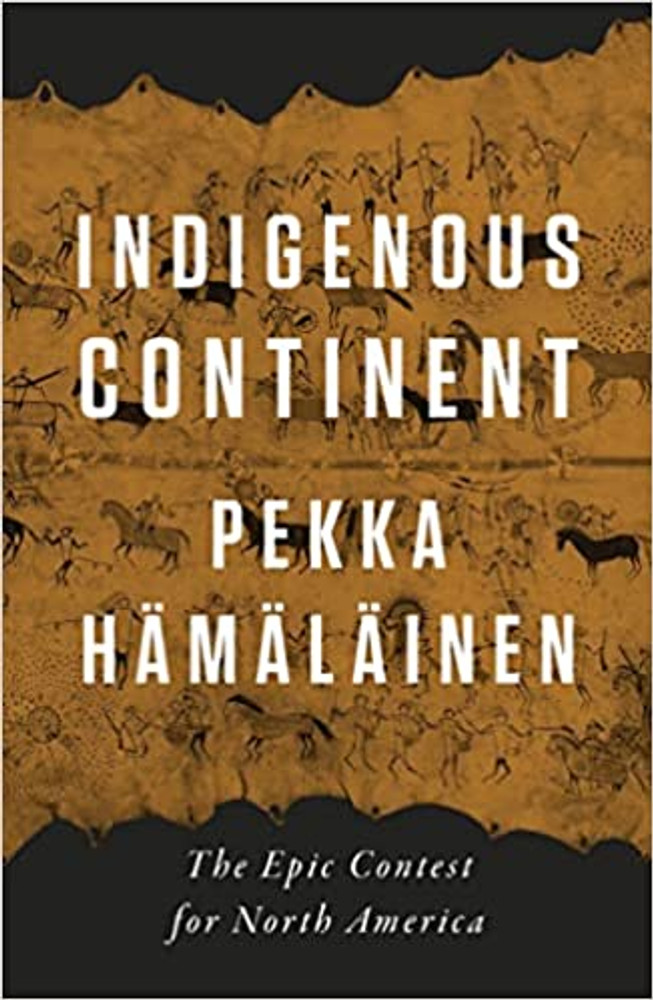 A prize-winning scholar rewrites 400 years of American history from Indigenous perspectives, overturning the dominant origin story of the United States.

There is an old, deeply rooted story about America that goes like this: Columbus “discovers” a strange continent and brings back tales of untold riches. The European empires rush over, eager to stake out as much of this astonishing “New World” as possible. Though Indigenous peoples fight back, they cannot stop the onslaught. White imperialists are destined to rule the continent, and history is an irreversible march toward Indigenous destruction.

Yet as with other long-accepted origin stories, this one, too, turns out to be based in myth and distortion. In Indigenous Continent, acclaimed historian Pekka Hämäläinen presents a sweeping counternarrative that shatters the most basic assumptions about American history. Shifting our perspective away from Jamestown, Plymouth Rock, the Revolution, and other well-trodden episodes on the conventional timeline, he depicts a sovereign world of Native nations whose members, far from helpless victims of colonial violence, dominated the continent for centuries after the first European arrivals. From the Iroquois in the Northeast to the Comanches on the Plains, and from the Pueblos in the Southwest to the Cherokees in the Southeast, Native nations frequently decimated white newcomers in battle. Even as the white population exploded and colonists’ land greed grew more extravagant, Indigenous peoples flourished due to sophisticated diplomacy and leadership structures.

By 1776, various colonial powers claimed nearly all of the continent, but Indigenous peoples still controlled it―as Hämäläinen points out, the maps in modern textbooks that paint much of North America in neat, color-coded blocks confuse outlandish imperial boasts for actual holdings. In fact, Native power peaked in the late nineteenth century, with the Lakota victory in 1876 at Little Big Horn, which was not an American blunder, but an all-too-expected outcome.

Hämäläinen ultimately contends that the very notion of “colonial America” is misleading, and that we should speak instead of an “Indigenous America” that was only slowly and unevenly becoming colonial. The evidence of Indigenous defiance is apparent today in the hundreds of Native nations that still dot the United States and Canada. Necessary reading for anyone who cares about America’s past, present, and future, Indigenous Continent restores Native peoples to their rightful place at the very fulcrum of American history.

"Oxford University scholar Hämäläinen (Lakota America) delivers a sweeping and persuasive corrective to the notion that “history itself is a linear process that moves irreversibly toward Indigenous destruction.” Reorienting the history of the Western Hemisphere away from “European ambitions, European perspectives, and European sources,” he focuses instead on the “overwhelming and persistent Indigenous power” that lasted in North America from 10000 BCE until the end of the 19th century. Throughout, Hämäläinen highlights the agency, resilience, diversity, and kinship of Indigenous peoples.... Skillfully shifting across regions and time periods.... Revelations abound.... This top-notch history casts the story of America in an astonishing new light."
― Publishers Weekly, starred review

"A vigorous, provocative study of Native American history by one of its most accomplished practitioners. . . . . In this follow-up to Lakota America, the author focuses on the long war between Indigenous peoples and alliances with the European colonial powers. . . . Throughout, the author resurrects important yet often obscured history, creating a masterful narrative that demands close consideration. An essential work of Indigenous studies that calls for rethinking North American history generally."
― Kirkus Reviews, starred review

"In this scrupulously researched survey of the past, a brilliant Finnish scholar presents a compelling picture. He shows that, at least through the 18th century and well into the 1800s, Indigenous peoples flourished by setting the agendas in their efforts to keep their land and resources and establishing the terms for the settlements that followed, even when they didn’t win their battles. This book recognizes that the strengths of Indigenous peoples came from a network of shifting, powerful kinship. . . . This is a book everyone could benefit from reading."
― David Keymer, Library Journal, starred review

"This is sure to be fascinating reading for anyone who grew up hearing that same old foundational myth of America―you know, that one that doesn’t exactly hang together."
― Emily Temple, Literary Hub, “Most Anticipated Books of 2022”

From the Back Cover

“Indigenous Continent is a triumph. Pekka Hämäläinen has crafted a grand, sweeping narrative premised on a fundamental truth: American history is Indigenous history. To read this book is to see the past anew.”
―Elizabeth Fenn, Pulitzer Prize–winning author of Encounters at the Heart of the World: A History of the Mandan People

“In this strikingly original and sweeping account of the epic contest for North America, Pekka Hämäläinen challenges the foundational story of conquest that underpins U.S. history. That storyline, he argues, is based on outlandish imperial claims and unrealized declarations of mastery. In fact, Native peoples resisted everywhere and at every turn, and they continue to do so to this day. Persuasive and compelling, Indigenous Continent is a much-needed correction to centuries of colonial aggrandizing.”
―Claudio Saunt, author of the National Book Award finalist Unworthy Republic: The Dispossession of Native Americans and the Road to Indian Territory

“In Indigenous Continent, Pekka Hämäläinen continues his pathbreaking work that re-envisions the North American narrative to put Native peoples at center stage. Here he pulls back to a centuries-long perspective of Native power, strategic maneuvering, and spiritual and diplomatic adaptation that every student of our common history will find illuminating.”
―Elliott West, author of The Last Indian War and The Contested Plains, winner of the Francis Parkman Prize