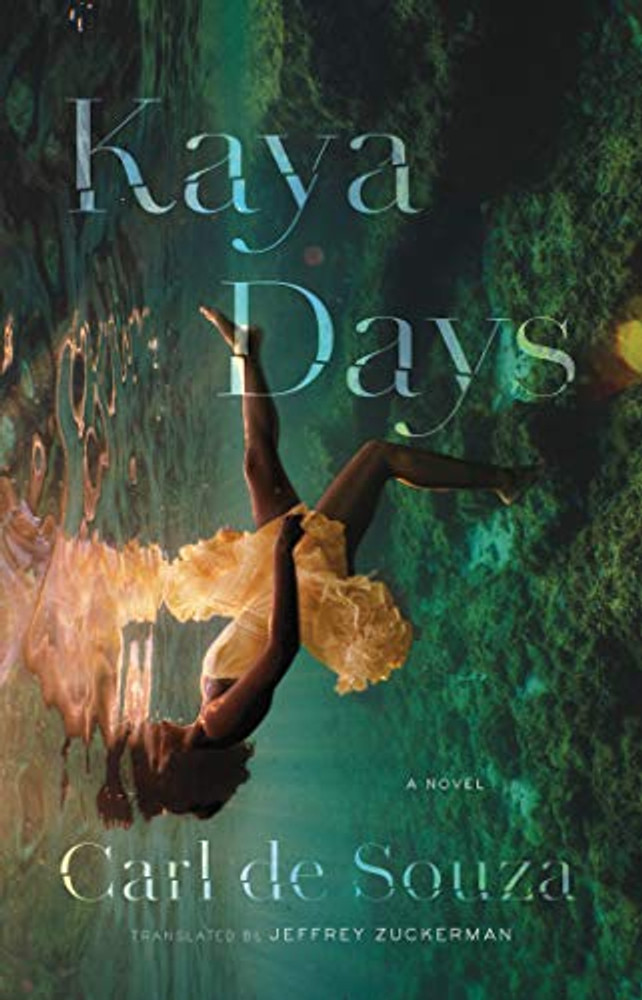 “This is no night for theater. All the drama’s outside.”

In 1999, the Mauritian musician Joseph Réginald Topize, better known as Kaya, was arrested for smoking weed while performing at a concert. Following his death in police custody just days later, the island nation surged with violence in a long-overdue demand for justice from the marginalized populations of the African island off the coast of Madagascar.

In Kaya Days, the spirit of the island and its many people―Hindu, Muslim, Chinese, Franco-Mauritian, and Creole―is distilled into a young woman’s daylong search through the uproar for her younger brother, who has gone missing. Amid burning cars and buildings, opportunists and revolutionaries, Santee rises into another world, a furious, brilliant one. An exhilarating journey into night from a small Hindu village to the big city, and from innocence into womanhood, Carl de Souza’s surreal English-language debut, artfully translated from French by Jeffrey Zuckerman, is an explosion of politics and poetry, a humid dream-world of revolutionary fervor where seemingly anything―everything―is possible.

“An electrifying portrait of a tiny island nation on fire.” ―Kirkus Reviews

“A frantic, stream-of-consciousness novel in which a teenager comes of age in the middle of violent upheaval.” ―Foreword Reviews

“De Souza gives us a superb portrait of a town in riot…a mythical journey through a sort of hell.” ―The Modern Novel

"I read Kaya Days in a single setting―in between and on flights―and found it to be dreamlike and evocative, a dramatic, rich and potent contribution to the thankfully multiplying literature from and of our oceanic realms. It was such a delightful companion." ―Yvonne Adhiambo Owuor, author of The Dragonfly Sea

“A searing, urgent, far-seeing dispatch that imprints the reality of Mauritius, at odds with its picture-postcard views, on the global consciousness. Carl de Souza is a formidable voice in Mauritian literature; his account is an indictment and a plea for understanding among its communities.” ―J.M.G. Le Clézio, winner of the Nobel Prize for Literature

"Kaya Days strives to recreate not so much a reality as a truth... [Carl de Souza's] fluid yet dense prose conveys, with flecks of poetry, an extraordinary journey of the soul set, over the course of Kaya Days, against a backdrop of upheaval. His characters live through these events and remain themselves, even as they endure the aftershocks of riotous violence. His novel, which has to be read again and again to fully comprehend its scope, is a rock thrown into seemingly calm waters that will make waves for a long time after."―Le Soir (Belgium)

"Even more than [Mauritius's] ethnic tensions, which he delineates meticulously, Carl de Souza trains his gaze on the humanity of these beings abandoned by all and guides us deep into a world with no limits left." ―L'Express (Mauritius)

"Through the lens of femininity and childhood, the story delves in an unprecedented manner into the themes of innocence and cruelty. The striking prose interweaves a frenetic style and a rising, almost-shrill rhythm in a dreamy way. The achingly personal relationships of these stupefying days reveal a deep-rooted perspective of the island's history." ―L'Humanité (France)

Carl de Souza is a Mauritian novelist, short story writer, and academic. He began writing in French around 1980, with Halley’s La Cométe receiving the Pierre Renaud Prize in Mauritius in 1986. His works are based on the history of Mauritius and its people. Kaya Days, a dramatization of the race riots following the death of the seggae singer Kaya, will be published by Two Lines Press in 2021 in translation from French by Jeffrey Zuckerman. It is his first work to be translated into English. He lives in Mont Piton, Mauritius.

Jeffrey Zuckerman is a translator of French and the Digital Coordinator at Music & Literature magazine. His translations include Ananda Devi’s Eve Out of Her Ruins, the diaries of the Dardenne brothers, and Jean Genet’s The Criminal Child. He has also contributed shorter pieces to Frieze, The New Republic, The NYRDaily, The Paris Review Daily, The White Review, and VICE. Jeffrey studied English literature and literary translation at Yale University, and has served as a judge for the PEN Translation Prize and the National Translation Award. He is a recipient of a PEN/Heim Translation Fund grant for his ongoing work on the complete stories of Hervé Guibert.