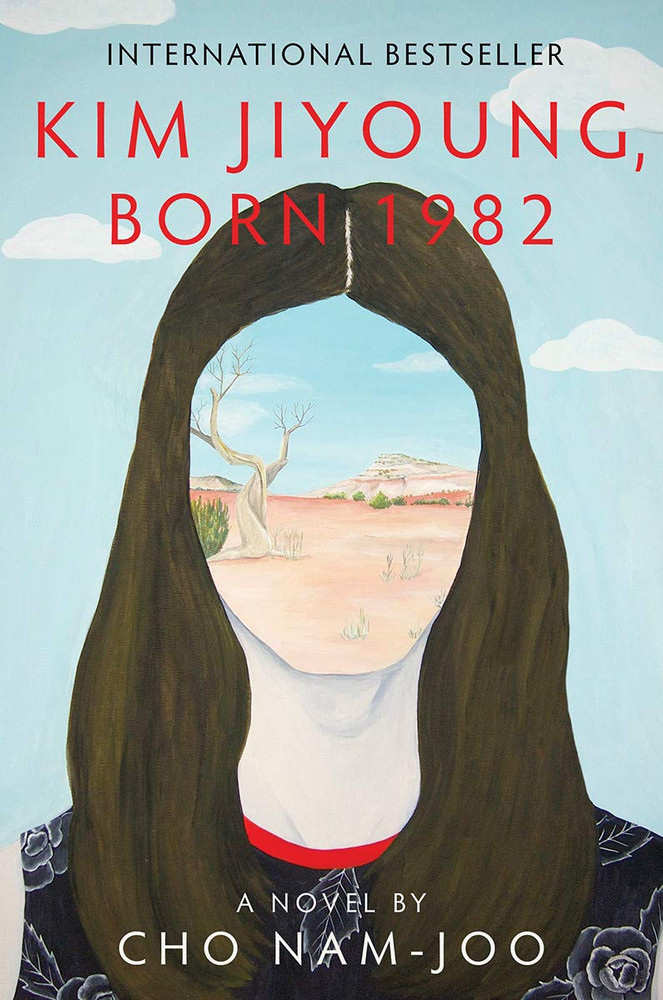 In a small, tidy apartment on the outskirts of the frenzied metropolis of Seoul lives Kim Jiyoung. A thirtysomething-year-old “millennial everywoman,” she has recently left her white-collar desk job―in order to care for her newborn daughter full-time―as so many Korean women are expected to do. But she quickly begins to exhibit strange symptoms that alarm her husband, parents, and in-laws: Jiyoung impersonates the voices of other women―alive and even dead, both known and unknown to her. As she plunges deeper into this psychosis, her discomfited husband sends her to a male psychiatrist.

In a chilling, eerily truncated third-person voice, Jiyoung’s entire life is recounted to the psychiatrist―a narrative infused with disparate elements of frustration, perseverance, and submission. Born in 1982 and given the most common name for Korean baby girls, Jiyoung quickly becomes the unfavored sister to her princeling little brother. Always, her behavior is policed by the male figures around her―from the elementary school teachers who enforce strict uniforms for girls, to the coworkers who install a hidden camera in the women’s restroom and post their photos online. In her father’s eyes, it is Jiyoung’s fault that men harass her late at night; in her husband’s eyes, it is Jiyoung’s duty to forsake her career to take care of him and their child―to put them first.

Jiyoung’s painfully common life is juxtaposed against a backdrop of an advancing Korea, as it abandons “family planning” birth control policies and passes new legislation against gender discrimination. But can her doctor flawlessly, completely cure her, or even discover what truly ails her?

Rendered in minimalist yet lacerating prose, Kim Jiyoung, Born 1982 sits at the center of our global #MeToo movement and announces the arrival of writer of international significance.

“Cho’s clinical prose is bolstered with figures and footnotes to illustrate how ordinary Jiyoung’s experience is.... When Kim Jiyoung, Born 1982, was published in Korea in 2016, it was received as a cultural call to arms.... Like Bong Joon Ho’s Academy Award-winning film Parasite, which unleashed a debate about class disparities in South Korea, Cho’s novel was treated as a social treatise as much as a work of art.... The new, often subversive novels by Korean women, which have intersected with the rise of the #MeToo movement, are driving discussions beyond the literary world.”
- Alexandra Alter, New York Times

“[Kim Jiyoung] laid bare my own Korean childhood ― and, let’s face it, my Western adulthood too ― forcing me to confront traumatic experiences that I’d tried to chalk up as nothing out of the ordinary. But then, my experiences are ordinary, as ordinary as the everyday horrors suffered by the book’s protagonist, Jiyoung. This novel is about the banality of the evil that is systemic misogyny. . . . Jiyoung, like Gregor Samsa, feels so overwhelmed by social expectations that there is no room for her in her own body; her only option is to become something ― or someone ― else.”
- Euny Hong, New York Times Book Review

“Cho Nam-joo’s third novel has been hailed as giving voice to the unheard everywoman. . . . [Kim Jiyoung] has become both a touchstone for a conversation around feminism and gender and a lightning rod for anti-feminists who view the book as inciting misandry . . . [The book] has touched a nerve globally . . . The character of Kim Jiyoung can be seen as a sort of sacrifice: a protagonist who is broken in order to open up a channel for collective rage. Along with other socially critical narratives to come out of Korea, such as Bong Joon-ho’s Oscar-winning film Parasite, her story could change the bigger one.”
- Sarah Shin, The Guardian

“In this fine―and beautifully translated―biography of a fictional Korean woman we encounter the real experiences of many women around the world.”
- Claire Kohda Hazelton, The Spectator

“Following the life of the titular character from her mother’s generation through her own childhood, young adulthood, career, marriage and eventual 'breakdown,' the book moves around in time to subtly uncover how patriarchy eats away at the psyches and bodies of women, starting before they’re even born.”
- Sarah Neilson, Seattle Times

“Already an international best-seller, television scriptwriter Cho’s debut novel has been credited with helping to ‘launch Korea’s new feminist movement.’ The fact that gender inequity is insidiously pervasive throughout the world will guarantee that this tale has immediate resonance, and its smoothly accessible, albeit British English vernacular–inclined, translation by award-winning translator Chang will ensure appreciative Anglophone audiences. Cho’s narrative is part bildungsroman and part Wikipedia entry (complete with statistics-heavy footnotes).... Cho’s matter-of-fact delivery underscores the pervasive gender imbalance, while just containing the empathic rage. Her final chapter, “2016,” written as Jiyoung’s therapist’s report―his claims of being “aware” and “enlightened” only damning him further as an entitled troll―proves to be narrative genius.”
- Terry Hong, Booklist [starred review]

“The book’s strength lies in how succinctly Cho captures the relentless buildup of sexism and gender discrimination over the course of one woman’s life. . . The story perfectly captures misogynies large and small that will be recognizable to many.”
- Kirkus Reviews

Cho Nam-Joo was a television scriptwriter for nine years. Her debut novel, Kim Jiyoung, Born 1982, has sold in nineteen countries and over a million copies. She lives in Korea.

Jamie Chang is an award-winning translator and teaches at the Ewha Womans University in Seoul, South Korea.

A Good Time to Be Born