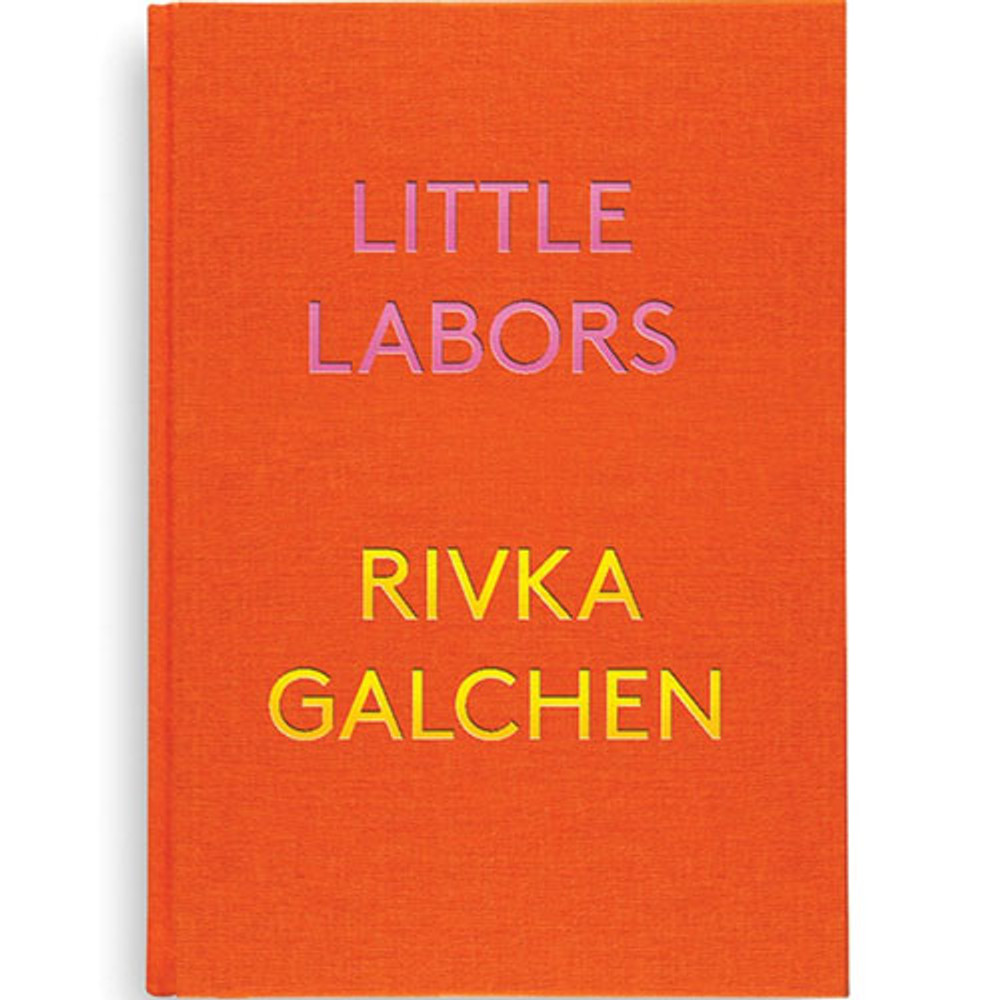 Rivka Galchen’s Little Labors is a droll and dazzling compendium of observations, stories, lists, and brief essays about babies and literature

Little Labors is a slanted, enchanted literary miscellany. Varying in length from just a sentence or paragraph to a several-page story or essay, Galchen’s puzzle pieces assemble into a shining, unpredictable, mordant picture of the ordinary-extraordinary nature of babies and literature. Anecdotal or analytic, each part opens up an odd and tender world of wonder. The 47 Ronin; the black magic of maternal love; babies morphing from pumas to chickens; the quasi-repellent concept of “women writers”; origami-ophilia in Oklahoma as a gateway drug to a lifelong obsession with Japan; discussions of favorite passages from the Heian masterpieces Genji and The Pillow Book; the frightening prevalence of orange as today’s new chic color for baby gifts; Frankenstein as a sort of baby; babies gold mines; babies as tiny Godzillas …

“Galchen has a knack for taking a thread and fraying it, so that a sentence never quite ends up where you expect.”
- James Wood, The New Yorker

“Little Labors has range. It contemplates both “the royalty of infants” and the uselessness of babies (compared to other animals). It’s rare to find a work of likewise small stature grow so ponderously into such an expansive, magnanimous, and living thing. Like a child ― if you want ― or a book with meaning.”
- Jonathon Sturgeon, Flavorwire

“Galchen's implicit proposition ― that babies can be the subject of serious art, that we may coo and think simultaneously ― feels surprising, even radical, in a world where motherhood and intellectualism are still placed instinctively at odds. It may be a little book, but it is not a small one.”
- NPR

“To read Rivka Galchen is to enter a wonderland where the bizarre and the mundane march in unlikely lockstep.”
- Michael Lindgren, The Washington Post

“In Little Labors, a highly original book of essays and observations, Rivka Galchen writes, “The world seemed ludicrously, suspiciously, adverbially sodden with meaning.” The birth of her daughter, she observes, “made me again more like a writer ... precisely as she was making me into someone who was, enduringly, not ­writing.” [...] I adore Galchen’s quiet, and the bravery of this book’s fragments. You get the sly sense reading this book that you are not seeing the whole writer; there is a sleight of hand ― something only partially revealed ― so that the fragments glow more. Her kaleidoscopic subjects leap from the literary to the mundane and back again. In discussing the form of “The Pillow Book,” an 11th-century miscellany written by a Japanese lady of the court, Galchen writes that she associates the book with “the ‘small’ as opposed to the ‘minor.’” This is an important distinction, and, I think, a defense of her own form. [...] Galchen writes of children: “Their arrival feels supernatural, they seem to come from another world, life near them takes on a certain unaccountable richness, and they are certain, eventually, to leave you.” Given the tenderness of that situation (life’s richness or design flaw), how can we as writers, and as people, not pay attention? I am happy that Galchen did, and I am confident that many mothers (and other sleepless readers) will pick up this book and feel that they have found an unexpectedly intimate friend.”
- The New York Times Book Review

“Little Labors offer a glimpse into an unknown future, a chance for women still unsure about children to see how their lives and minds might change.”
- New Republic

“This essay collection from fiction and science writer Rivka Galchen is not your mother's motherhood lit. Brief, gemlike reflections on adjusting to life under the rule of a baby daughter (called 'the puma') are interwoven with literary and historical references. It's a book that will ring both familiar and strange.”
- Anya Kamenetz, NPR

“Galchen is, for my money, one of the most gifted stylists writing in American English today. Her funniness is otherworldly; she is the reigning champion of litotes, or understatement for effect. Preternaturally deft, Galchen can do almost anything with next to nothing.”
- Los Angeles Review of Books

“Little Labors is a short, beguiling book about babies. About babies in art (with wrongly shaped heads), about babies in literature (rare, often monstrous), and about the arrival of a baby in author Rivka Galchen’s apartment.It is not a novel, nor a memoir, nor exactly is it an essay. It is more a wunderkabinett of baby-related curios. There are anecdotes about the effort of obtaining a passport for the baby, about homeless men’s reaction to the baby, about a mean neighbor who repeatedly asks whether the baby is abnormally large. There are lists, of authors with and without kids, and of “mother writers” which includes Elena Ferrante and Sarah Manguso, and also, “two of the most celebrated,” Karl Ove Knausgaard and Louie C.K. There are ruminations on class, taste, Godzilla, Rumpelstiltskin, the color orange, screens. It is a peculiar book, and astonishing in its effect.”
- Boston Globe

“As Galchen adeptly demonstrates, the pram in the hall is no longer the sombre enemy of good art―ignoring it is.”
- Gavin Tomson, Maisonneuve

RIVKA GALCHEN's 2008 first novel, Atmospheric Disturbances, and her 2014 story collection, American Innovations, were both New York Times Best Books of the Year. She has received many awards, as well as an MD from the Mount Sinai School of Medicine. Galchen lives in New York City.