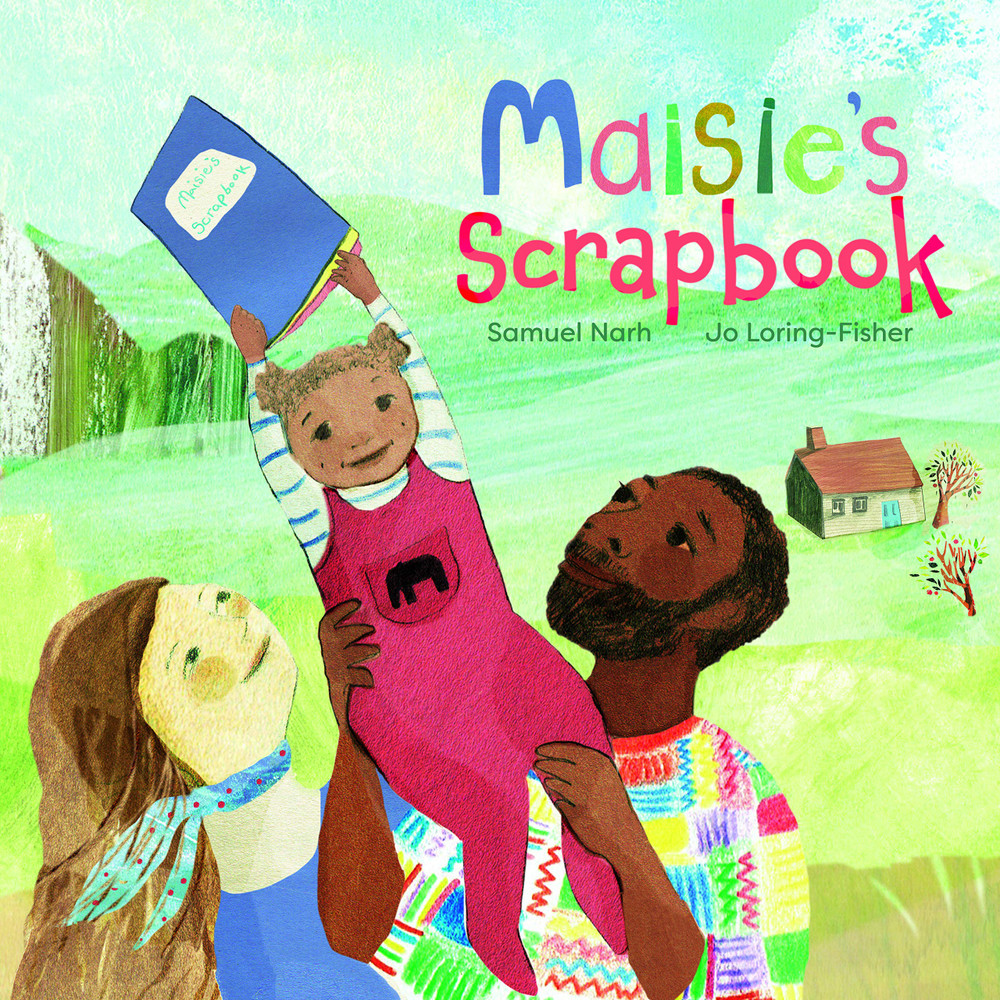 As the seasons turn, Maisie rides her bull in and out of Dada's tall tales. Her Mama wears linen and plays the viola. Her Dada wears kente cloth and plays the marimba. They come from different places, but they hug her in the same way. And most of all, they love her just the same. A joyful celebration of a mixed-race family and the love that binds us all together.

"In this lyrical tribute to a family's unconditional and universal love, Maisie's parents encourage her adventurous spirit and vivid imagination throughout the seasons. The folklore her father shares plays an influential role in Maisie's flights of fancy ('She’s the hero in Dada's tall tales'); on one whimsical spread, she's pictured dressed in a bull costume while gripping the leg of an airborne spider (ostensibly Ananse, mentioned in the endpapers). The book's most encompassing missive is the richness of Maisie's mixed heritage: light-skinned Mama wears linen, cooks risotto, and plays the viola, while dark-skinned Dada wears kente cloth, cooks jollof rice, and plays marimba. Loring-Fisher's subtly textured mixed-media art weaves these various cultural images into a comforting portrait of an all-embracing and loving family, embodied by the confident girl, who is 'as relentless as spring rain,' 'as bright as a summer’s day,' 'as spirited as autumn leaves,' and 'as pure as winter's snow.' The story's key message resounds clearly: no matter the season, and no matter what Mama and Dada are wearing, cooking, and playing, 'They love her in the same way.'
―Publishers Weekly

"Maisie has the best of many worlds in her multiracial family. A brown-skinned little girl with puffy Afro hair, Maisie begins her scrapbook with small watercolor portraits of her family in the front endpapers: Mama and Dada as children and several pictures of Maisie's younger self. She writes that she is 'the little girl who saves the world from Ananse the spider' and whose mama tells her 'a bull is not a pet.' This sets the stage for the contrasts between her parents: Her dark-skinned West African dada takes her on regular flights of fancy, while her white mama keeps her grounded and safe. Despite their differences, both parents love her dearly. Dada plays a marimba, Mama plays viola, and Maisie plays maracas―this family embraces global music. The Sankofa bird and the Ghanaian Adinkra symbol Gye Nyame ('except for God') appear in the illustrations, both of which relate to going back and fetching the past to find a way forward―a likely motivation for Dada's African stories. In the mixed-media illustrations, the outdoor and fantasy scenes fill the pages with color and contrast with Maisie's time indoors, where entertaining herself seems to present a slight challenge. A quiet, positive story that opens a window into what it can look and feel like to grow up in a biracial, multinational family that's rich in story. (Picture book. 3-6)"
―starred, Kirkus Reviews

Samuel Narh was born and raised in Ghana. He is a natural storyteller. He loves to paint stories using words. He is aiming at touching and moving people across the world with his stories.