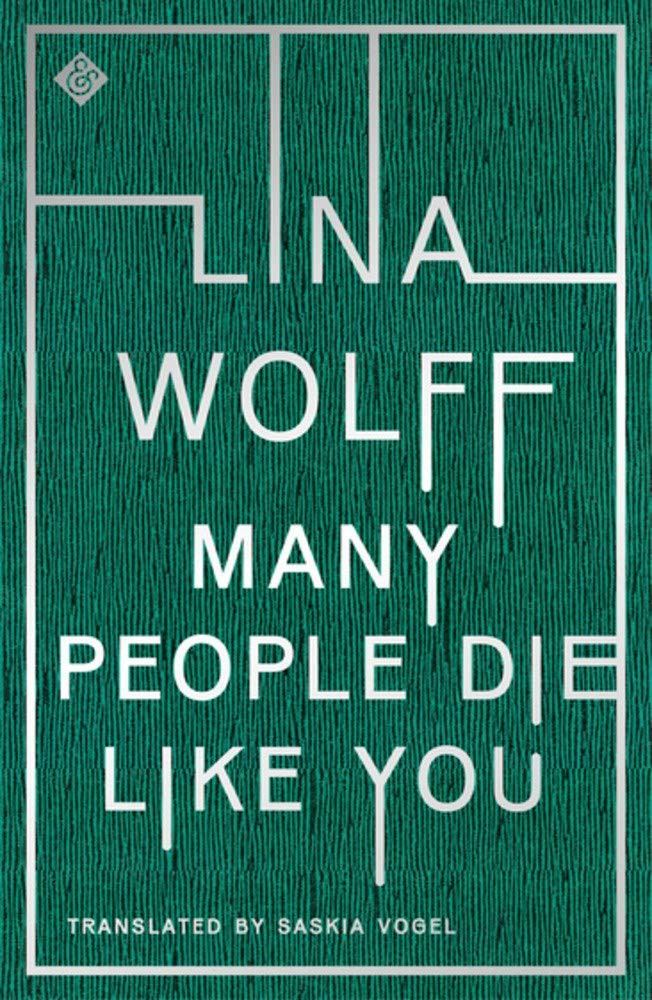 In this collection from the winner of Sweden’s August Prize, Lina Wolff gleefully wrenches unpredictability from the suffocations of day-to-day life, shatters balances of power without warning, and strips her characters down to their strangest and most unstable selves. Wicked, discomfiting, delightful and wry, delivered with the deadly wit for which Wolff is known, Many People Die Like You presents the uneasy spectacle of people in solitude, and probes, with savage honesty, the choices we make when we believe no one is watching … or when we no longer care.

‘Wolff revels in turning the tables on expectation and convention. Each story [starts] without preamble, ostensibly casual, but always with authority.”―Catherine Taylor, Irish Times

“[Wolff] explores the choices we make when we think no one is watching.”―Dazed

“Nothing thwarts quite as excruciatingly as thwarted desire. Wanting what they can’t have is a speciality of many of these characters.”―Stuart Walton, Hong Kong Review of Books

“Wolff excels with the disaffected and the weird.”―Kirkus Reviews

“Wolff shows us that while conventionality is, indeed, death, the opposite isn’t true: unconventionality isn’t life, and it won’t automatically make you happy.”―Marta Balcewicz, Ploughshares

"A good short story collection feeds our desire for interesting characters and good storytelling without demanding a large time commitment. Lina Wolff’s Many People Die Like You certainly meets those criteria. Her characters traverse compelling plots that often take them and us to unexpected and often uncomfortable places. Each of her well-crafted stories ends with enough left unexplained to keep us thinking beyond that last page and with the lingering pleasure of a story well-told. I do not often re-read, but these stories have enough complexity to bring me back to them again." ― The Raven Bookstore, Kansas

“An immediate success for Lina Wolff ... Many People Die Like You is a more than promising debut. Lina Wolff is a skilled stylist and a good storyteller. " ⁠―Arbetarbladet

“Several of the stories are so funny that you’d probably bring joy to your neighbours if you read them aloud.” ⁠―Skånska Dagbladet

"Many People Die Like You is full of life in motion. Depicted with such certainty that even the narrator’s voice must at times give way to the swelling language. And so, Lina Wolff has arrived as one of the important voices in Swedish literature. Not least because of the freedom the texts create for themselves. A freedom full of pleasure and humor alongside ever-present earnestness.” ⁠―Helsingborgs Dagblad

"Lina Wolff either quickly visits people who are happening to have a good, perhaps heightened conversation. Or, she tells a story with a beginning and end. Two approaches to the short story, here both are equally exciting to read. " ⁠―Kultureytt, Radio SR P1

"It's a matter of course of Lina Wolff's way of writing, as though each formulation and twist has been there all along, just waiting to be written down by her. Perhaps it is a matter of self-esteem, combined with a drive that draws you instantly and relentlessly into her stories. / ... / Wolff creates a hypnotic pull around her characters, making the reader wish they could remain in the story, how crass and chewy the lives portrayed can seem. The main characters are as often men as they are women, and Wolff writes with equal ease from a female and a male perspective. Human as humans are: sad and comical, petty and grand. " ⁠―Svenska Dagbladet

"Many People Die Like You is a fantastic short story collection. It's quiet, thoughtful and, in spite of all the suffering, very funny." ⁠―Vi magazine

Swedish writer Lina Wolff has lived and worked in Italy and Spain. During her years in Valencia and Madrid, she began to write her short story collection Many People Die Like You. Bret Easton Ellis and the Other Dogs, her first novel, was awarded the prestigious Vi Magazine Literature Prize and shortlisted for the prestigious 2013 Swedish Radio Award for Best Novel of the Year. It was published by And Other Stories in 2018, followed by her second novel, The Polyglot Lovers, in 2019. Wolff now lives in southern Sweden.


Saskia Vogel is an author and translator from Los Angeles, now living in Berlin. Permission, her debut novel, has been published in English, Spanish, French and Swedish. She has translated leading Swedish authors such as Karolina Ramqvist, Katrine Marcal, and Lena Andersson. Her translations and writing have appeared in publications such as Granta, Guernica, The White Review, The Offing, Paris Review Daily, and The Quietus. Her translation of Lina Wolff’s The Polyglot Lovers was awarded the English PEN Translates award.

Indigenous People's History of the US for Young People