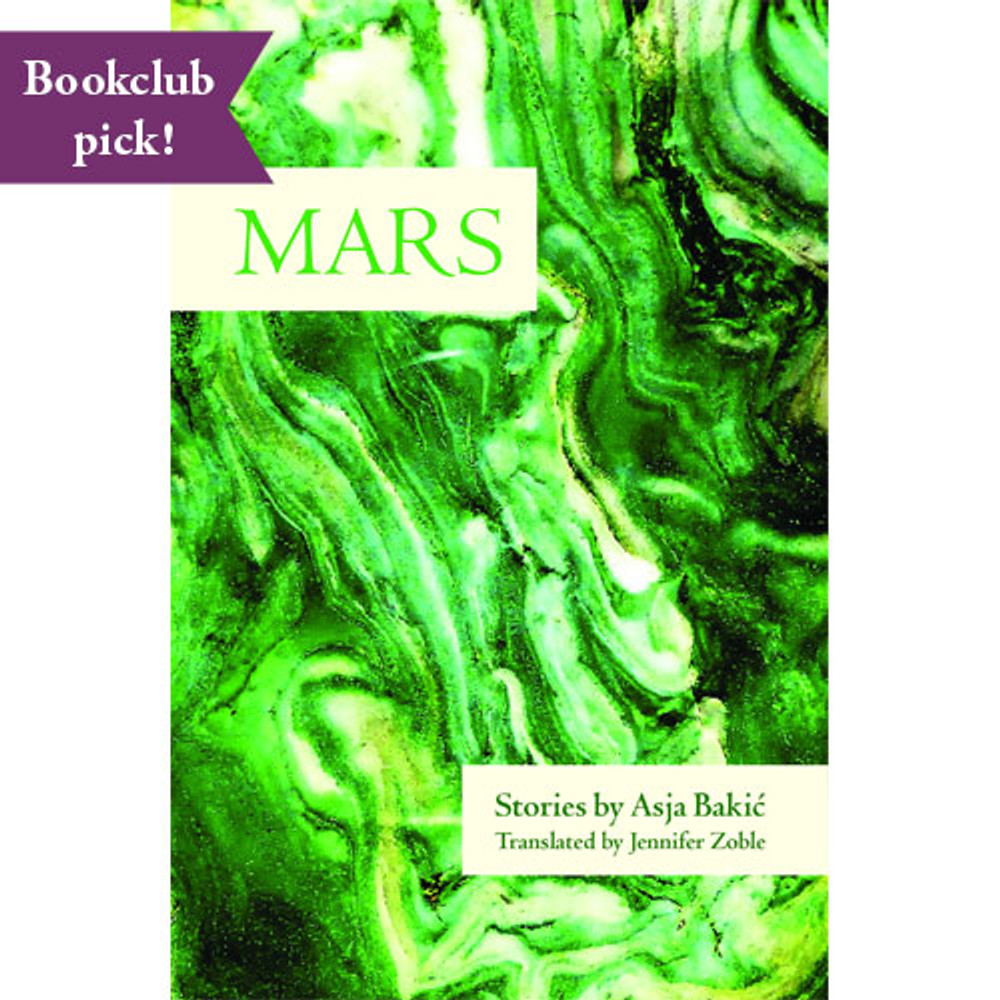 This title is our July 2019 pick for the FEMINIST SCI-FI BOOKCLUB! Find out more here.

Mars showcases a series of unique and twisted universes, where every character is tasked with making sense of their strange reality. One woman will be freed from purgatory once she writes the perfect book; another abides in a world devoid of physical contact. With wry prose and skewed humor, an emerging feminist writer explores twenty-first century promises of knowledge, freedom, and power.

"Bosnian writer Bakic’s debut teems with the oddball narratives of George Saunders, the eerie atmosphere of Edgar Allan Poe, and the feminist intellect of Marge Piercy. . . . Told in a straightforward manner that transports speculative fiction into almost realist territory, Bakic’s collection imaginatively and strikingly examines sci-fi tropes from not only the point of view of women, but also from the voice of an effortlessly gifted writer whose future is much brighter than that of those depicted in her stories." —Publishers Weekly (starred review)

“Bakic’s stories are perfectly of the American short-fiction zeitgeist—dark, sometimes indeterminate, sidestepping realism—but as the afterword points out, there are few writers from the Balkans that make use of the speculative or the dystopian in their work, which makes this collection all the more darkly alluring.”—Kirkus Reviews

“Mars showcases Asja Bakić’s strong and unique voice. These are sly, uncommon stories—a rare mix of the witty and the visceral, with no small hint of the decadent and transgressive. A major talent.” —Jeff VanderMeer, author of Borne

“Asja Bakić’s debut will transport you to another world, one that is as ethereal as it is cryptic. A visceral, imaginative, and deeply satisfying work.” —Cristina Rodriguez, Deep Vellum Books

“Unsettling in unsettling ways, Bakić’s mix of realism with science fiction and fabulism occupies the uncanny valley between the recognizable and the unrecognizable, unsheathing the weirdness of daily life.” —Josh Cook, Porter Square Books

“There’s an immediacy to Bakić’s offbeat worldview, sometimes strange and surreal, sometimes terrifying and upsetting, that pairs perfectly with the madness of the current political moment.” —Locus Magazine

Asja Bakić (1982) is a Bosnian poet, writer, and translator. She was born in Tuzla, where she obtained a degree in Bosnian language and literature. Her second book, a collection of short stories entitled Mars (2015), was shortlisted for the Edo Budiša Award for young writers. Her poems and stories have been translated into English, Polish, Czech, Macedonian, Slovenian, Romanian and Swedish. She writes the blog In the Realm of Melancholy (asjaba.com) and is coeditor of the feminist webzine Muff(muf.com.hr). She currently lives and works in Zagreb, Croatia.

Jennifer Zoble is a writer, editor, educator, and literary translator. She coedits InTranslation, the online journal of international literature that she cofounded in 2007 at The Brooklyn Rail; teaches academic and creative writing in the interdisciplinary liberal studies program at NYU; and translates Bosnian/Croatian/Serbian- and Spanish-language literature. Her translations have appeared in Anomalous, Washington Square, Absinthe, The Iowa Review, The Baffler, and Stonecutter, among others. She currently lives and works in New York City.

Ellen Elias-Bursać has been translating fiction and nonfiction by Bosnian, Croatian, and Serbian writers since the 1980s, including novels and short stories by David Albahari, Dubravka Ugrešić, Daša Drndić, and Karim Zaimovič. She is co-author of a textbook for the study of Bosnian, Croatian, and Serbian with Ronelle Alexander and author of Translating Evidence and Interpreting Testimony at a War Crimes Tribunal: Working in a Tug-of-War, awarded the Mary Zirin Prize in 2015. She has taught at the Harvard Slavic Department, Tufts University, ASU and the New England Friends of Bosnia and Herzegovina.