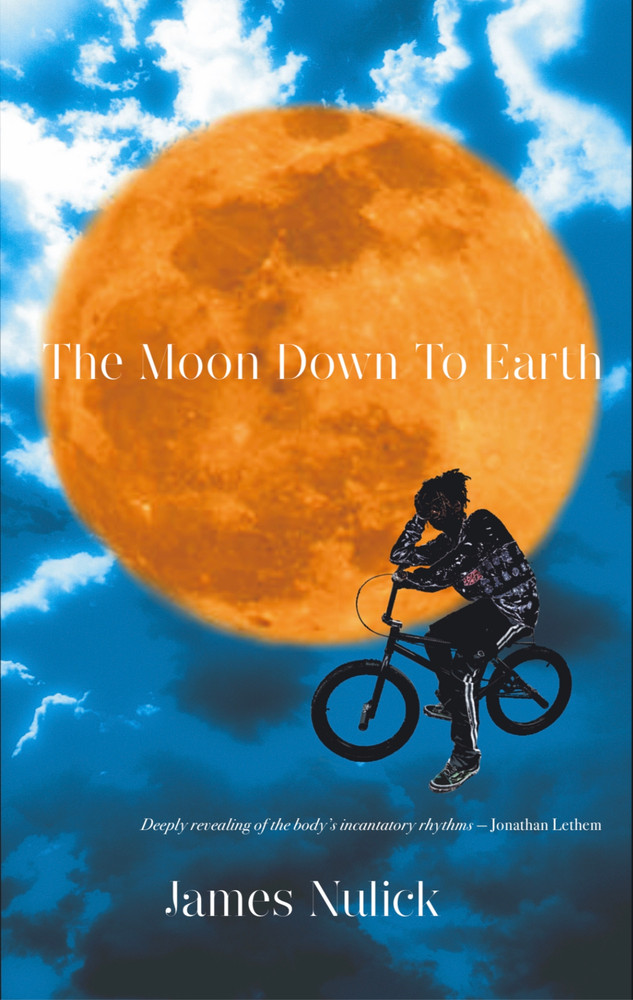 Moon Down to Earth

"In The Moon Down to Earth, the definitions of conventional beauty and acceptable desire are ripped open and turned inside out. James Nulick’s characters felt utterly alive to me. This is a fantastic novel that will stay with me a long time." —Chelsea Hodson, author of Tonight I’m Someone Else

"James Nulick’s prose in The Moon Down to Earth is extraordinary, once harsh and tender, flaying and consoling, yet also enlivened by wit and erudition. The results are deeply revealing of the body’s incantatory rhythms, the somatic thought-forms. In this manner he delves with his reader to the limit of his characters’ souls." —Jonathan Lethem

Beautiful people always get what they want.

Elizabeth Salas, single, middle-aged, and mostly confined to her room, lives in a faceless city in the American Southwest. She has little hope for the future. And then a young man named Jace Jason walks through the door…

Epic in scope, The Moon Down to Earth is filled with living, breathing characters rarely seen in modern novels today.

Look no further for the great American novel. James Nulick has lusted, labored and agonized to deliver just that. The Moon Down to Earth does more to remind us what the form is capable of than any in recent memory. With its almost unbearably intimate and probing portrayals of its richly inhabited characters, through their rolling, cascading thoughts, Nulick situates us in their deepest interiors and implicates us in their crimes. Río Seco is a Hispanic neighborhood in North Hill, a barrio evocative of the essence of the American Southwest. Moon follows eight coexisting lives as they navigate the quotidian and confront uncomfortable truths about themselves and the world, our world, which their humanity must reckon with. It so completely submerges us in the milieux that you can smell the dirt and desert dust. It never objectifies, never panders, it interrogates and provokes, it’s the kind of book that’ll light up parts of your brain you haven’t used in a very long time. It’s an experience like no other which will jolt a reader into recognition of what it is to be alive and human in 21st century America, with all its dimmed promises and tragic dimensions, its numbing vibrations, ebbings and flowings, its coruscating, convulsing noise and seductively unspeakable pinched nerve promises. Mystifying in its testament to our universal condition with respect to alien longings, Moon may as well have been programmed by an extraterrestrial on an ancient technology in some lost future long ago. Intoxicating and hallucinatory, The Moon Down to Earth stimulates in such a way as to lay bare everything you’re hiding. It reads you as you read it. Don’t miss this singular experience of sharing time on this rock together and alone. Nulick has put it all here in this extraordinary feat of revelation, defiant in its sensitivity and tireless determination to challenge the limits of writing.