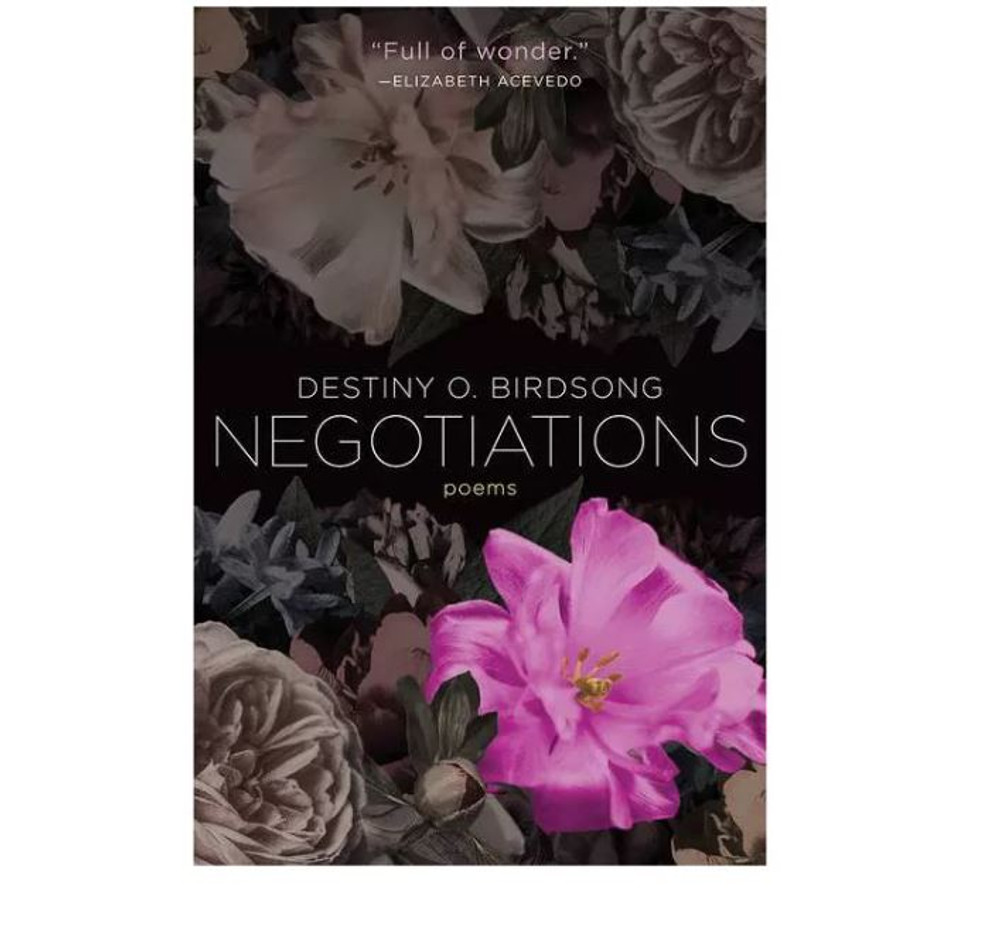 Urgent, unflinching, and utterly singular, Destiny O. Birdsong's debut negotiates identities shaped by seemingly contradictory spaces: the academy and the hood, the bedroom and the sanctuary, the hospital room and the beauty salon.

What makes a self? In her remarkable debut collection of poems, Destiny O. Birdsong writes fearlessly towards this question. Laced with ratchetry, yet hungering for its own respectability, Negotiations is about what it means to live in this America, about Cardi B and top-tier journal publications, about autoimmune disease and the speaker’s intense hunger for her own body―a surprise of self-love in the aftermath of both assault and diagnosis. It’s a series of love letters to black women, who are often singled out for abuse and assault, silencing and tokenism, fetishization and cultural appropriation in ways that throw the rock, then hide the hand. It is a book about tenderness and an indictment of people and systems that attempt to narrow black women’s lives, their power. But it is also an examination of complicity―both a narrative and a black box warning for a particular kind of self-healing that requires recognizing culpability when and where it exists.

“The terms of Destiny O. Birdsong’s Negotiations are scalding and tender. The speaker in this searing debut collection accounts for what has been stolen, what has been given, and what’s left. This speaker “always knows how it looks,” knows the contours of her own “singular, decadent life,” knows to “[translate] each ache/ into inquiry.” Birdsong excavates a national history and her speaker’s personal histories, tracks how their intersections and aftermaths wreak havoc in the woman who survives. But Birdsong’s Negotiations endgame is not simply survival―it aims to flourish.”
- Donika Kelly, author of Bestiary

“Reading Negotiations is like walking into a boxing match with an indefatigable fighter; you will be struck, and it will hurt. But for all of it’s ferocity in how it grapples with womanhood, sexuality, assault, and race, this collection is also full of wonder. Of forgiveness. Of tenderness, the like of which, ultimately, delivers the most powerful sucker punch.”
- Elizabeth Acevedo, National Book Award winner of The Poet X

Destiny O. Birdsong is a Louisiana-born poet, fiction writer, and essayist. She has received fellowships from Cave Canem, Callaloo, Jack Jones Literary Arts, the Ragdale Foundation, and the MacDowell Colony, and won the Academy of American Poets Prize, Naugatuck River Review’s 2016 Narrative Poetry Contest, and Meridian’s 2017 “Borders” Contest in Poetry. She earned both her MFA and PhD from Vanderbilt University, and now lives and works in Nashville, Tennessee.