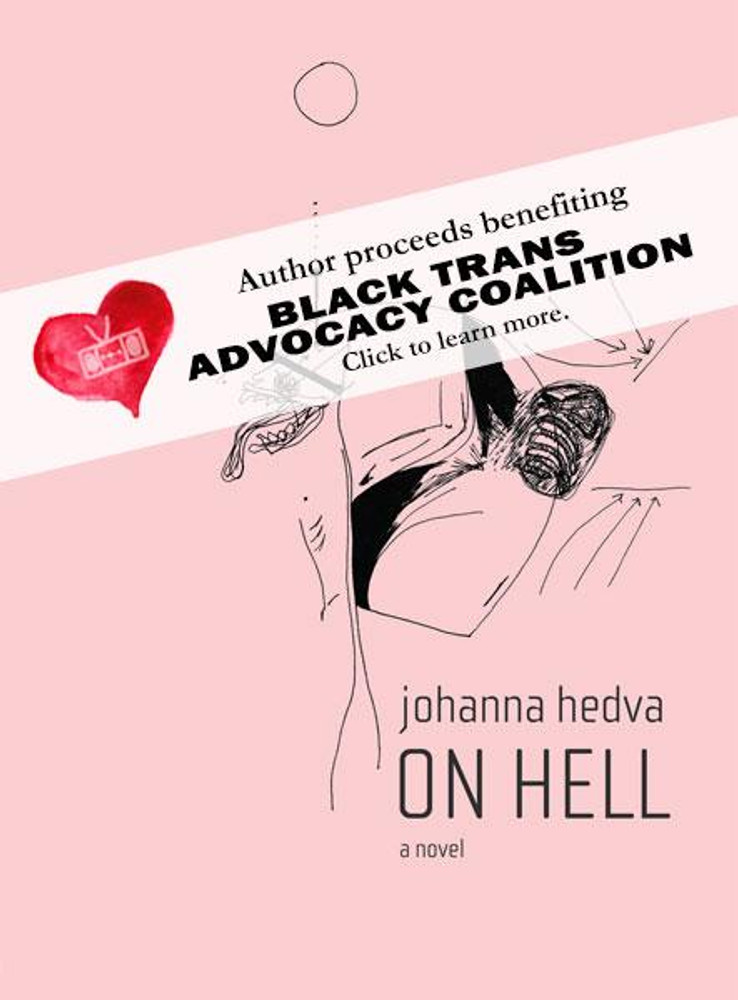 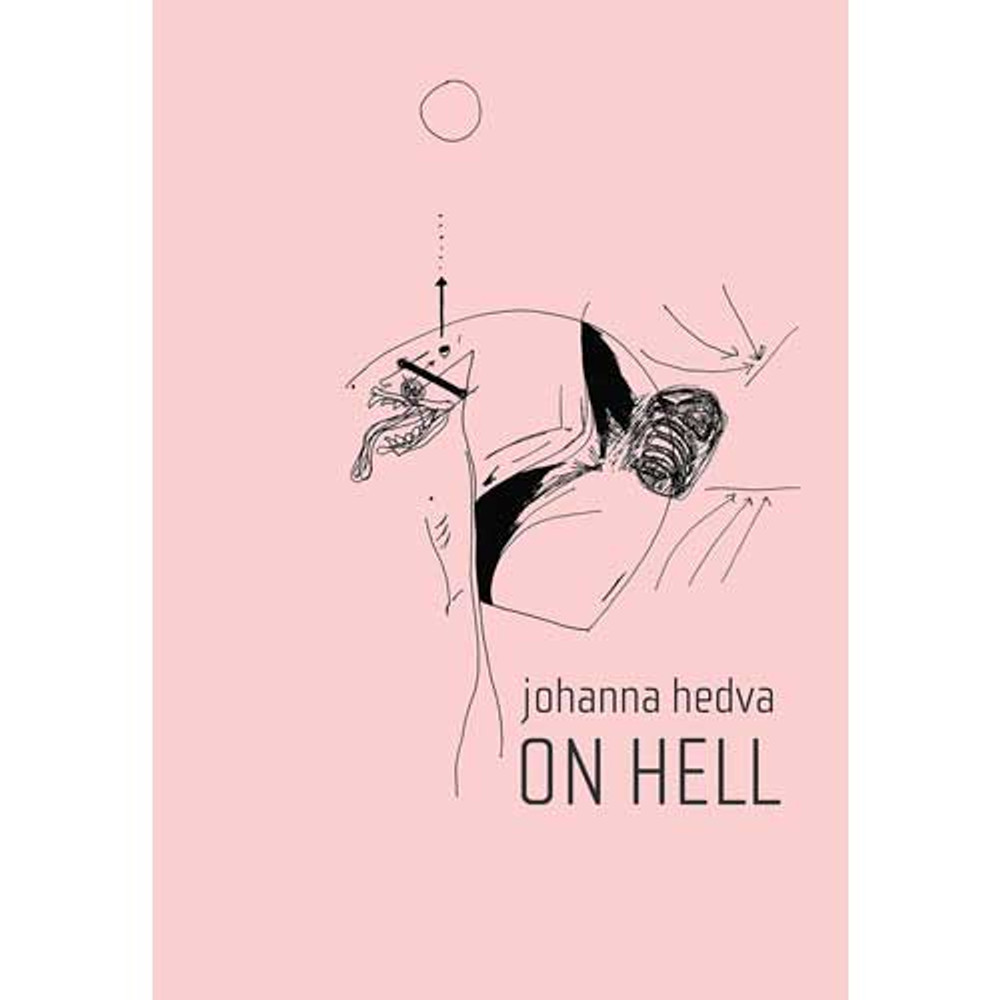 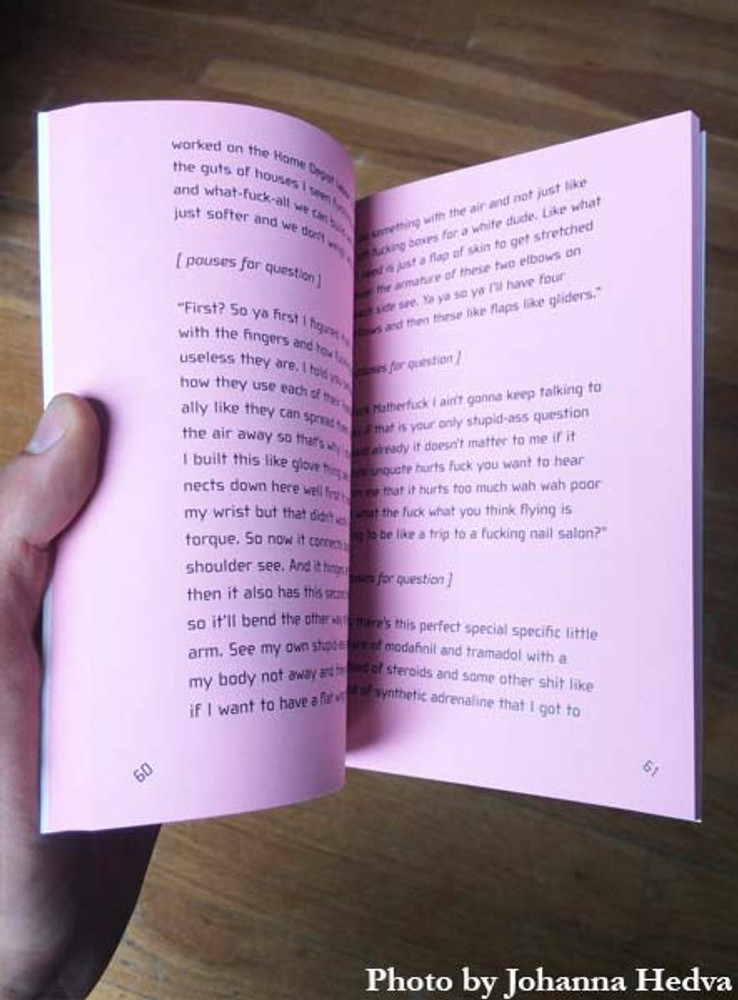 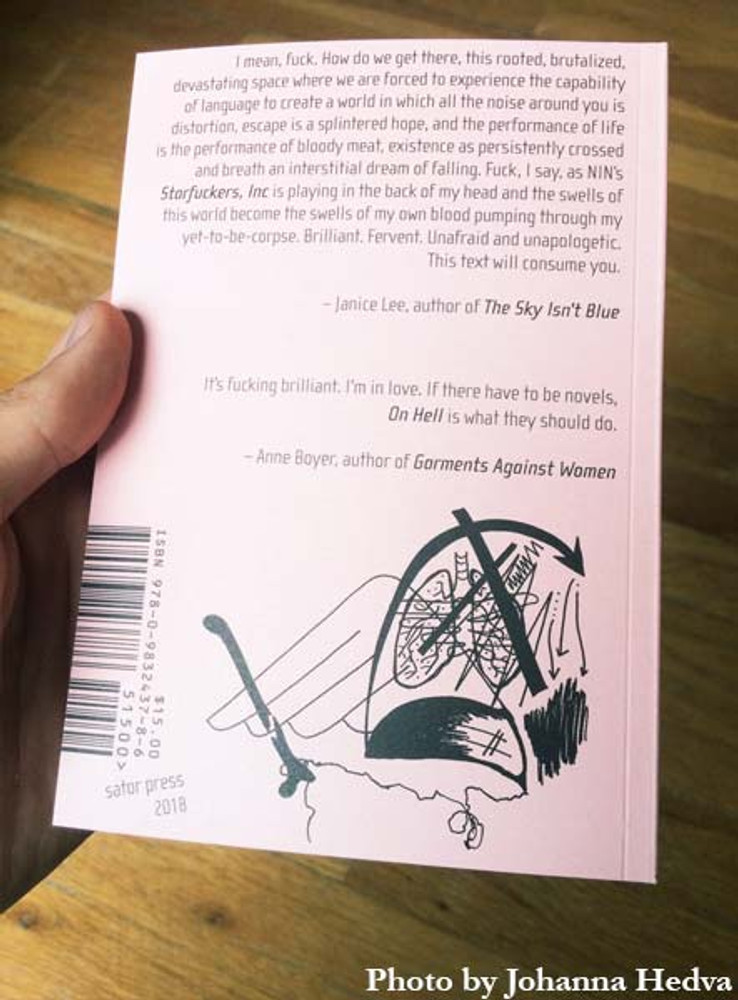 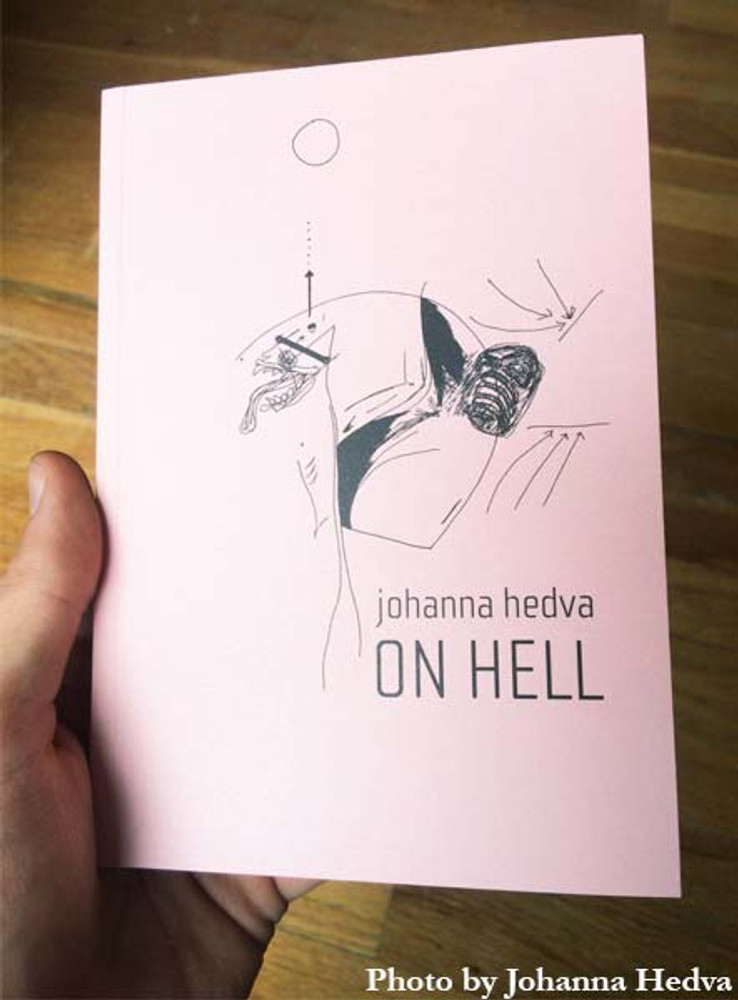 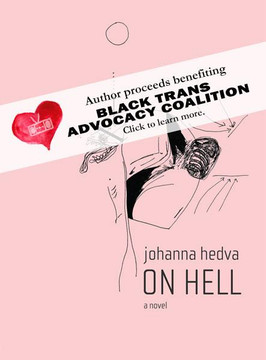 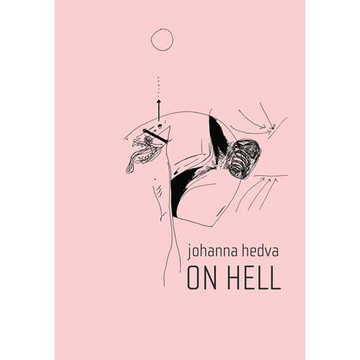 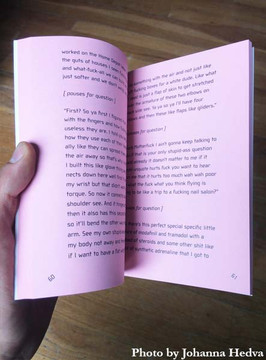 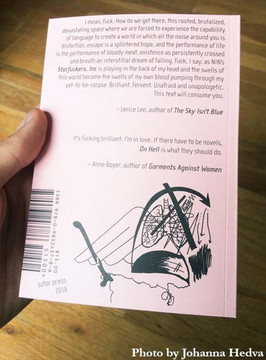 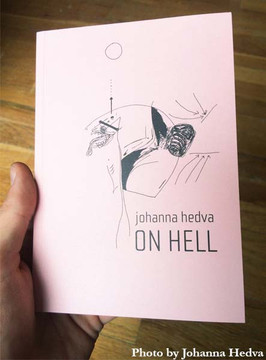 Author Statement:
for the entire month of june 2020, in honor of pride, i’m donating all proceeds from my book, On Hell, and my EP, The Sun and the Moon, to Black Trans Advocacy Coalition, which offers aid to the Black trans community in america, including free COVID-19 care packages, micro grants up to $125, and safe sex supply kits.

On Hell transcribes a body broken by American empire, that of ex-con Rafael Luis Estrada Requena, hacking itself away from contemporary society. Johanna Hedva, author of Sick Woman Theory, takes the ferocious compulsion to escape (from capitalism, from the limits of the body-machine, from Earth) and channels it into an evisceration of oppression and authority. Equal parts tender and brutal, romantic and furious, ON HELL is a novel about myths that trick and resist totalitarianism.

A Favorite Book of 2018.
—Dennis Cooper, Mine for yours: My favorite fiction, poetry, non-fiction, film, art, and internet of 2018 so far

"On Hell does what others only speculate about. The novel ports into fiction the concern with the body that was central to their groundbreaking and widely shared essay, ‘Sick Woman Theory.’ As with the essay, in On Hell, Hedva rearranges the components that make up our stories about how the world works, adjusts our vision. On Hell focuses on the body as a hackable thing, as limitation."
—Alex Gerrans, Overland

"I mean, fuck. How do we get there, this rooted, brutalized, devastating space where we are forced to experience the capability of language to create a world in which all the noise around you is distortion, escape is a splintered hope, and the performance of life is the performance of bloody meat, existence as persistently crossed and breath an interstitial dream of falling. Fuck, I say, as NIN’s Starfuckers, Inc is playing in the back of my head and the swells of this world become the swells of my own blood pumping through my yet-to-be-corpse. Brilliant. Fervent. Unafraid and unapologetic. This text will consume you."
—Janice Lee, author of The Sky Isn't Blue

"It’s fucking brilliant. I’m in love. If there have to be novels, On Hell is what they should do."
—Anne Boyer, author of Garments Against Women and A Handbook of Disappointed Fate

"On Hell is a story of a 21st-century Icarus-as-hacker, a wild dreamer who builds a set of wings from the internet woods. Hedva writes with fierce clarity on the perimeters of global power and the skyscraper stakes of truth, where “the money is closest to the sun,” and those confined to the prison-yard ground have a bird’s eye view to this endless machine of technology and body mass. This book thrives inside the meat of my terrors and the clouds of my hopes. It’s affirming to read work that recognizes technology as a real-life blood web that has the capacity to both free and enslave the human spirit."
—Nikki Wallschlaeger, author of Crawlspace

"Several pages into On Hell I realized the transcription of the despairing, brilliant anti-hero Rafael was fiction. 'Nah Mama!' he says to his nameless female interlocutor, never breaking from his obscenity-driven, body-hacking character while unfolding a maybe-allegorical 'biography.' The stairway to heaven, I've been told, is populated by angels who are both ascending from and descending to Earth. In On Hell, like in Wim Wenders' Wings of Desire, Hedva brings into question who is wearing the wings. Is it Rafael, whose angry, paranoid diatribes out-shimmy the orders of mental health and the rule of law? Or is it his mostly silent listener, who in receiving his anarchic, post-colonial fantasy loses her objective stance through identification? On Hell is one hell of a post-Matrix love story."
—Alexandra Grant, author of The Artists’ Prison

Entropy | 2/14/2018
Dan Bustillo and Johanna Hedva in conversation about On Hell
The author of On Hell dishes on topics as wide ranging as gender, gravity, dismantling oppressive systems of power, the themes that influenced their writing, and more. Read on!

Johanna Hedva is a Korean-American writer, artist, musician, and astrologer, who was raised in Los Angeles by a family of witches, and now lives in LA and Berlin.

Goodreads Reviews for On Hell