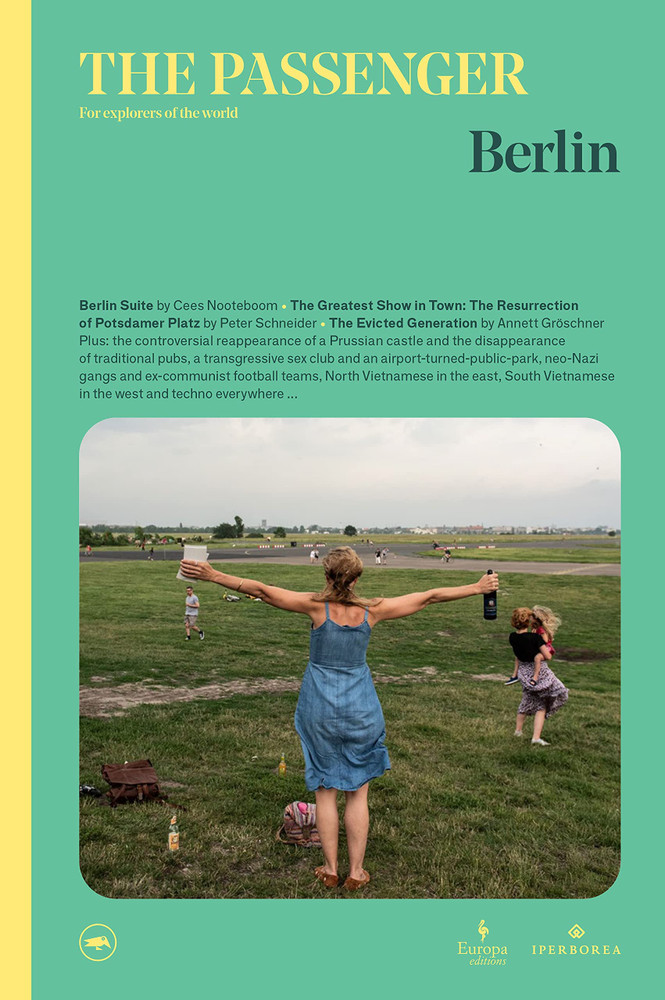 Fully-illustrated, The Passenger collects the best new writing, photography, art and reportage from around the world.

IN THIS VOLUME: When the Circus Came to Town: The Resurrection of Potsdamer Platz by Peter Schneider・Berlin Suite by Cees Nooteboom・Tempelhof: A Field of Dreams by Vincenzo Latronico・plus: the controversial reconstruction of a Prussian castle, Berlin’s most transgressive sex club and its disappearing traditional pubs, a green urban oasis, suburban neo-Nazis, North Vietnamese in the East, South Vietnamese in the West, techno everywhere and much more...

“Berlin is too big for Berlin” is the curious title of a book by the flaneur Hanns Zischler, who joked about the low population density of a city so spread-out and polycentric—one of the reasons why it still inspires feelings of freedom and space. But the phrase also carries a symbolic, broader meaning: how can a single city encompass and sustain such a weighty mythology as that of contemporary Berlin, “the capital of cool”?

In order to find out, it is necessary to travel to the 1990s, the origins of today’s Berlin, when time seemed to have stopped. The scars of a century of war were still visible everywhere: coal stoves, crumbling buildings, desolate minimarts, not a working buzzer or elevator. To visit the city then was a hallucinatory experience, a simultaneous journey into the past and into the future. The city’s youth seemed to have appropriated—and turned into a positive—the famous phrase pronounced by Karl Scheffler at the beginning of the 20th century: “Berlin is a place doomed to always become, never be.”

The abandoned ruins, the hidden gems found at the flea market, the illegal basement raves are a thing of the past. The era of Berlin as a site of urban archeology is over. Almost all the damaged buildings have been repaired, squatters have been removed, the shops selling East German furniture have closed down. Without its wounds, the landscape of the city is perhaps less striking but more solid, stronger. Even the city’s inhabitants have lost some of their melancholia, their romantic and self-destructive streak: today you can even find people who come to Berlin to actually work, not just to “create” or idle their days away. Yet, Berlin remains a youthful city that doesn’t cling to its “poor but sexy” past, whose only sacrosanct principles are an uncompromising multiculturalism and the belief that its future is yet to be written. To quote someone who knows the city well, Berlin is and always will be “pure potential.”

“The Passenger readers will find none of the typical travel guide sections on where to eat or what sights to see. Consider the books, rather, more like a literary vacation—the kind you can take without braving a long flight in the time of Covid-19.”—Publishers Weekly

“A wonderful publication and a beautiful object. The Passenger is a pleasure to read, to hold, and to look at.”—La Repubblica

“A must-read. Much more than a travel guide, The Passenger is indispensable for any reader who is curious about the world.”—Il Venerdì

“A true delight for lovers of reading and travel.”—El País