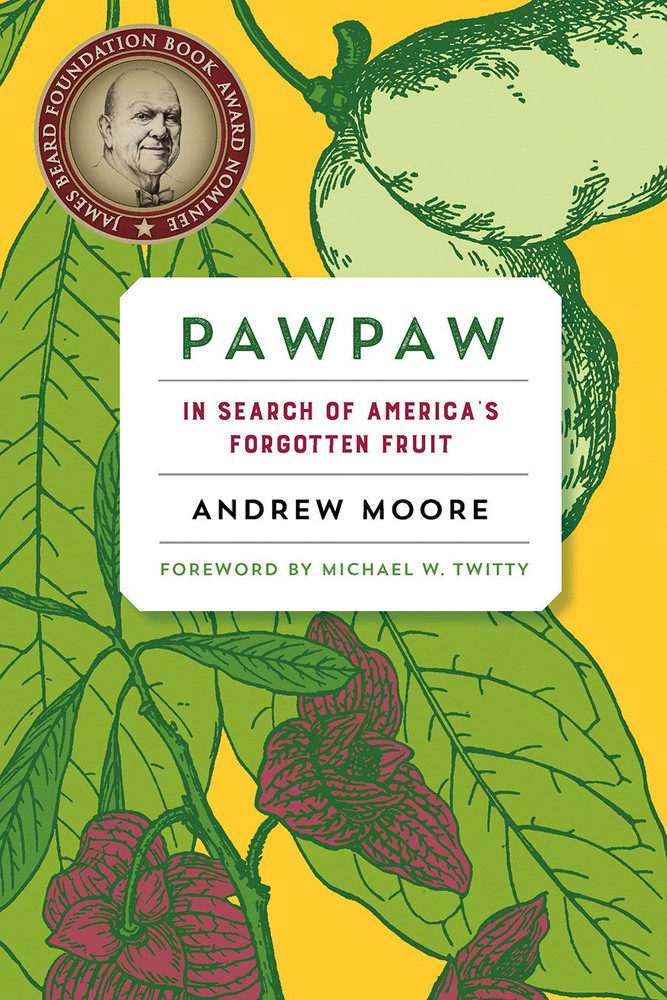 The largest edible fruit native to the United States tastes like a cross between a banana and a mango. It grows wild in twenty-six states, gracing Eastern forests each fall with sweet-smelling, tropical-flavored abundance. Historically, it fed and sustained Native Americans and European explorers, presidents, and enslaved African Americans, inspiring folk songs, poetry, and scores of place names from Georgia to Illinois. Its trees are an organic grower’s dream, requiring no pesticides or herbicides to thrive, and containing compounds that are among the most potent anticancer agents yet discovered.

So why have so few people heard of the pawpaw, much less tasted one?

In Pawpaw―a 2016 James Beard Foundation Award nominee in the Writing & Literature category―author Andrew Moore explores the past, present, and future of this unique fruit, traveling from the Ozarks to Monticello; canoeing the lower Mississippi in search of wild fruit; drinking pawpaw beer in Durham, North Carolina; tracking down lost cultivars in Appalachian hollers; and helping out during harvest season in a Maryland orchard. Along the way, he gathers pawpaw lore and knowledge not only from the plant breeders and horticulturists working to bring pawpaws into the mainstream (including Neal Peterson, known in pawpaw circles as the fruit’s own “Johnny Pawpawseed”), but also regular folks who remember eating them in the woods as kids, but haven’t had one in over fifty years.

As much as Pawpaw is a compendium of pawpaw knowledge, it also plumbs deeper questions about American foodways―how economic, biologic, and cultural forces combine, leading us to eat what we eat, and sometimes to ignore the incredible, delicious food growing all around us. If you haven’t yet eaten a pawpaw, this book won’t let you rest until you do.

"I’m always eager to read a talented writer’s first book. For one thing, it’s full of the infectious passion for the subject that usually drives someone to write it in the first place. But more than that, authors devote to such books the kind of attention usually reserved for a firstborn child―they are scrutinized and fretted over to the finest detail. Pawpaw, a heartfelt paean to a native North American tree with edible fruits, is just such a book. I have been growing pawpaws since 1970, but never realized how much I didn’t know about the tree until reading Andrew Moore’s book. A skilled storyteller, Moore delves deeply into the world of pawpaws while managing to hold the reader’s interest through detail after detail. History, folklore, biology, taxonomy, hybridization, and everything else from slave sustenance to biochemical research are blended here.”--Guy Sternberg, The American Gardener

"The pawpaw, also sometimes called the poor man’s banana, is a common fruit growing in temperate zones across the U.S., yet it is rarely seen in the produce aisles. Hoping to shed more light on this culinary mystery, as well as inspire consumers and growers to make the fruit popular again, first-time author and gardener Moore offers both an engaging history and a thorough cultivation guide to the pawpaw. According to Moore, the shrub-like, large-leafed pawpaw tree typically grows in clumps near river bottoms along a belt running from northern Missouri to southern Louisiana and east as far as the Atlantic Ocean. Although historically pawpaw was eaten by Native Americans and slaves, it probably owes its marketplace anonymity to a short shelf life and widely variable flavors. While it remains to be seen whether Moore’s well-written paean to the pawpaw will inspire increased production and distribution to grocery stores, uninitiated readers will be intrigued enough to want to sample the fruit at the first opportunity.”

“Here is proof that culinary odysseys don’t always need to involve globetrotting or the pursuit of rare, exotic foodstuffs. But, then again, in his pursuit of the lowly American pawpaw, Andrew Moore reminds us that America was once considered an exotic destiny on its own, and has always had more than its fair share of culinary rarities.”--Damon Lee Fowler, author of Essentials of Southern Cooking and Beans, Greens, & Sweet Georgia Peaches

“Tropical growers have many shade crops to choose from, like cacao and coffee. Here in eastern North America we have our own luscious fruit for shady places―the pawpaw. Andrew Moore’s Pawpaw tells the story of this fruit and the people working to bring it to our gardens, markets, and restaurants. It’s the story of an eastern native fruit on its way to domestication, finally earning the place in our hearts and our cuisine that it deserves.”--Eric Toensmeier, author of Paradise Lot and Perennial Vegetables

"Andrew Moore has done an amazing job demystifying one of America’s most misunderstood and neglected fruits. Pawpaw deftly navigates between his own personal journey and the facts and history of the fruit, leaving readers―including chefs interested in heritage and tradition―with a true sense of how important it is to embrace this indigenous treasure."--Travis Milton, chef and co-owner of Shovel and Pick, Richmond, Virginia

“This book took me on an enchanting and engaging ride through the history, folklore, and science of a neglected but magical food plant. Andrew Moore shows us, in delightful prose and a wealth of fascinating stories, the role that the under-appreciated pawpaw has played in North American culture. I was constantly surprised to learn of the quiet influence the pawpaw has had on the people and environment around it, and like the author, am hopeful that it can find its rightful place among the better-known fruits that we all love.”--Toby Hemenway, author of Gaia’s Garden and The Permaculture City

“Like a gumshoe detective, Andrew Moore tracks down a mystery at once horticultural and culinary: Why is the pawpaw, America’s largest indigenous fruit, so little known? The answer, like the fruit’s beguiling taste, proves multi-layered and slippery, and after reading Moore’s engaging account, I’m ready to light out for pawpaw country myself in search of this homegrown original.”--Langdon Cook, author of The Mushroom Hunters: On the Trail of an Underground America

“This book is a love song, singing the praises of a unique, delicious, and once-abundant fruit that has been sadly neglected. Andrew Moore takes us on a very personal journey investigating how and why North America's largest indigenous fruit largely disappeared, and documenting efforts to revive it. Pawpaw is a pleasure to read, and if you do you'll probably find yourself searching for and loving these delectable fruits.”--Sandor Ellix Katz, author of The Art of Fermentation

“America, get ready for pawpaw mania! Andrew Moore’s book tells the definitive story of the wild fruit that is part of our nation’s heritage, and in the process the author joins the ranks of food-preservationist heroes. Prepare to be overwhelmed with longing for the sweet scent and taste of the pawpaw.”--Poppy Tooker, host of Louisiana Eats!

“Pawpaw: In Search of America’s Forgotten Fruit is a fun and well-researched, informative romp through the culture and horticulture of this uncommon fruit. Uncommon, yes, but who would have imagined that there were and are quite a few other pawpaw nuts out there? If you don’t know pawpaws, you should, and you will.”--Lee Reich, PhD, author of Uncommon Fruits for Every Garden

Andrew Moore grew up in Lake Wales, Florida, just south of the pawpaw’s native range. A writer and gardener, he now lives in Pittsburgh, Pennsylvania. He was the news editor and a feature writer for Pop City, a weekly news e-magazine in Pittsburgh, and his stories have been published in the Pittsburgh Post-Gazette, The Daily Yonder, and the Biscayne Times. Pawpaw is his first book.

Swim Through the Darkness: My Search for Craig Smith and the Mystery of Maitreya Kali