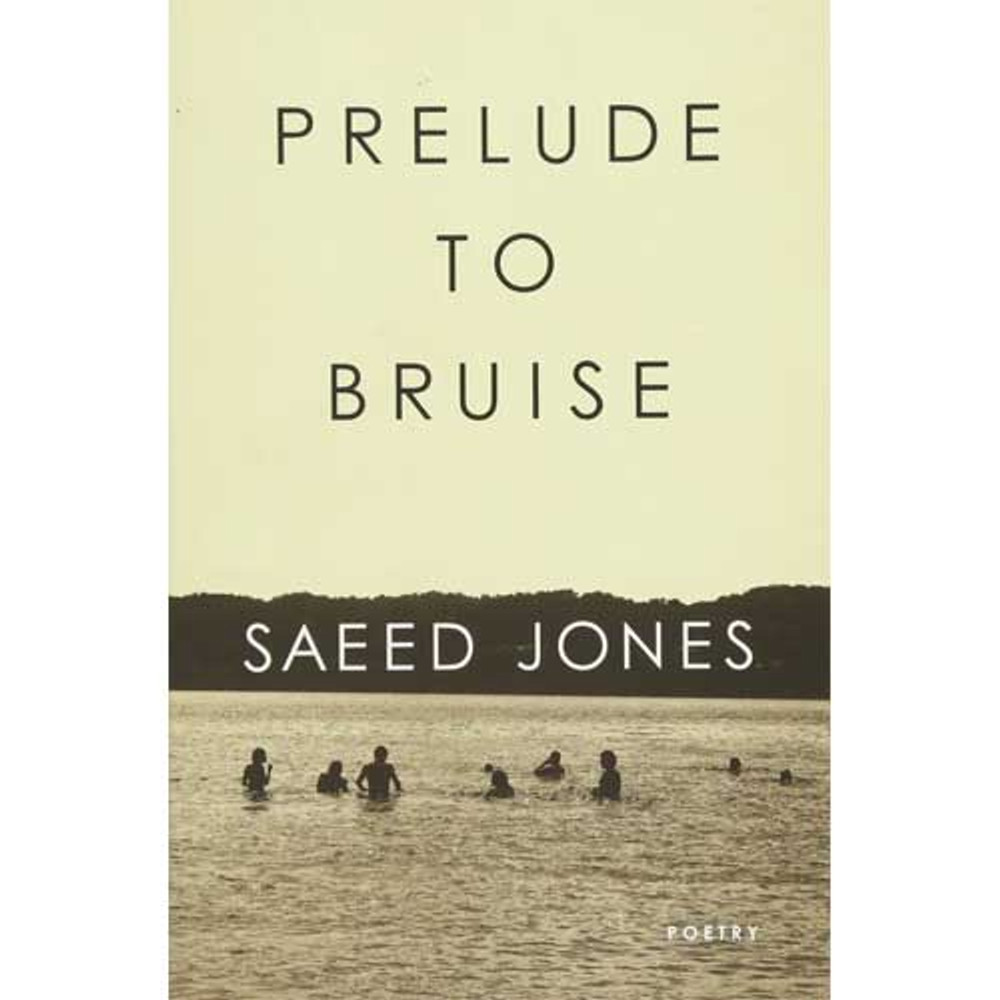 "In his debut collection, Jones has crafted a fever dream, something akin to magic. . . Solid from start to finish, possessing amazing energy and focus, a bold new voice in poetry has announced itself"―Publishers Weekly, Starred Review

"Jones had a meteoric rise to literary prominence in the past year. . . . the poems of this book are harrowing and heartbreaking, treating family, sexuality, and race with unrelenting intensity."―Publishers Weekly

"A debut poetry collection examining identity in all its forms―racial, sexual, geographical, and more―with both incisive intensity and tenderness."―Off the Shelf

"[T]he way these poems address violence, life in the south, race, sexuality and relationships makes for an engrossing read best consumed in as few sittings as possible."―Time

"This book leaves your body transformed in a way that poetry should." ―ElevenEleven

"This is indeed a book seamed in smoke; it is a dance that invites you to admire the supple twist of its narrative spine; it is hard and glaring and brilliant as the anthracite that opens the collection: 'a voice mistook for stone, / jagged black fist.'" ―NPR Book Review

"The features that distinguish his poems from prose ―brevity, symbolism, implication ― let him investigate the almost unsayable."―Los Angeles Times

"Perhaps the readiest, most painfully assured debut of the decade."―Flavorwire

"The poems in Prelude to Bruise enflame, with all flame's consequences of wounding and illumination . . . It's a story of the forces of destruction―the destruction of black bodies and black selves―built into America, and it surfaces in the lines of lust, violence, possession, and power." ―Rain Taxi

"This book is so good it will give you night sweats."―Greenlight Bookstore

"Prelude to Bruise is a harrowing examination of masculinity and femininity as a 'brutal' performance."―Buzzfeed

"Jones' sentences bristle with foreboding . . . Jones seems to be playing with the idea of the nature of man, of those who live closer in tune with the laws of nature than with those of humanityJones, like great poet-novelists, fills his book with beautiful sentences."―Electric Literature

"Prelude to Bruise is an airtight collection of visceral and stunning poems."―Mosaic Magazine

"Prelude to Bruise by Saeed Jones, a tome of searing poetry about what it means to be Black, gay, Southern and so much more"―Refinery 29

"Prelude to Bruise Saeed Jones is a powerful collection . . . with a high level of craft, emotion and metaphor."―Ebony

"Jones uncovers what exactly is at stake when one presents oneself authentically, when one insists on being oneself regardless of the consequences."―Coldfront

"Prelude to Bruise was published by Coffee House in August to widespread (and deserved!) acclaim."―Electric Literature

"It packs a wallop . . . I found myself in awe."―Raging Biblio-holism

"I didn't exactly mean to survive myself,' writes the African-American poet Saeed Jones, and the line comes to my mind: what it means to have survived official policies designed to erase you, and the kind of impulse to self-destruction that might arise in the face of this."―The Monthly(Australia)

"His work is imaginative and lyrical while maintaining a self-proclaimed ferocity, as if there could really be any other kind, that challenges conventions of masculinity and race in a deeply emotional way."―Dazed, "The top ten American writers you need to read this year"

"Maybe the best collection you will read this year, Jones is a poet who also understands how to tell a story, obviously keeping his feet planted in the former since poetry is his craft, but giving the reader so much more to unpack page after page. At times harrowing, Jones succeeds at never straying too far away from beauty and light, and that balance makes this a true reading experience."―Vol. 1 Brooklyn September Books Review

"Saeed Jones may be one of the most necessary poets of our time." ―July Westhale, Lambda Literary

"Prelude to Bruise is a book with a controlled realm of imagery, which creates this really beautiful territory for the reader to explore."―Ace Hotel

"Beautiful, haunting and heartbreaking―Jones's poems are an emotional punch to the gut. A lyrical shock to the system."―Lambda Literary

"What these poems show us is the necessity of owning that longing, the refusal to let the wounds the world has laid upon us turn inward, into our shame, our silence. To show the world the face that the world has made."―Muzzle Magazine

"Saeed Jones brought the audience to a near swoon."―Twin Cities Daily Planet

"Prelude to Bruise is an airtight collection of visceral and stunning poems."―Mosaic Magazine

"I was bowled over by Saeed Jones's Prelude to Bruise (Coffee House Press, #16), a beautiful and biting collection of poetry that has been making waves in the US. Investigating race, sexuality and what it means to be southern, Jones's lean, searing lines transcend identity politics."―New Statesmen (UK)

"Poetry book most likely to win over your poetry-avoiding friends: Prelude to Bruise by Saeed Jones"―Time Out New York,"The Best Books of 2013"

"Jones is responsible for a growing portion of the gay narrative being written online, and the Internet is a much better place for it. His voice will have even more impact with his upcoming debut, which will explore the collision of race, sexuality and identity."―The Root, "30 Viral Voices Under 30"

"For years now the Buzzfeed LGBT editor has been lighting it up at his day job, and also on Twitter, with a ferocity befitting his name. Now, after earning praise from D.A. Powell and after winning a NYC-based Literary Death Match bout, Jones will use his debut collection to prominently display his poetry chops."―The Millions

"This powerful collection feels at times like a blow to the throat, but when we recover, the air is sweeter for having been absent."―Guernica

"A work of insight and great beauty, Jones' first poetry collection manages to be both ferocious and and subtle."―Brooklyn Magazine

"It's a book about identity that expands beyond the borders of the terms we use to cordon off safe spaces."―Dialogist

"[A] stunning debut collection of one of America's most promising young poets. . . These poems lacerate as they heal, making us feel the resilient intensity of a protagonist who says, 'I didn't exactly mean to survive myself."―The Journal

"Saeed Jones has created a radically different coming of age narrative distinctly his own through forceful, original poetry."―Lonesome Reader

"[A] daring, ferocious, and often impossibly gorgeous meditation on boyhood and personhood, language and love."―Flavorwire, "10 New Must Reads for September"

"The first book of Saeed Jones's poetry, Prelude to Bruise, reads with astonishing momentum and tenacity, a lyrical torch thrust into shadows and silence to illuminate pain from a history of wounds." ―Shelf Awareness

"Jones has a voice, and it is not plucky or regretful. It is not about being a 'man' ― it's more ambitious. This book is his credo, his aspiration. Convert or abstain, his 'hunger [does] not apologize.'"―Poets at Work

"For their journey on this beautifully clear but sweltering Saturday afternoon, they were not disappointed, treated to over a dozen readings of vintage O'Hara poems, as well as new poems written by the likes of Saeed Jones, author of Prelude to Bruise and the editor of Buzzfeed LGBT" ―Huffington Post

"You may know Saeed Jones as the Buzzfeed's Literary Editor, but you definitely should get to know him for his poetry as well."―Bustle

"These poems are tightly constructed, scary-beautiful, and lyrically brilliant, driven by a raw and devastating emotional power. He awes me."―The Millions

"Saeed Jones begins this electrifying book―one of the most exciting debut collections I've read in years―with a quotation from Kafka's notebooks: 'The man in ecstasy and the man drowning―both throw up their arms.' It's a powerful opening for these searing poems." ―Towleroad

"In his first book of poetry, Jones blazes forth, his voice new, potent, lyrical, and deadly beautiful. Enveloping his words in the body, its politics, its genders and colors, the legacy of its trials and abuse, Jones sings truths from the perimeter, the disenfranchised, the ready to be heard."―Bookshop Santa Cruz

"Jones' haunting lyricism creates a portrait of hard-won self-realization, of a young man's determined struggle, pushing through doubt and distress with the strength of his imagination and verve." ―NBCC's Critical Mass

"I had to stop trying to read Saeed Jones's debut, Prelude to Bruise, on the subway to avoid yelping with joy, weeping, or getting all hot and bothered in public."―Work in Progress

"Prelude to Bruise is a thunderous title for a first collection. It promises that a bruise will come later. It says that, even when we feel like we're drowning, we can still be ecstatic."―The Brooklyn Rail

"This is the type of book that merits clichéd hyperbole: because it will actually 'leave you floored,' 'feeling naked' (together, that's almost a Natalie Imbruglia lyric!), and 'gasping for breath.'―Flavorwire

"A radical standard of pain acknowledges the intersection between individual and collective histories of suffering. This radical standard is the thrust of works like . . . Saeed Jones' Prelude to Bruise, a collection of poems that narrates the wounds of a black gay boy in the American South."―Pacific Standard

"Poems like 'Post Apocalyptic Heartbreak,' 'History According to Boy,' 'Prelude to Bruise,' and others will break your heart and force you to investigate and confront the unconscionable brutality of this nation."―MELO

"Saeed writes about blackness and gayness, fierce and thick and brave in every poem."―Medium

"Saeed Jones is one of the English department's most distinguished graduates."―WKU Herald

Saeed Jones is the author of the chapbook When the Only Light is Fire (2011, Sibling Rivalry Press). His work has appeared in Best Gay Stories 2013 , Guernica , Ebony Magazine , The Rumpus , Hayden's Ferry Review and West Branch among other publications. Jones received his MFA in Creative Writing at Rutgers University Newark and is the recipient of fellowships from Cave Canem and Queer / Arts / Mentors. He works as the editor of BuzzfeedLGBT and lives in Harlem.