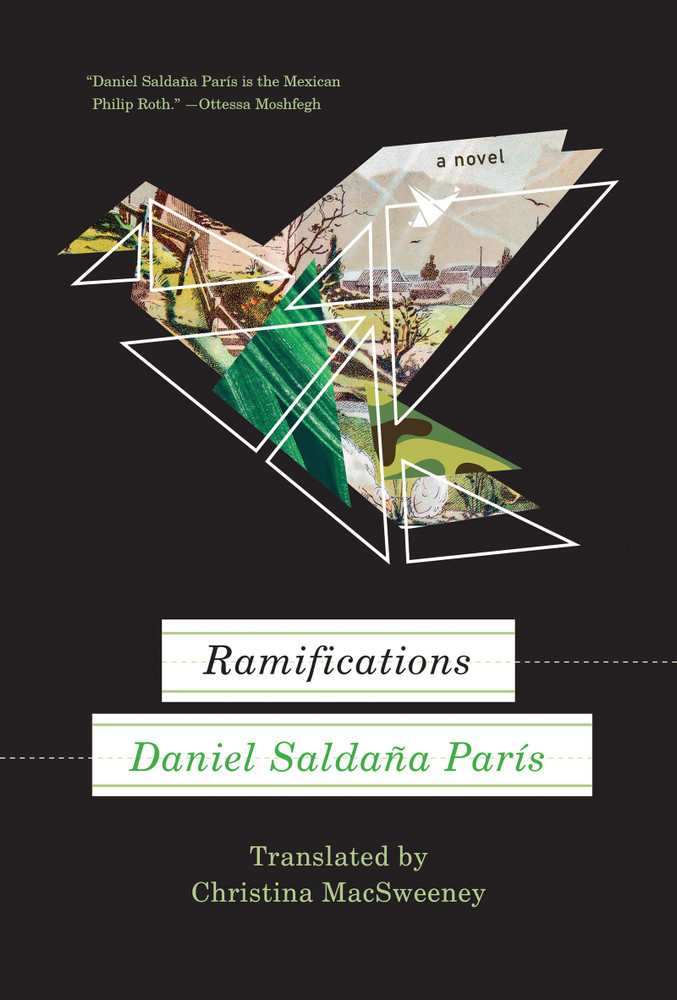 Folding and refolding origami frogs, extracting the symmetrical veins from leaves, retreating to an imaginary world in his closet: after Teresa walked out the door one July afternoon in 1994, her son filled the void she left with a series of unusual rituals. Twenty-three years later, he lies in bed, reconstructing the events surrounding his mother's disappearance. Did she actually join the Zapatistas in the jungles of Chiapas, as he was led to believe? He dissects his memories of that fateful summer until a startling discovery shatters his conception of his family's story. Daniel Saldaña París (Among Strange Victims) returns with an emotionally rich anti-coming-of-age novel that wrestles with the inherited privileges and crimes of masculinity.

The Millions, “Most Anticipated”

“A Dostoyevskian tale set in the Mexico City of today.” —Kirkus

“In Daniel Saldaña París’s resonant novel Ramifications, an eventful summer has ripple effects that last decades. . . . a rich, smart, and satisfying rendering of abandonment and loss, whose effects reverberate through time.” —Foreword Reviews

“[A] sinister little book suffused with a biting humor and morbid curiosity. This 'mom-gone-missing’ story reels you in only to ensnare you into the dark corners of a neurotic young man’s mind. I couldn't help but fall completely headlong into this rousing carousel of toxic machismo and emotional depravity—more please!” —Uriel Perez, BookPeople

Praise for Among Strange Victims

"Brief, brilliantly written, and kissed by a sense of the absurd. . . . Like a much lazier, Mexico City version of Dostoevsky's Underground Man." —NPR Fresh Air

"Great fun are the jabs at academia, Mexico City and the dusty town where the action, or inaction, moves after Rodrigo meets Marcelo, a Spanish cretin with a Ph.D. in aesthetics. These flameless flâneurs humph and hump, personifying urban malaise." —New York Times Sunday Book Review

"Full of odd twists and surprises. Among the high points are Saldaña París' exasperated but affectionate paeans to 'the immense, beautiful city' that is Mexico's capital. Though a study of slothfulness and its discontents, a welcome book on which the author has clearly expended energy." —Kirkus

“The novel takes some bizarre turns as Marcelo leads Rodrigo into experiments involving drugs, tequila, hypnosis and more, all in the name of transformation. If the young man’s notion of radical change is to take part in his life rather than observe it from afar, he’s off to a good start.” —New York Times

"Saldaña París's first novel to be translated Stateside is a leisurely story of slacking off that's nicely conveyed in a sharp, cynical tone. . . . Read this messy, shaggy picaresque for its ample page-by-page pleasures, which include devilishly clever syntax, a charming tendency to digress, and satisfying flashes of Rodrigo and Marcelo getting their act together." —Publishers Weekly

"For all Saldaña París' sharp wit, Among Strange Victims is about waking up to the world’s brighter possibilities." —NPR

Daniel Saldaña París is an essayist, poet, and novelist born in Mexico City. His first novel, Among Strange Victims, published to critical acclaim in 2016, was a finalist for the Best Translated Book Award. He has been a fellow at Union des Écrivaines et des Écrivains Québécois, the Omi International Arts Center, The Banff Centre, and The MacDowell Colony. His work has appeared in BOMB!, Guernica, Literary Hub, Electric Literature, The Guardian, El País, and on KCRW’s Unfictional, among others. In 2017 he was named by the Hay Festival as one of the best Latin-American writers under the age of 40.

Christina MacSweeney was awarded the 2016 Valle Inclán Translation Prize for her translations of Valeria Luiselli's The Story of My Teeth, and her translations of Daniel Saldaña París's novel Among Strange Victims was a finalist in the 2017 Best Translated Book Award. In 2017 she published a translation of Elvira Navarro's A Working Woman, followed in 2018 by Empty Set (Verónica Gerber Bicecci), and Tomb Song and The House of the Pain of Others (Julián Herbert), all of which have received critical acclaim. Her work has also been included in various anthologies of Latina American Literature. Christina also collaborated with Verónica Gerber Bicecci on the bilingual book Palabras migrantes / Migrant Words. Her translations of Bring Me the Head of Quentin Tarantino (Julián Herbert), On Lighthouses, a book-length essay by Jazmina Barrera, and Elvira Navarro’s short story collection Rabbit Island are forthcoming in 2020.