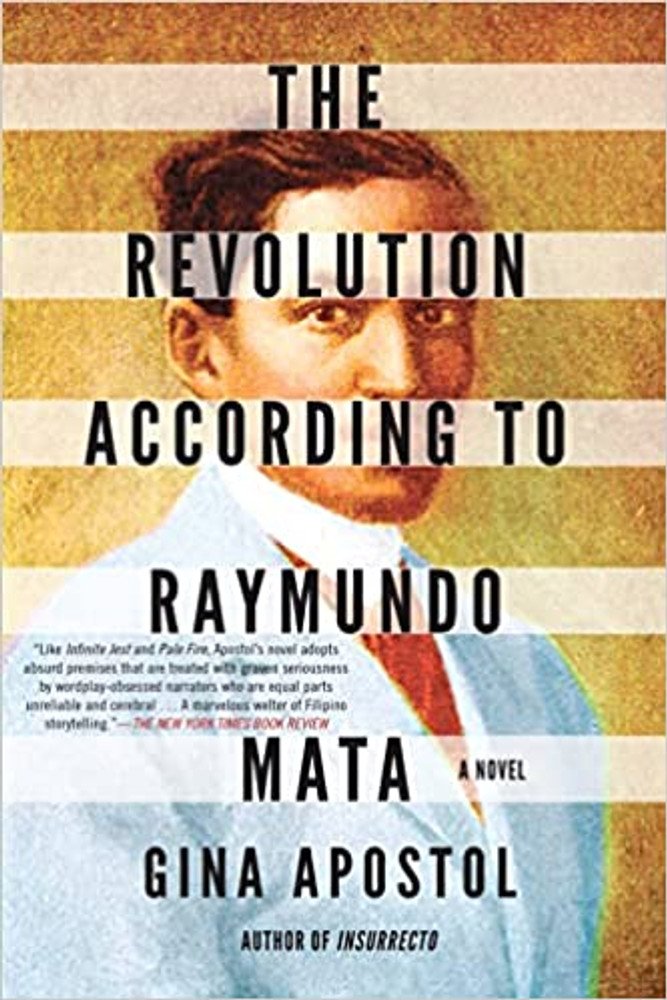 Revolution According to Raymundo Mata

Revealing glimpses of the Philippine Revolution and the Filipino writer Jose Rizal emerge despite the worst efforts of feuding academics in Apostol’s hilariously erudite novel, which won the Philippine National Book Award.

Gina Apostol’s riotous second novel takes the form of a memoir by one Raymundo Mata, a half-blind bookworm and revolutionary, tracing his childhood, his education in Manila, his love affairs, and his discovery of writer and fellow revolutionary, Jose Rizal. Mata’s 19th-century story is complicated by present-day foreword(s), afterword(s), and footnotes from three fiercely quarrelsome and comic voices: a nationalist editor, a neo-Freudian psychoanalyst critic, and a translator, Mimi C. Magsalin.

In telling the contested and fragmentary story of Mata, Apostol finds new ways to depict the violence of the Spanish colonial era, and to reimagine the nation’s great writer, Jose Rizal, who was executed by the Spanish for his revolutionary activities, and is considered by many to be the father of Philippine independence.

The Revolution According to Raymundo Mata offers an intoxicating blend of fact and fiction, uncovering lost histories while building dazzling, anarchic modes of narrative.

Praise for The Revolution According to Raymundo Mata

“Gina Apostol’s The Revolution According to Raymundo Mata weaves the complex tangle of Philippine history, literature, and languages (along with contemporary academic scholarship) into a brilliant tour de force of a novel. Brava!”
—John Barth

“Virgil should offer libations to the gods in thanksgiving that Gina Apostol writes about the Philippines’ founding stories instead of Rome’s. Her latest novel to appear in the United States, The Revolution According to Raymundo Mata, wreaks playful and learned havoc on the life and work of the 19th-century writer Jose Rizal . . . [Apostol] writes historical fiction like Hilary Mantel on acid.”
—Randy Boyagoda, The New York Times Book Review

“Make no mistake, The Revolution According to Raymundo Mata by Gina Apostol is a classic, a novel that is brilliantly conceived and flawlessly executed. “
—Peter Bacho, International Examiner

“[A] genre-bending historical novel that blurs the line between fact and fiction, presented as the memoir of Raymundo Mata, a 19th-century revolutionary who crosses paths with famed Filipino writer and national hero José Rizal, complete with feuding annotations from a nationalist editor, a psychoanalyst, and a translator.”
—BuzzFeed

“A masterful work of historical fiction set in the country on the cusp of a revolt that would end nearly four centuries of Spanish colonial rule.”
—The Nation

“Gina Apostol tells our revolutionary history—or fragments of our history—using a pastiche of writing from the academe, a diary, stories within stories, jokes, puns, allusions, a virtual firecracker of words. Her novel is fearlessly intellectual, anchored firmly on the theories of Jacques Lacan. But it is also funny and witty as it picks—lice, nits, and all—on the hoaxes in our history. It affirms, if it still needs to be affirmed, the power of fiction to shape and reshape the gaps in the narratives of our history as a nation. The main character here is History, and its protagonist, Imagination. For this audacious sword-play of a novel, the National Book Award is given to Gina Apostol’s The Revolution According to Raymundo Mata.”
—Judges' Citation, Philippine National Book Award

“Apostol’s novel requires us to sit up, lean in, and study. It demands our active participation. In the end, The Revolution According to Raymundo Mata is intended for a Filipino audience first—with inside jokes, play on words, and regional references—and American audiences second. And that’s a definitive reason to pick it up. Apostol holds a mirror to American exceptionalism and forces us to look.”
—Ploughshares

“Filipina-American novelist Gina Apostol explores the father of Filipino literature and the movement for independence which he embodied in her darkly comic new novel . . . With shades of Roberto Bolaño and Vladimir Nabokov, she writes that her novel was ‘planned as a puzzle: traps for the reader, dead end jokes, textual games, unexplained sleights of the tongue.’”
—The Millions

“Inventive . . . Excavating the history of the oppressive Spanish colonial era in a meta narrative laden with diary entries, wordplay and puzzles — complete with footnotes from an imaginary editor.”
—Everything Zoomer

“The Revolution According to Raymundo Mata is certainly a wild ride, playful without let-up but often to serious purpose.”
—The Complete Review

“Beyond the questions of national identity the novel raises, Mata is simply funny — richly satirical of psychology and history, and of the PoMo gestures that it embraces.”
—On the Seawall

“Highly entertaining . . . The narrative is studded with hilarious argumentative footnotes between an editor, a translator, and a scholar of Mata’s work, producing dueling Nabokovian narratives . . . Apostol’s unique perspective on facts versus fiction would make for a perfect Charlie Kaufman movie.”
—Publishers Weekly, Starred Review

“Edward Said wrote that the role of the intellectual is to present alternative narratives on history than those provided by the ‘combatants’ who claim entitlement to official memory and national identity—who propagate ‘heroic anthems sung in order to sweep all before them.’ In this fearlessly intellectual novel, Gina Apostol takes on the keepers of official memory and creates a new, atonal anthem that defies single ownership and, in fact, can only be performed by the many—by multiple voices in multiple readings. We may never look at ourselves and our history the same way again.”
—Eric Gamalinda, author of My Sad Republic

Gina Apostol is the PEN Open Book Award–winning author of Gun Dealers' Daughter, as well as a two-time winner of the National Book Award in the Philippines for her novels Bibliolepsy and The Revolution According to Raymundo Mata. Her short stories have appeared in various anthologies and journals including The Gettysburg Review and the Penguin anthology of Asian American fiction, Charlie Chan Is Dead, Volume 2.