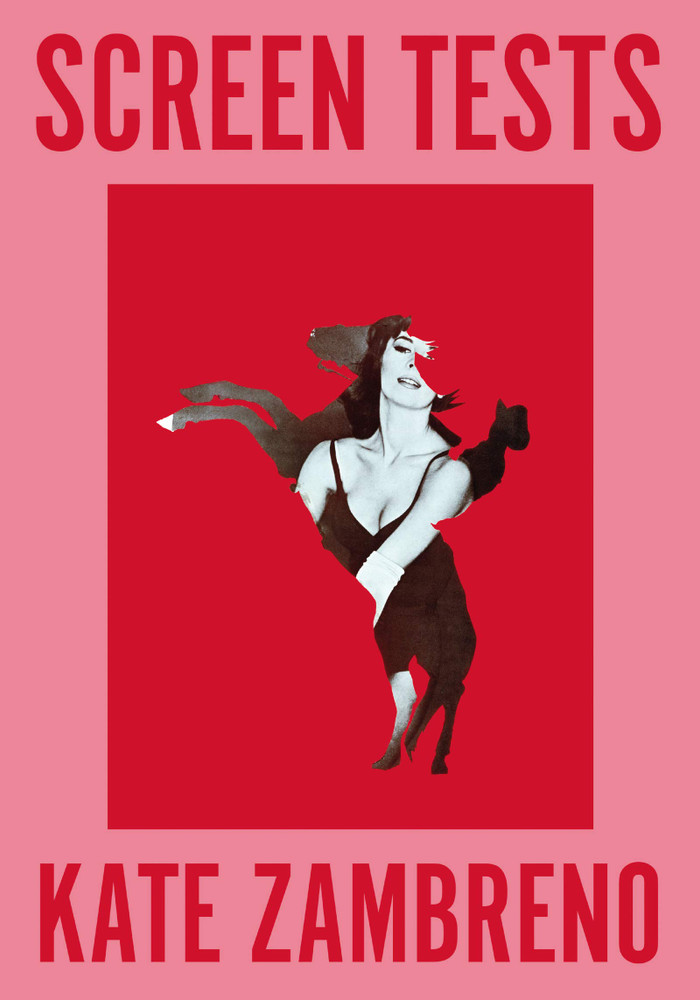 A new work equal parts observational micro-fiction and cultural criticism reflecting on the dailiness of life as a woman and writer, on fame and failure, aging and art, from the acclaimed author of Heroines, Green Girl, and O Fallen Angel.

In the first half of Kate Zambreno’s astoundingly original collection Screen Tests, the narrator regales us with incisive and witty swatches from a life lived inside a brilliant mind, meditating on aging and vanity, fame and failure, writing and writers, along with portraits of everyone from Susan Sontag to Amal Clooney, Maurice Blanchot to Louise Brooks. The series of essays that follow, on figures central to Zambreno’s thinking, including Kathy Acker, David Wojnarowicz, and Barbara Loden, are manifestoes about art, that ingeniously intersect and chime with the stories that came before them.

“In the first part of this book, fifty-eight micro-fictions eulogize the figures whose lives and work are a balm for the disillusioned author. Susan Sontag, John Wayne, Valerie Solanas, and Elena Ferrante all inspire the narrator’s meandering meditations on writing, aging, and failing. In the second section, four previously published essays reprise scenes from the first and consider life at the margins of society. As a published author, Zambreno frets over her own Wikipedia page and Googles herself compulsively, pitting a desire for success against her fascination with failure. The two sections cohere pleasingly, playing with the sometimes artificial distinction between fiction and nonfiction.” (The New Yorker)

“I brought Screen Tests to the beach one weekend, and I couldn’t stop reading lines aloud. My friend, who is fortunately just as obsessed with good words, listened patiently as I picked them out: “The temporary clanging together of two fucked-up people.” “Thinking of the ways nostalgia can also be a disease.” “When we are stuck, we look to other signs and systems to be okay in the world. To relieve the burdens of personhood.” Zambreno’s very strange essay collection is full of these kinds of linguistic sucker punches. Her tight focus on the characters that wander through her inner brain sanctum—Meg Ryan, Susan Sontag, David Wojnarowicz, Kathy Acker—lets her build a thematic framework that touches on rejection, depression, and the precariousness of art, and that feels more familiar the deeper you get.” (Vanity Fair, Editors’ Pick)

“Screen Tests is invested in issues of fame and public self-presentation, how the brilliant and the mundane collide in the itch of ambition, how a career haunts, beckons, and erodes the self at its center. Zambreno has deftly found a form that embodies that palpitating quality of being a fan, having a crush, poring over images that might help in the project of being a person.” (The Nation)

“Kate Zambreno writes with a winning, gleeful transparency about days and nights spent entranced by literature, film, and her own densely populated imagination. Zambreno pays attention to her own desire’s fluctuations—to attachments, moods, self-constructions, and self-abasements, reconfigured in a series of shadow-box homages to writing as an asymptotic specter. In rhythm-conscious bulletins, streaked with passionate candor, she confirms her vocation as haunter and as haunted.” (Wayne Koestenbaum)

“These stories and essays are layered and build as a Goldin-esque slideshow of textual stills that, often through other art and artists’ lives, explore the book’s central first person voice as private figure, as public figure, as member of the (abstract) writing “community”, as mother, as an aging (female) body, as a person who has escaped their idea of nothingness through dedication to and persistence in making work.” (Jen George)

“A wide-ranging collection of stories and other writing snippets that manage to possess both urgency and a feeling of smallness, all the better to stick inside you with the precision of a splinter. Like Zambreno’s other work, Screen Tests feels vaguely confrontational in the best possible way; it’s a challenge to readers to interrogate the ways they think about things like aging, art, celebrity, and productivity. It’s also a delight; I dog-eared countless of its pages, always finding new moments of recognition, feeling the same kind of glee as when I discover a new friend shares a particular obsession of mine.” (Kristin Iversen, Nylon )

“A master of the experimental lyric essay.” (Publishers Weekly (starred review of The Appendix Project))

“The small works, which combine the concision of Lydia Davis with the satirical wit of Thomas Bernhard, may appear to be a new flash form for the novelist. But on a second look, they are a natural extension of her practice: art world adjacent explorations of our cultural landscape. [Zambreno’s] writing often feels like an automatic act, her essays speculative, fluid—fugitive even—and utterly unpindownable.” (Interview)

“Kate Zambreno’s work has encompassed both comprehensive examinations of the lives of artists and blistering forays into fiction. With Screen Tests, she juxtaposes the two, offering readers both autobiographical stories and essays inspired by fiction and art — and, in the process, demonstrating how different windows on some of the same themes can be revelatory.” (Vol. 1 Brooklyn)

“Zambreno’s books have a way of getting under your skin, and her willingness to write ugly, to approach the banal and the cliché as just another tool and subvert it into works of rage and oftentimes real beauty, is part of the appeal. Screen Tests, her latest, pairs a first half composed of very short, very funny pieces of fiction with a second half of longer essays, and the effect is that of a particularly devastating form of déjà vu....in an era in which it feels as though we all constantly need to market ourselves, it’s refreshing to read a book that explicitly champions art that is raw, art that is messy, art that cannot be contained.” (The Paris Review)

"If Thomas Bernhard's and Fleur Jaeggy's work had a charming, slightly misanthropic baby—with Diane Arbus as nanny—it would be Screen Tests. Kate Zambreno turns her precise and meditative pen toward a series of short fictions that are anything but small. The result is a very funny, utterly original look at cultural figures and tropes and what it means to be a human looking at humans.” (Amber Sparks)

“In Screen Tests, a voice who both is and is not the author picks up a thread and follows it wherever it leads, leaping from one thread to another without quite letting go, creating a delicate and ephemeral and wonderful portrait of how a particular mind functions. Call them stories (after Lydia Davis), reports (after Gerald Murnane), or screen tests (inventing a new genre altogether like Antoine Volodine). These are marvelously fugitive pieces, carefully composed while giving the impression of being effortless, with a quite lovely Calvino-esque lightness, that are a joy to try to keep up with.” (Brian Evenson)

Kate Zambreno is also the author of two novels and three books of nonfiction. She lives in New York and teaches writing at Columbia University and Sarah Lawrence College.

Rotten to the (Common) Core: Public Schooling, Standardized Tests, and the Surveillance State