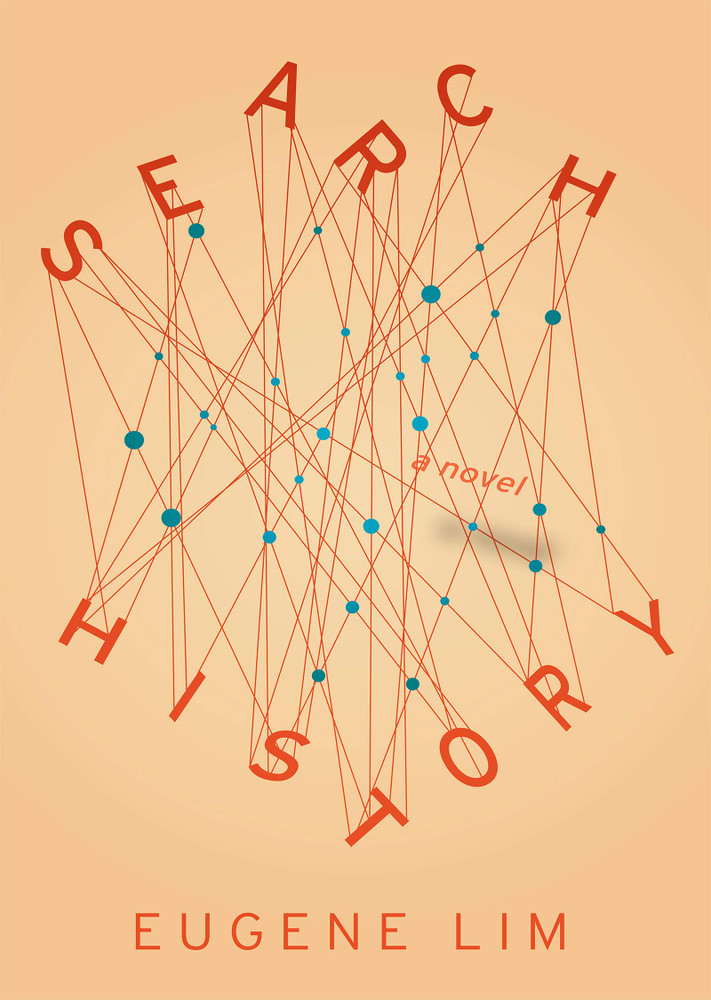 Frank Exit is dead—or is he? While eavesdropping on two women discussing a dog-sitting gig over lunch, a bereft friend comes to a shocking realization: Frank has been reincarnated as a dog! This epiphany launches a series of adventures—interlaced with digressions about AI-generated fiction, virtual reality, Asian American identity in the arts, and lost parents—as an unlikely cast of accomplices and enemies pursues the mysterious canine. In elliptical, propulsive prose, Search History plumbs the depths of personal and collective consciousness, questioning what we consume, how we grieve, and the stories we tell ourselves.

“As befits a book dealing with death and rebirth, the novel oscillates between the uncanny and the philosophical. . . . Lim brings together the mundane and the extraordinary to powerful effect.” —Kirkus, starred review

“A rabbit hole of grief and humor in equal measure. . . . Eugene Lim collages it all together masterfully. Suffice to say, it’s hard to describe to you exactly what happens in these gleefully experimental pages, but I will say this: It sort of feels like Italo Calvino’s If on a winter’s night a traveler and Jeanette Winterson’s Frankissstein had a baby that inherited its parents’ obsessions with storytelling and technology and their penchant for playfulness.” —Katie Yee, Literary Hub

“‘Pure art’ is the theme, plot, and struggle of the haunted characters in Eugene Lim’s novels. But book after book, pure art is what Eugene Lim makes. Every time I see a new Eugene Lim book on the shelves, I’m grateful. Looking for hope amid our capitalist doom, I read Search History with that exhilarating comfort I’ve felt in the best artists of their times, Petronius to Perec, Rabelais to Rizal—all of whom demonstrate a bracing commitment to challenging our ideological norms by testing without fear our art’s forms. Surveying our planetary wreck on Eugene Lim’s craft is to see our survival more clearly—through friendship’s grief, through love’s quest, through the bereaved trust that survivors must sustain in art.” —Gina Apostol

“Search History, Eugene Lim’s new masterpiece, is a novel of such richness, inventiveness, and strangeness that it rewards multiple readings. Lim has found a way to capture both the pointed specificity of the internet and its Borgesian infiniteness, in order to tell a picaresque tale about race and American culture, artificial intelligence, artmaking, storytelling, and so much more. Oh, and then this is also a novel about a dog! Search History is utterly original, from its opening pages to its final sentences.” —John Keene

“Eugene Lim’s forthcoming Search History is a thoroughly unconventional novel that explores the depths of human emotion with ingenuity and style. Readers will be kept on their toes by its disconcerting narrative structure. The story alternates conversations between the narrator and friends that delve deep into the terrain of the philosophical—specifically questioning the subject position of artists of color—with a hijinks-filled quest to reclaim a dog believed to be the reincarnated form of a dead loved one. Lim’s devilish satire lends the story a sheen of humor and playfulness that does not detract from its vulnerability and profound meditations on the continuous processes of grieving and contending with one’s identity. Search History is a luminous, peerless work that establishes Lim as one of the best-suited authors to write about our distinct moment of environmental decay amidst technological advancement. A heartfelt delight from start to finish.” —Meghana Kandlur

“Transfixing from page to page, filled with digressive meditations on small talk and social protest, superheroes, terrorism, the art world, and the status of being marginal. . . . There’s an intoxicating, whimsical energy on every page. Everything from radical art to political protest gets absorbed into the rhythms of everyday life.” —Hua Hsu, The New Yorker

“A novel about art and resistance, and how they may spur each other on, or frustrate their respective goals. In structure it resembles the great mid-century metafictions. . . . Eugene Lim’s super-comrades, with their cultural disaffection and nuanced political opinions, offer a rather more compelling version of a collective consciousness.” —David Hobbs, Times Literary Supplement

“A novel of ideas, small, elegant ideas about art and protest, and one of the most striking literary works to emerge from the Occupy movement. . . . I had expected the decade's wave of protests to yield a raft of conventional social novels—some earnest, some satirical, perhaps not a few reactionary—but in Dear Cyborgs Lim has delivered something far more idiosyncratic, intricate, and useful: a novel that resists and subverts conventions at every turn." —Christian Lorentzen, New York Magazine

“I know I’m reading a good book when it makes me mutter, What is this? Eugene Lim’s slim and very weird Dear Cyborgs evoked that response in me plenty of times. . . . Dear Cyborgs is like the image inside a kaleidoscope, especially if that image comes from the midnineties cyberpunk-tinged dream of a middle-aged vegan asleep in Zuccotti Park circa 2011. In other words: it certainly keeps you on your toes.” —Jeffery Gleaves, The Paris Review

“Blew me away with its deceptively blithe mixture of cryptic humor, philosophical ingenuity, and genuine political yearning. It made me think of Robert Bolaño and Tom McCarthy. I’m hoping to reread it soon for inspiration.” —Jonathan Lethem, Chicago Review of Books

“Haunting. . . . Should vault [Lim] into the first rank of American writers.” —Ross Barkan, The Village Voice

“Surreal, unpredictable, and filled with protest. Lim packs an impressive range of topics into one slim and absorbing novel; everything from comic books to the avant garde to revolution gets its due. This constantly shifting ground seems to transmit a warily hopeful message: any number of possible futures are within our grasp—if not better, then at least different.” —Jess Bergman, Literary Hub

“Lim’s third novel might be the most delightful read you’ll find all summer. . . . Through seamlessly incorporated meditations on political protest and radical art, Dear Cyborgs is an effortless page turner that dares the reader to believe in the power of the imagination.” —Anelise Chen, The Village Voice

“A mind-bending, form-shifting book about superheroes, protest, the art world, Asian American friendship, and the abyss. What's most striking is how brilliantly (and seamlessly) Lim employs slippery narrative techniques in this novel in stories within conversations within dreams.” —James Yeh, VICE

“Cyborgs, comic-book superheroes, protesters in the streets, disenfranchised artists, first-generation immigrants struggling to assimilate—all these outsiders, outcasts, and oddballs have more in common with each other than one might think, as Eugene Lim’s novel Dear Cyborgs beautifully illustrates. Blending Hollywood chase scenes with sharp cultural critiques, hard-boiled detective pulps with subversive philosophy, Dear Cyborgs is a playful and profound meditation on resisting oppression and alienation.” —Work in Progress

“The most lucid book I’ve read lately. . . . It is rare to encounter self-aware, genre-spliced postmodernism that is this worldly and purposeful, or pop that is this utilitarian, serious, and searching, or timely state-of-the-nation reckonings that are this optimistic, open, and kindhearted. . . . Quite an achievement.” —J. W. McCormack, Electric Literature

“Relevant, important fiction in the time of political chaos. Superheroes and artistic characters fill the pages with musings and arguments about what matters and what’s vital in a life riddled with uncertainties.” —Sara Cutaia, Chicago Review of Books

“Does your book club love comic books? Does it dabble in metafiction? If so, look no further than Eugene Lim’s Dear Cyborgs, which is sure to be a unique but memorable choice. . . . This book changes gears quickly, and will keep readers on the edges of their seats as they zoom back and forth between our world and the realm of superheroes. Tell your book club to fasten their seatbelts: they’re in for a wild ride.” —Bookish

“An entertaining reflection on art, resistance, heroes, and villains. . . . Eerily reflective of our fractured times, darting from subject to subject with the speed of a mouse click. A colorful meditation on friendship and creation nested within a fictional universe.” —Kirkus

“Looking for an inventive story about a friend group of philosophically-minded superheroes? How about the tale of how comic books brought two young misfits together in suburban Ohio? Well, you’re in luck: in Dear Cyborgs, you can have both. . . . You might just find yourself charmed by this slim book of brusque sentences and odd, precise descriptions. And the last chapter’s union of the two narratives doesn’t disappoint.” —Charley Locke, WIRED

“Gleefully toying with the conventions of the novel, Dear Cyborgs weaves together the story of a friendship’s dissolution with a provocative and timely meditation on protest. Through a series of linked monologues, a lively cast of characters explores narratives of resistance—protest art, eco-terrorists, Occupy squatters, pyromaniacal militants—and the extent to which any of these can truly withstand and influence the cold demands of contemporary capitalism.” —Tor.com

“With comparisons to Tom McCarthy and Valeria Luiselli and praise from Gary Lutz and Renee Gladman, Lim’s work is worth seeking out.” —The Millions

“A novel of the future. It’s surprising, and—while giving despair its full measure—it’s surprisingly inspiring. A Bolaño-esque labyrinth of shaggy-dog stories flow through the narrator, describing the existential and physical conditions of a present in which it’s easier to imagine the end of the world than the end of capitalism, but it’s written in calm and succinct, elegant prose. Lim nails the amnesia of sensory overload perfectly.” —Chris Kraus

“Eugene Lim tells his sly superhero tales in a kind of hard-boiled deadpan—a voice at once incongruously comic and playfully soulful. Beneath the dry wit there’s an ache of loneliness, an echo of every comic-book reader’s yearning for the camaraderie of the super team, the intimate enmity of the nemesis.” —Peter Ho Davies

“Eugene Lim's Dear Cyborgs is a mad badass fan letter to comicdom and a chastening reminder of how America’s greatest fantasy doesn't involve superheroes with superpowers but the prospect of a fair and honest political life. Go read it in the streets.” —Joshua Cohen

Praise for The Strangers:

“Beautifully written, so precise and accurate to real life that it is (fantastically) convincing, Eugene Lim's The Strangers, with its multiple interwoven strands, reveals one surprising character and relationship after the next, and culminates in a skillfully devised and satisfying resolution. A fascinating and engrossing tale.” —Lydia Davis

“Beautiful, original, with delicious surprises lurking at the heart of sentences, of events, of all the engines of communication.” —Harry Mathews

“The Strangers is like a cabinet of curiosities put together by Georges Perec and Andrei Biely. . . . A total pleasure.” —Susan Daitch

“To place the storytelling act at the center of a novel is a risky strategy: the stories must fascinate. Lim's stories do.” —Review of Contemporary Fiction

Eugene Lim is the author of the novels Fog & Car (Ellipsis Press, 2008), The Strangers (Black Square Editions, 2013), and Dear Cyborgs (FSG Originals, 2017). His writings have appeared in the Brooklyn Rail, the Baffler, Dazed, Fence, Little Star, Granta, and elsewhere. He is a high school librarian, runs Ellipsis Press, and lives in Queens, NY, with Joanna and Felix.