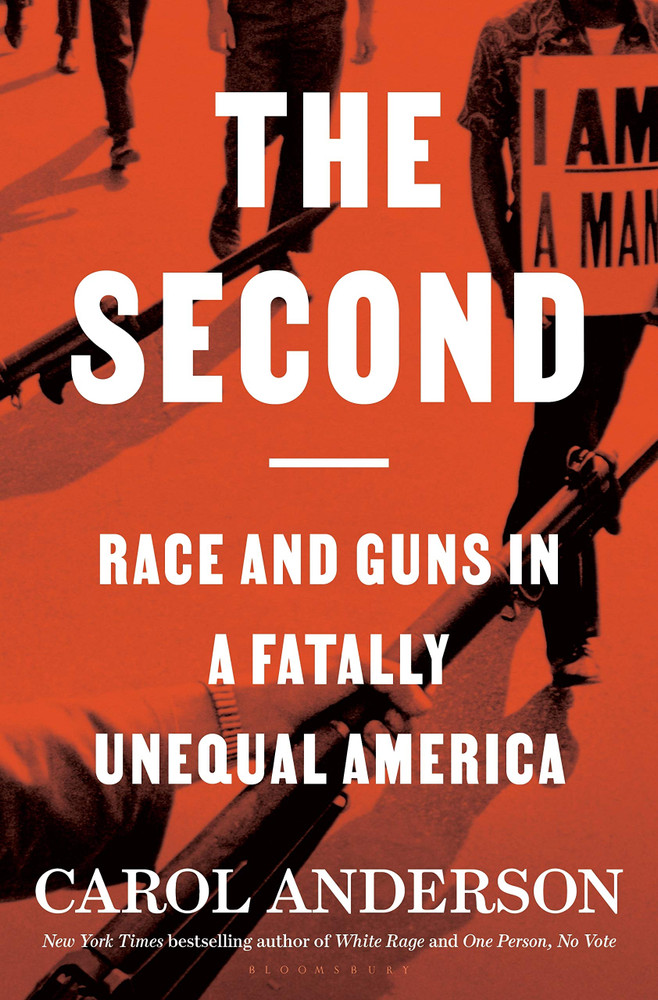 Second: Race and Guns in a Fatally Unequal America

From the New York Times bestselling author of White Rage, an unflinching, critical new look at the Second Amendment--and how it has been engineered to deny the rights of African Americans since its inception.

In The Second, historian and award-winning, bestselling author of White Rage Carol Anderson powerfully illuminates the history and impact of the Second Amendment, how it was designed, and how it has consistently been constructed to keep African Americans powerless and vulnerable. The Second is neither a “pro-gun” nor an “anti-gun” book; the lens is the citizenship rights and human rights of African Americans.

From the seventeenth century, when it was encoded into law that the enslaved could not own, carry, or use a firearm whatsoever, until today, with measures to expand and curtail gun ownership aimed disproportionately at the African American population, the right to bear arms has been consistently used as a weapon to keep African Americans powerless--revealing that armed or unarmed, Blackness, it would seem, is the threat that must be neutralized and punished.

Throughout American history to the twenty-first century, regardless of the laws, court decisions, and changing political environment, the Second has consistently meant this: That the second a Black person exercises this right, the second they pick up a gun to protect themselves (or the second that they don't), their life--as surely as Philando Castile's, Tamir Rice's, Alton Sterling's--may be snatched away in that single, fatal second. Through compelling historical narrative merging into the unfolding events of today, Anderson's penetrating investigation shows that the Second Amendment is not about guns but about anti-Blackness, shedding shocking new light on another dimension of racism in America.

“The second amendment, as Carol Anderson deftly establishes here, was written in the blood of enslaved black people. Our stalemated gun rights debates have focused on the idea that the second amendment preserves liberty rather than its historic role in denying it. This book does a great deal to change the parameters of that conversation.” - Jelani Cobb, New Yorker staff writer, author of THE SUBSTANCE OF HOPE

“In this extraordinarily important book, Dr. Anderson shows that the Second Amendment was designed, and has always been implemented, to enable white Americans to dominate their Black neighbors. In her trademark engaging and unflinching prose, Dr. Anderson traces America’s racist history of gun laws from the 1639 Virginia colony’s prohibition on Africans carrying guns to the recent police murders of Breonna Taylor and Emantic Bradford, Jr., showing how calls for ‘law and order’ have concentrated guns in the hands of white people while defining Black gun ownership as a threat to society. Anderson’s deft scholarship convincingly places the right to use force at the center of American citizenship, and warns that the Second Amendment, as it is currently exercised, guarantees that Black Americans will never be equal.” - Heather Cox Richardson, author of HOW THE SOUTH WON THE CIVIL WAR

“Carol Anderson brings her brilliant analytical framing to one of our most pressing issues: the proliferation of guns and the epidemic of American gun violence. She reveals the racial hypocrisy inherent in Second Amendment defenses of gun rights. The Second is a must-read for students of American History.” - Natasha Trethewey, Pulitzer Prize-winning poet, former U.S. Poet Laureate, author of MEMORIAL DRIVE

“Carol Anderson brings her storied sense of the intertwining of past and present, her keen insights into the wiles of racism, and her passionate prose to this extraordinary take on the meaning of the Second Amendment. This is a necessary history of the roots of gun obsession in slavery, racial assumptions, legal and political fictions that may have put America on a ‘fatal’ spiral we can only hope to prevent. Let's dream that this book echoes across the partisan canyon.” - David W. Blight, Yale University, author of the Pulitzer Prize-winning FREDERICK DOUGLASS: PROPHET OF FREEDOM

“Like Anderson’s previous works, this is essential for everyone interested in U.S. history.” - Library Journal, starred review

“A powerful consideration of the Second Amendment as a deliberately constructed instrument of White supremacy. . . . An urgent, novel interpretation of a foundational freedom that, the author makes clear, is a freedom only for some.” - Kirkus Reviews, starred review

“The Second is written with verve, painted with broad strokes and dotted with memorable anecdotes and vivid quotations.” - Randall Kennedy, The New York Times Book Review

“The historian Carol Anderson thinks that America’s singular relationship with guns reflects its singular history of racism. . . . Anderson’s book is a bracing reminder that the defense of rights is not necessarily a liberatory project.” - The New Yorker's "Critic's Notebook"

“[A] powerful indictment . . . Anderson illustrates, often in vividly disturbing detail, the brutal reprisals that have occurred whenever African Americans sought justice on this issue, and the litany of counterattacks by police, politicians, the military, and the courts cements the unassailable veracity of her argument. . . . In her passion and precision, Anderson presents a uniquely positioned, persuasive, and unflinching look at yet another form of deadly systemic racism in American society that has stoked the centuries-long crimes of insecurity, inequality, and injustice.” - Booklist, starred review

“Absorbing . . . With the nation reeling from a spate of mass shootings and President Biden again pushing for common-sense gun reform, The Second, available June 1, is as timely as some of Anderson’s best known books. . . . The Second adds another dimension to the gun debate and proves that it is stained with the anti-Blackness mindset that disfigures every debate from voting to housing, from education to health care.” - Boston Globe

“The author of the award-winning White Rage targets the Second Amendment in all its moral and legal travesties. From James Madison’s capitulation to a slavery-obsessed Patrick Henry, right up to last year’s bloody rampage in Kenosha, Wisconsin, Anderson strikes the perfect balance between righteous wrath and intellectual rigor.” - Oprah Daily, "20 of the Best New Summer Books to Pick Up This June"

“[The Second is] an important intervention in the ongoing debate over gun control. . . . It’s an eye-opening, enraging account that every politician should read as they fight on both sides of the aisle to either progress or curtail gun-control legislation.” - Bitch, "BitchReads: 17 Books Feminists Should Read in June”

“Though one needn’t look too far beyond the recent murders of Philando Castile and Alton Sterling to see that so-called legal gun ownership is not a right―at least in practice―extended to Black Americans, Anderson follows this country’s fixation on weaponized liberty back to its founding mythologies, and all the exclusionary rhetoric found therein.” - Literary Hub’s “Nonfiction Books You Should Read This Summer”

“[Anderson's] new book, The Second: Race and Guns in a Fatally Unequal America, examines how the Second Amendment has historically been used to keep Blacks in America powerless. . . . She writes about Philando Castile a Black Twin Cities man who was shot while reaching for his driver's license after letting the police officer know he had a ‘legally permitted, right-to-carry concealed gun. That was all the cop needed to know: Officer Jeronimo Yanez began shooting.” - Minneapolis Star Tribune

“New York Times bestselling author of White Rage, Carol Anderson offers an honest and previously disregarded account of the Second Amendment and the way it has punished Black people for centuries. . . . Anderson offers a ‘penetrating investigation show[ing] that the Second Amendment is not about guns but about anti-Blackness,’ bringing to life the horrible truth behind another untold aspect of racism in America.” - The Root's "Summer Reading Round-Up"

“When it comes to the Second Amendment, the “right to bear arms” is not universal but, instead, almost always applies exclusively to white men. But it’s more than that, as Carol Anderson argues in The Second: Race and Guns in a Fatally Unequal America, because the deeper issue is that Black people, whether armed or unarmed, are treated by most of this country as a threat. And while debates around the Second Amendment focus on whether an individual’s right to own a gun or join a militia outweigh collective safety (or vice versa), Anderson―a professor of African American Studies at Emory University and author of the 2016 best-seller White Rage―takes a strikingly different approach.” - The Progressive

“Dr. Carol Anderson’s latest book is essential for anyone concerned about the Second Amendment and its impact on African Americans in the US. Anderson deftly turns the debate over gun rights on its head by changing the framework to one of anti-Blackness, vulnerability and oppression.” - Ms. Magazine

Carol Anderson is the Charles Howard Candler Professor and Chair of African American Studies at Emory University. She is the author of One Person, No Vote, longlisted for the National Book Award and a finalist for the PEN/John Kenneth Galbraith Award; White Rage, a New York Times bestseller and winner of the National Book Critics Circle Award; Bourgeois Radicals; and Eyes off the Prize. She was named a Guggenheim Fellow for Constitutional Studies and is a member of the American Academy of Arts and Sciences. She lives in Atlanta, Georgia.