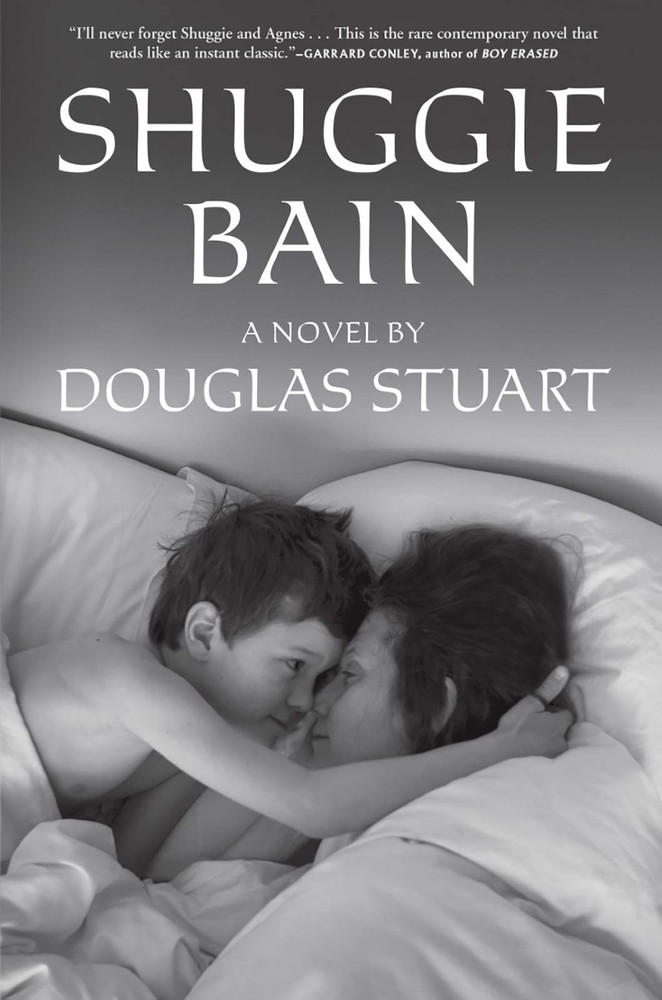 LONGLISTED FOR THE BOOKER PRIZE

Shuggie Bain is the unforgettable story of young Hugh “Shuggie” Bain, a sweet and lonely boy who spends his 1980s childhood in run-down public housing in Glasgow, Scotland. Thatcher’s policies have put husbands and sons out of work, and the city’s notorious drugs epidemic is waiting in the wings.

Shuggie’s mother Agnes walks a wayward path: she is Shuggie’s guiding light but a burden for him and his siblings. She dreams of a house with its own front door while she flicks through the pages of the Freemans catalogue, ordering a little happiness on credit, anything to brighten up her grey life. Married to a philandering taxi-driver husband, Agnes keeps her pride by looking good—her beehive, make-up, and pearly-white false teeth offer a glamourous image of a Glaswegian Elizabeth Taylor. But under the surface, Agnes finds increasing solace in drink, and she drains away the lion’s share of each week’s benefits—all the family has to live on—on cans of extra-strong lager hidden in handbags and poured into tea mugs. Agnes’s older children find their own ways to get a safe distance from their mother, abandoning Shuggie to care for her as she swings between alcoholic binges and sobriety. Shuggie is meanwhile struggling to somehow become the normal boy he desperately longs to be, but everyone has realized that he is “no right,” a boy with a secret that all but him can see. Agnes is supportive of her son, but her addiction has the power to eclipse everyone close to her—even her beloved Shuggie.

A heartbreaking story of addiction, sexuality, and love, Shuggie Bain is an epic portrayal of a working-class family that is rarely seen in fiction. Recalling the work of Édouard Louis, Alan Hollinghurst, Frank McCourt, and Hanya Yanagihara, it is a blistering debut by a brilliant novelist who has a powerful and important story to tell.

“We were bowled over by this first novel, which creates an amazingly intimate, compassionate, gripping portrait of addiction, courage and love. The book gives a vivid glimpse of a marginalized, impoverished community in a bygone era of British history. It’s a desperately sad, almost-hopeful examination of family and the destructive powers of desire.”—Booker Prize Judges

“The body—especially the body in pain—blazes on the pages of Shuggie Bain . . . This is the world of Shuggie Bain, a little boy growing up in Glasgow in the 1980s. And this is the world of Agnes Bain, his glamorous, calamitous mother, drinking herself ever so slowly to death. The wonder is how crazily, improbably alive it all is . . . The book would be just about unbearable were it not for the author’s astonishing capacity for love. He’s lovely, Douglas Stuart, fierce and loving and lovely. He shows us lots of monstrous behavior, but not a single monster—only damage. If he has a sharp eye for brokenness, he is even keener on the inextinguishable flicker of love that remains . . . The book leaves us gutted and marveling: Life may be short, but it takes forever.”—Leah Hager Cohen, New York Times Book Review

“Agnes Bain [is] the unforgettable human train wreck at the center of Douglas Stuart’s novel Shuggie Bain . . . Titling the novel after Shuggie rather than the woman who dominates him seems like a small gesture of defiance on Mr. Stuart’s part . . . Mr. Stuart vividly inhabits the city’s singular ‘Weegie’ dialect and vocabulary . . . It’s the obstinate Bain pride that prevents this novel from becoming a wallow in victimhood and gives it its ruined dignity.”—Sam Sacks, Wall Street Journal

“Not only does [Stuart] clearly know his characters, he clearly loves them . . . Stuart describes their life with compassion and a keen ear for language . . . Such is Stuart’s talent that this painful, sometimes excruciating story is often quite beautiful.”—Barbara Lane, San Francisco Chronicle

“Shuggie Bain is Douglas Stuart’s first novel, as intense and excruciating to read as any novel I have ever held in my hand . . . This novel is as much about Glasgow as it is about Shuggie and his impossible mother . . . The book’s evocative power arises out of the author’s talent for conjuring a place, a time, and the texture of emotion, and out of its language which is strewn with a Glaswegian argot sodden with desolation and misery . . . This is a hard, grim book, brilliantly written and, in the end, worth the pain which accompanies reading it.”—Katherine A. Powers, Newsday

“With his exquisitely detailed debut novel, Douglas Stuart has given Glasgow something of what James Joyce gave to Dublin. Every city needs a book like Shuggie Bain, one where the powers of description are so strong you can almost smell the chip-fat and pub-smoke steaming from its pages, and hear the particular, localized slang ringing in your ears . . . It turns over the ugly side of humanity to find the softness and the beauty underneath . . . This beauty, against all odds, survives.”—Eliza Gearty, Jacobin

“An atmospheric epic set in 1980s working-class Glasgow, Shuggie Bain, a debut novel by Douglas Stuart, focuses on the relationship between a mother and son as she battles alcoholism and he grapples with his sexuality. It’s a formidable story, lyrically told, about intimacy, family, and love.”—Elle

“Magnificent . . . Its richly rendered events will give you a lot to talk about.”—O, the Oprah Magazine

“A heartbreaking story about identity, addiction, and abandonment.”—TIME

“An instant classic. A novel that takes place during the Thatcher years and, in a way, defines it. A novel that explores the underbelly of Scottish society. A novel that digs through the grit and grime of 1980s Glasgow to reveal a story that is at once touching and gripping. Think D.H. Lawrence. Think James Joyce . . . A literary tour de force.”—Washington Independent Review of Books

“Douglas’s sharp narrative perspective moves from character to character, depicting each internally and externally with astute grace, giving a complex understanding of the dynamics of the Bain family . . . Shuggie Bain is a master class in depicting the blinding dedications of love and the endless bounds to which people will go to feel in control, to feel better. It hopefully sets the tone for more beautifully devastating works of fiction to follow from Stuart in the future.”—Columbia Journal

“Heartfelt and harrowing . . . [A] visceral, emotionally nuanced portrayal of working class Scottish life and its blazingly intimate exploration of a mother-son relationship.”—Literary Hub

“The way Irvine Welsh’s Trainspotting carved a permanent place in our heads and hearts for the junkies of late-1980s Edinburgh, the language, imagery, and story of fashion designer Stuart’s debut novel apotheosizes the life of the Bain family of Glasgow . . . The emotional truth embodied here will crack you open. You will never forget Shuggie Bain. Scene by scene, this book is a masterpiece.”—Kirkus Review (starred review)

“Compulsively readable . . . In exquisite detail, the book describes the devastating dysfunction in Shuggie’s family, centering on his mother’s alcoholism and his father’s infidelities, which are skillfully related from a child’s viewpoint . . . As it beautifully and shockingly illustrates how Shuggie ends up alone, this novel offers a testament to the indomitable human spirit. Very highly recommended.”—Library Journal (starred review)

“Douglas Stuart’s anxious novel is both a tragedy and a survival story. Shuggie is as neglected as Glasgow, but through his mother’s demise, he discovers his strength. Shuggie Bain celebrates taking charge of one’s own destiny.”—Bookpage

“Stuart’s harrowing debut follows a family ravaged by addiction in Glasgow during the Thatcher era . . . There are flashes of deep feeling that cut through the darkness . . . Will resonate with readers.”—Publishers Weekly

“There’s no way to fake the life experience that forms the bedrock of Douglas Stuart’s wonderful Shuggie Bain. No way to fake the talent either. Shuggie will knock you sideways.”—Richard Russo, author of Chances Are

“Every now and then a novel comes along that feels necessary and inevitable. I’ll never forget Shuggie and Agnes or the incredibly detailed Glasgow they inhabit. This is the rare contemporary novel that reads like an instant classic. I’ll be thinking and talking about Shuggie Bain—and teaching it—for quite some time.”—Garrard Conley, New York Times-bestselling author of Boy Erased

“A rare and haunting ode to 1980s Glasgow and its struggling communities, Shuggie Bain tells the story of a collapsing family that is lashed together by love alone. Douglas Stuart writes with startling, searing intimacy. I fell hard for these characters; when they have nothing left, they cling maddeningly—irresistibly—to humor, pride and hope.”—Chia-Chia Lin, author of The Unpassing

“Shuggie Bain is an intimate and frighteningly acute exploration of a mother-son relationship and a masterful portrait of alcoholism in Scottish working class life, rendered with old-school lyrical realism. Stuart is a writer who genuinely loves his characters and makes them unforgettable and touching even when they're at their worst. He’s also just a beautiful writer; I kept being reminded of Joyce’s Dubliners. I loved this book.”—Sandra Newman, author of The Heavens

“A dark shining work. Raw, formidable, bursting with tenderness and frailty. The effect is remarkable, it will make you cry.”—Karl Geary, author of Montpelier Parade

Douglas Stuart was born and raised in Glasgow. After graduating from the Royal College of Art in London, he moved to New York City, where he began a career in fashion design. Shuggie Bain is his first novel.