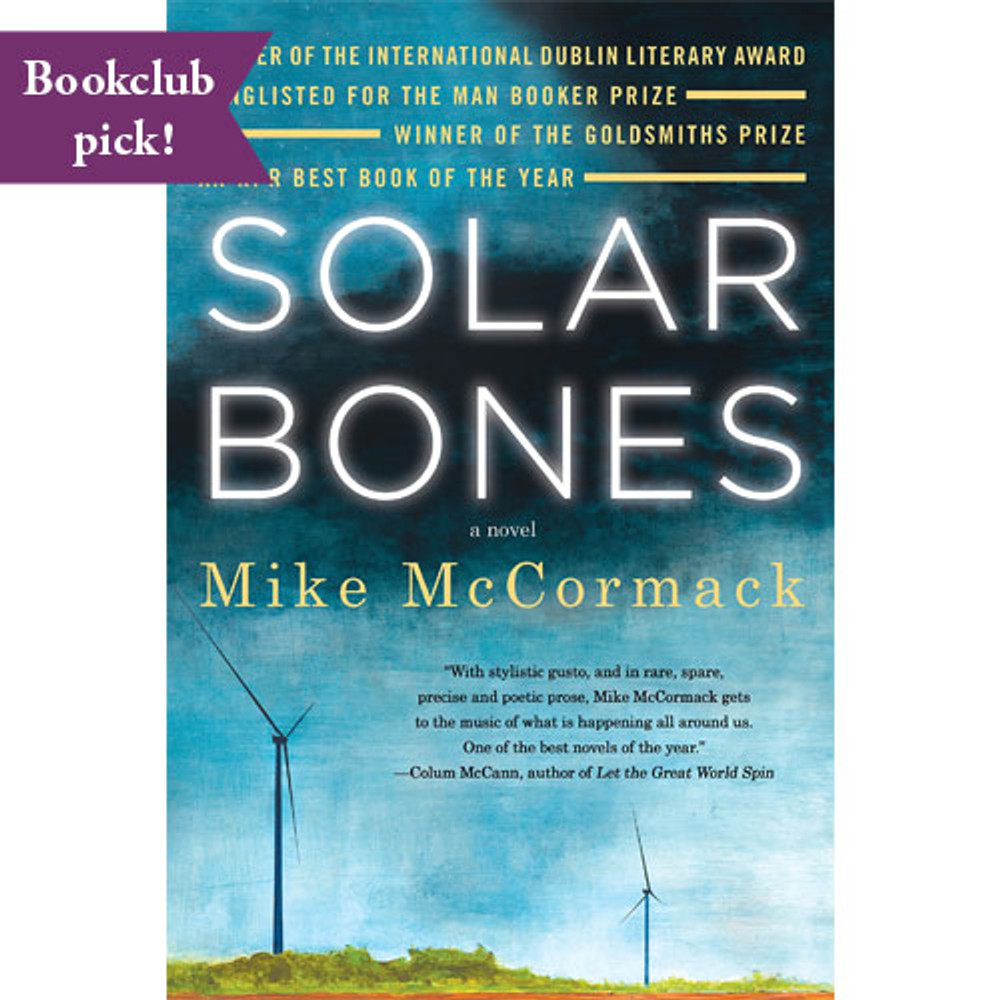 This title is our February 2019 pick for the UNICORN BOOKCLUB! Find out more here.

A vital, tender, death-haunted work by one of Ireland’s most important contemporary writers, Solar Bones is a celebration of the unexpected beauty of life and of language, and our inescapable nearness to our last end. It is All Souls Day, and the spirit of Marcus Conway sits at his kitchen table and remembers. In flowing, relentless prose, Conway recalls his life in rural Ireland: as a boy and man, father, husband, citizen. His ruminations move from childhood memories of his father’s deftness with machines to his own work as a civil engineer, from transformations in the local economy to the tidal wave of global financial collapse. Conway’s thoughts go still further, outward to the vast systems of time and history that hold us all. He stares down through the “vortex of his being,” surveying all the linked circumstances that combined to bring him into this single moment, and he makes us feel, if only for an instant, all the terror and gratitude that existence inspires.

"Wonderfully original, distinctly contemporary . . . Where modernism took a world that appeared to be whole and showed it to be broken, Solar Bones takes a world that can't stop talking about how broken it is, and suggests it might possibly be whole."
—The New York Times Book Review

"With stylistic gusto, and in rare, spare, precise and poetic prose, Mike McCormack gets to the music of what is happening all around us. One of the best novels of the year."
—Colum McCann, author of Let the Great World Spin and TransAtlantic

"Pure enchantment from an otherworldly talent. I admired the hell out of this book."
—Eleanor Catton, Man Booker Prize–winning author of The Luminaries

"Mike McCormack has created a narrative of such power and precision . . . The book, ​contemporary and tragic and funny,​ is ​a delight."
​​ —​NPR.org​

"The ordinary is hallowed by the originality of its expression . . . the writing is so precise and consistent. Solar Bones is a successful experimental novel, but more than that it is a good human story."
—​The Wall Street Journal​
​
"​A Joycean novel about illness, suffering and work​ . . . ​remarkable . . . poetic​. It is the vivid attention to detail, both in Ulysses, James Joyce’s masterpiece, and in Solar Bones, which make both these novels resonate like that evening bell."
​​—The Economist

"Excellence is always rare and often unexpected: we don’t necessarily expect masterpieces even from the great. Mike McCormack’s Solar Bones is exceptional indeed: an extraordinary novel by a writer not yet famous but surely destined to be acclaimed by anyone who believes that the novel is not dead and that novelists are not merely lit-fest fodder for the metropolitan middle classes."
—The Guardian

"A heady rumination on modern life as otherworldly as it is grounded in reality."
—Entertainment Weekly

"Extraordinary . . . an intoxicating experimental novel. Such experimentation may make some people hesitant; don’t be, the prose flows more like poetry, and is a sombre joy to read."
—Financial Times​

"A​ beautiful and strangely compulsive read​."
​​—The Sunday Times (UK)​

“Astonishing talent . . . Solar Bones is a lyrical masterpiece, of a surprisingly accessible kind, that almost demands to be read aloud.”
—The Sydney Morning Herald

“As in Don DeLillo’s White Noise, it is the numinous, otherworldly qualities of modern life, rather than some fantastical future, that we are concerned with here . . . The work of an author in the full maturity of his talent, Solar Bones climaxes in a passage of savage, Gnostic religiosity: the writing catches fire as we draw near to the void, pass over into death itself, and therein confront the truth that even in a fallen universe, when all distractions tumble away, the only adequate response to our being is astonishment.”
—The Irish Times

"An impressive meditation, as Joyce would say, 'upon all the living and the dead' . . . Mike McCormack is a gifted Irish writer."
—​Minneapolis Star Tribune​

"One-of-a-kind. McCormack is a wonderfully accessible, quick-witted writer—and, with references to Radiohead, Mad Max, and the post-millennial Battlestar Galactica, a smartly contemporary one. The book is alive with startling connections between the exterior and interior worlds . . . an irresistible driving rhythm. It's a book that demands a second reading and readings of the author's other books . . . This transcendent novel should expand McCormack's following on this side of the Atlantic and further establish him as a heavyweight of contemporary Irish fiction along with the likes of Anne Enright and Kevin Barry."
—Kirkus Reviews, Starred Review

"The latest from McCormack is a beautifully constructed novel that blends Beckett’s torrential monologues with a realist portrait of small-town Ireland. This is an intelligent, striking work."
—​Publishers Weekly, Starred Review​

"​Solar Bones by Mike McCormack is a luminous poem cloaked in the form of a novel. Sentences swoop and soar with flowing, almost musical language, building to a climax of insight and grace. McCormack proves himself to be a genius of language and form​."
—Shelf Awareness, Starred Review​

"Mike McCormack’s harrowing novel, Solar Bones, is brave and audacious, humane and concerned. A gem of a novel."
​​—CounterPunch ​

"In radiant, exquisite prose, Mike McCormack dilates time, erasing the line between the external, concrete world and the interior world of thought and feeling, memory and soul. Solar Bones is a deeply affecting, mesmerizing and quietly astonishing novel."
—Dana Spiotta, author of Innocents and Others

​"​McCormack’s novel embraces a rich panorama of working life, spiritual contemplation, and musings over Ireland’s economic woes. Deserving a readership far larger than Irish-literature devotees, this is a work of bold risks and luminous creativity.​"​
​​ —Booklist​

"A deeply felt, discursive celebration of Life . . . ​unquestionably art of the highest order. [Solar Bones] regularly resembles both John Burnside and W.G. Sebald, two writers similarly haunted by many of McCormack’s preoccupations. ​"
—​The Mookse and the Gripes

"McCormack is one of our bravest and most innovative writers—he shoots for the stars with this one and does not fall short."
—Kevin Barry, author of Beatlebone

"One of the finest novels I’ve read in some time. Mike McCormack has long been a powerhouse on the Irish literary map, beloved by readers in the know, but with Solar Bones he has taken things to another level; the rendering of life and death is beautiful, generous and true, the language and its handling is marvelous and new, the reckoning with power and its cruelties is exactly as frank and relentless as such a reckoning needs, now, to be. A pure and genuinely inspired vision; a brilliant mind charging on."
—Belinda McKeon, author of Tender

"Solar Bones is like nothing I've read, an experimental novel about love, engineering, and contaminated water that hits all three of its targets: heart, head, and guts. This book gushes blood, and McCormack's wondrous feat is to chart its movements with an engineer's precision and a poet's ear. Solar Bones will draw comparisons to Ulysses, and certainly its fluid stream-of-conscious would do Joyce proud, but I was also reminded of another Irish novel, Roddy Doyle's The Commitments—or, at least, the soundtrack to its film adaptation—with its heavy concentration of blue-eyed soul. This is a rare and beautiful novel, and one I won't soon forget."
—Adam Wilson, author of Flatscreen

"A masterpiece."
—Blake Morrison, author of And When Did You Last See Your Father?

"Difficult to put down. This is prose that reads as if it is being thought . . . reduced me to tears."
—New Statesman

"Mike McCormack's Solar Bones, with its one calmly unspooling sentence, hearkens back to the great modernist novels, but also moves forward from the present with all the urgency and anxiety of our fraught new century. This is the kind of novel a reader yearns for, one that illuminates what it means to be here now. It's nothing short of a masterpiece."
—Stephen Sparks, Point Reyes Books

"Solar Bones is one of those books that comes around once every few years and kicks the crap out of you. Mike McCormack creates a terrifyingly real and startling world through the eyes of the late Marcus Conway, a civil engineer who reflects upon his life in one long transcendent, stream-of-conscious narrative. Memories bleed into one another, as the ghost of a man sits at his kitchen table and recalls event after event, which tip into one another satisfyingly, until we're left with a portrait of a man situated in the twenty-first century, where global catastrophes and politics threaten and impact our sometimes isolate bubbles of everyday life. Almost Knausgaardian in spirit, this novel celebrates and honors the working man's life—failures, successes, and all the idleness and fate sandwiched in between."
—John Gibbs, Green Apple Books on the Park

Mike McCormack is an award-winning novelist and short story writer from County Mayo in Ireland. His previous work includes Forensic Songs; Notes from a Coma, which was shortlisted for the Irish Book of the Year Award; Crowe’s Requiem; and Getting It in the Head, which was awarded the Rooney Prize for Irish Literature and was a New York Times Notable Book of the Year. He lives in Galway.

American Eclipse: A Nation's Epic Race to Catch the Shadow of the Moon and Win the Glory of the World

Red at the Bone

Drive Your Plow Over the Bones of the Dead